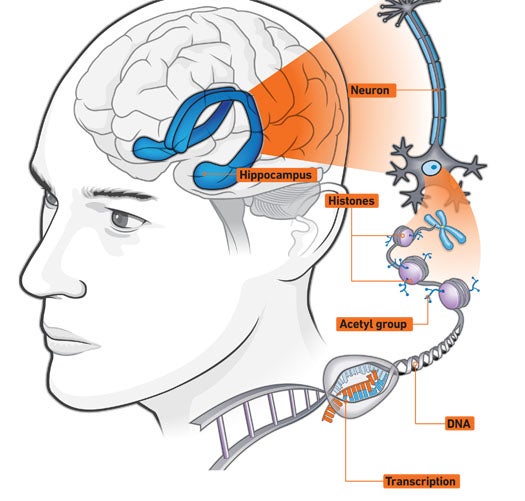 Age-related memory loss—the kind where you remember friends from decades ago but can’t remember your grandchildren—is largely a mystery, but a class of com-pounds used to treat cancer has given neuroscientists clues to its molecular underpinnings. Scientists also suspect that the compounds responsible for this insight, called histone deacetylase inhibitors, could significantly slow memory loss—perhaps for years. (Two drugs used now to treat memory loss and Alzheimer’s disease work only for a short time.) A study on aging mice by scientists at the European Neuroscience Institute in Germany published this May in Science showed that histone deacetylase inhibitors helped mice perform more than 50 percent better on a memory test than controls did. Study co-author André Fischer says these drugs would be used together with others to treat Alzheimer’s patients.

HOW WE MAKE MEMORIES
The process of forming long-term memories—those that persist for more than a few dozen seconds—is poorly understood, but here’s what we know: Neuroscientists have evidence that the brain’s hippocampus is central to the process. To consolidate a memory, a cascade of electrical pulses fire across the gaps between neurons, called synapses. This triggers the release of neurotransmitters, which form new connections between neighboring neurons. But neurotransmitters can’t be synthesized without each cell tapping into its DNA.

HOW GENES AFFECT MEMORY
Long-term memories are less likely to be formed if certain genes are not activated, which is why it’s at the genetic level that scientists are trying to effect change. Normally, inside cell nuclei, DNA tightly wraps around a protein spool, called a histone. A small molecule called an acetyl group attaches to a particular histone known as H4. When this happens, the DNA wrapped around the spool loosens slightly. The loosening of the DNA makes it more available for the biological process, called transcription, that permits the gene to be expressed into neurotransmitters.

HOW MEMORY IS LOST
In age-related memory loss, the H4 histones don’t have enough acetyl groups attached to them. DNA remains tightly wound around the histone spool, so the genes on the spool that control memory formation remain suppressed.

HOW WE MIGHT GET IT BACK
To reverse the memory loss, doctors inject a compound called a histone deacetylase inhibitor. It ensures that the H4 histones have plenty of attached acetyl groups, so the DNA wrapped around the histone once again becomes available for transcription. The memory-formation instructions encoded in the DNA can be used to make proteins, helping restore memory formation.

I’M STILL PRETTY YOUNG, SO WHY CAN’T I REMEMBER WHERE I PUT MY KEYS?
Cut yourself some slack. Occasional memory glitches can be caused by something as simple as not paying attention to your surroundings, lowering the likelihood that a particular memory will be encoded. Even though these glitches are more common after 40, in most cases, they don’t signify the onset of early senility. You probably don’t need to worry unless you start forgetting a good portion of your vocabulary or losing the capacity to do easy math problems.

HOW CAN I TELL IF I MIGHT LOSE MY MEMORY LATER IN LIFE?
You can’t know for sure. But you may be more at risk if you have high cholesterol, a family history of dementia, drink heavily, or participate in sports that involve multiple blows to the head.

HISTONE: Histones are crucial in the process of condensing and packing DNA within a cell’s nucleus. An octa-mer of histones package DNA into a structure called a nucleosome. Histone H4 is one of five histone groups.