The truth is out there, and yesterday a group of retired Air Force officers gathered the media and a handful... 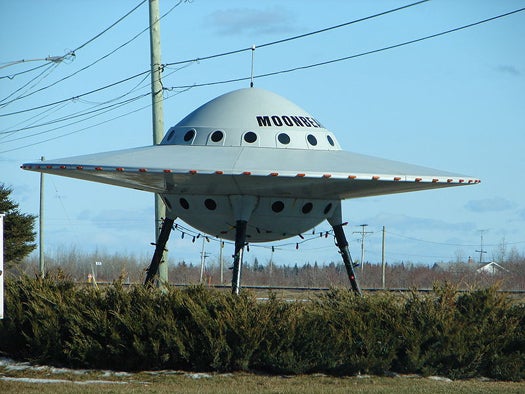 The truth is out there, and yesterday a group of retired Air Force officers gathered the media and a handful of well-wishers at the National Press Club in Washington, D.C., in an attempt to reveal what they say is a government cover-up of decades of alien contact. The officers claimed, through their own individual accounts, that during the Cold War UFOs visited various USAF installations, but that’s just the precursor to a more remarkable assertion: the aliens were tampering with our nukes.

Gathered by well-known UFO researcher Rober Hastings, the officers all individually gave similar accounts – that sometime between 1963 and 1980 each was present at nuclear missile sites when unexplained flashing lights appeared in the sky at the same time the missiles went form alert status to non-responsive.

In one account, retired targeting officer Robert Jamison said all 10 missiles in his charge – known as a “flight” – went off alert status just as rumors of unidentified lights in the sky overhead swept through the base. Jamison didn’t see the UFO himself, but several others on the base witnessed the incident. The cause of his missiles going offline is unknown.

Of course, as Danger Room points out it would be tempting to blame an entire flight of nuclear warheads malfunctioning on unexplained phenomena rather than a far more explicable kind of occurrence known as human (or perhaps computer) error. But the fact that all of the officers – whose accounts took place at different times and installations – told similar stories with similar outcomes was a compelling enough narrative for the journalists on hand for the event.

Hastings and the officers don’t think their aliens are hostile in nature, but rather that they aimed to show humankind the error of its ways and how close it was to destroying itself during that period in history. And Hastings, for his part, thinks these kinds of incidents could be ongoing but the public just doesn’t know about them. Present along with the Air Force officers were a bevy of declassified documents depicting odd aerial phenomena recorded by the U.S. government over the years.

But what Hastings and the officers really want, they said, is the truth, like the details of Project Blue Book, an Air Force investigation running from 1947 to 1969 in which some 12,618 sighting were recored, 701 of which remain “unidentified.” According to Hastings and company, the government knows what’s going on and has been keeping it under wraps for decades.

“The American people have a right to know the facts,” Hastings told reporters. “This is a national security issues but it is (also) a need-to-know issue, a right-to-know issue. Citizens in every country on Earth should be let in on this secret.”