We're under a time crunch. 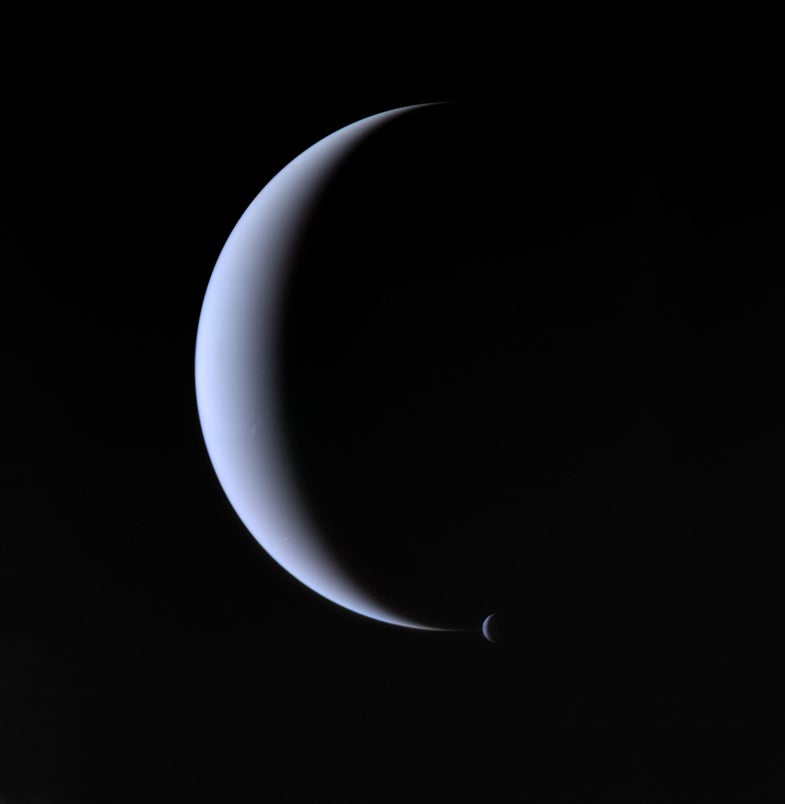 This crescent view of the outermost planet in the Solar System and its moon, Triton, is one of the last images recorded by Voyager 2 as it sped onward toward interstellar space, having surveyed all the gas giant worlds of the outer Solar System. Launched almost 40 years ago, we continue to receive transmissions from both Voyager spacecraft. Composite photograph. Voyager 2, August 31, 1989. NASA/JPL/Michael Benson/Kinetikon Pictures
SHARE

A new decade is just over a year away, and with it comes a whole new slate of NASA mission ideas, some near—like Mars—and others far. Very far. In fact, some folks are hoping for robotic journeys to worlds not just millions, but billions of miles away. This includes Uranus and Neptune (planets we visited in 1986 and 1989, respectively) and hundreds of icy bodies just beyond in a region known as the Kuiper Belt.

The Kuiper Belt is home to Pluto and thousands of other worlds of varying size. Most of the bodies there are made from the building blocks of our solar system, long since cordoned to distant cold-storage. Visiting the Kuiper Belt could unlock clues as to how our planet and its neighbors formed, why water is so abundant here, and other mysteries.

Uranus and Neptune are also quite mysterious in their own right. As we’ve learned more about other planetary systems, we’ve seen that most worlds aren’t large like Jupiter or small like Earth—a great number of them tend to be around the size of Uranus and Neptune, “ice giants” so-called for exotic states of water ice that exist deep beneath their cloud layers. Exploring Uranus and Neptune won’t just help us understand the planets of our solar system—it could also help us comprehend the ones orbiting nearby alien stars.

But many of these missions are time-dependent. NASA’s upcoming Decadal Survey—where the agency will set the tone for where we’ll send spacecraft in the 2020s and 2030s—could make or break these far-flung exploration schemes.

How the Decadal Survey goes down

Starting in 2020, a group from the National Academy of the Sciences (featuring several stakeholders in the space community) will gather to create a list of priority targets for exploration. Scientists toss their hats into the ring by writing recommendations known as “white papers.”

Out of those recommendations, a general consensus emerges on what the highest priority targets should be. Those targets serve as proposal guidelines for medium-class New Frontiers missions (New Horizons and the Juno probe at Jupiter were both in this category). NASA first puts out a call for mission proposals, then narrows those down incrementally to one or two finalists. Once a finalist gets the green light, the team behind it can finally begin planning and construction—which often takes years.

That could make it hard to have something ready in time for the actual windows needed to explore Uranus or Neptune while still hitting a Kuiper Belt Object. Here’s why the timing is so dicey.

A visit to the ice giant

One group in particular has been building the case for a dual Uranus/Neptune mission. Their most recent iteration involves a flyby of Uranus and an orbiter for Neptune. Led by Mark Hofstadter and Amy Simon, the goal is to peep a different side of Uranus than Voyager 2 saw in 1986, and to study Neptune and its largest moon Triton. Triton orbits backward, which could be because it was once the largest Kuiper Belt object—before Neptune pulled Triton into its grasp, forcing out many of the planet’s original moons.

Simon says the missions need to happen within a 15-year lifespan, including both in-transit time and exploration. This is due to how long the parts can last in space with relative certainty. While spacecraft can and do outlive their shelf life, 15 years is a bare minimum for making sure the mission can fulfill its scientific objectives at roughly full power. But how do you keep the journey from eating too much into the actual exploration phase? One way to speed up a spacecraft is to use the gravitational force of a planet for a boost in velocity.

“Typically, you need planetary flybys to get there in less than 12 years, and we usually include Earth and Venus flybys,” Simon says. In these scenarios, you dip into the gravity well of a planet, hoping for a slingshot effect that accelerates your craft further while using a minimum amount of fuel. “The best cases also use Jupiter, as it is the most massive and can really accelerate the spacecraft.”

New Horizons, for instance, used a Jupiter assist to zip over to Pluto. Cassini used four separate flybys to accelerate to Saturn after launching from Earth, getting a boost from Venus twice over, swinging right past Earth again to pick up more speed before getting a final swing from Jupiter.

Simon says to get to Uranus with enough time, you could use a Saturn flyby, which would have to happen between 2024 and 2028 to catch the gas giant at the right place in its 29-year orbit. That would take some pretty quick thinking by NASA standards—missions usually go through a decade of planning before launch, though some (New Horizons among them) have gone from planning to construction to launch within five years—so we’d probably be aiming for the next window, a Jupiter flyby in-between 2029 and 2032, which would also offer a prime slingshot for a mission to Neptune. The next chance wouldn’t come for more than a decade after.

A Uranus mission could use conventional fuels and vehicles to get to those slingshots in quick order—either an Atlas V rocket or a Delta IV Heavy, according to Simon. But because Neptune is so much farther away and the exact trajectory doesn’t line up quite as ideally, a mission to that planet would hinge more on the Space Launch System, NASA’s next generation heavy lift rocket (which still hasn’t seen a flight). If that isn’t ready in time, we’ll have to rely on a different next-gen technology: solar electric propulsion, which uses solar power to ignite ionized gas to accelerate a vehicle. So far, it’s only been employed on the Dawn spacecraft at Vesta and Ceres, and for two small asteroid missions.

“Even in the solar electric cases, you still need chemical engines, both for when solar is no longer sufficient and also to brake and get into orbit,” Simon says.

So the timing is a little tight. But if we execute them swiftly enough, both these missions could serve another purpose: getting to unexplored Kuiper Belt worlds.

Another paper, led by three members of the New Horizons team, looks at possibilities for getting back to the Kuiper Belt after their successful jaunt to Pluto. “We saw how interesting that was, and we wanted to know what else is out there,” says Tiffany Finley, principal engineer at the Southwest Research Institute (SWRI) and a co-author on the paper, set to be published in the Journal of Spacecraft and Rockets.

The Kuiper Belt contains the icy remains of the solar system’s formation, and the objects within are made of a dazzling array of different materials. For instance, Pluto is larger by a slim margin than Eris (known for unseating the former planet from its status). But Pluto is mostly made of ice, so it has far less mass. Eris has a large proportion of rock, making it more dense. Some worlds out there seem to have a lot of methane, while others have a lot of ammonia. It’s a bit like a garage sale of dwarf planets, with bits and baubles from our early history that are key to understanding how our planets came to be—and how other planetary systems may or may not resemble our own.

The team used narrow constraints: they gave the missions a 25-year shelf life and investigated the 45 brightest Kuiper Belt Objects, comparing them against a variety of planetary flyby scenarios. Jupiter unsurprisingly opened up most of the targets on the list. But a Jupiter window comes once every 12 years, making it still time-dependent. Simple flybys of Saturn yield a pretty good list of Kuiper Belt targets as well.

But when you pair those worlds with Uranus or Neptune, you get the chance to discover new things about our mysterious outermost planets and some fairly ideal outer dwarf planets with one fell swoop.

Getting to these worlds requires a slingshot effect, first from Jupiter and then from another planet. Each of those planets aligns with Jupiter in a narrow window in the 2030s, and neatly divide into certain parts of that decade. For instance, to go to the list of worlds in the path of Neptune, you need to get to Jupiter in the early 2030s, while getting to the Kuiper Belt via Uranus requires a timeframe in the mid-2030s. Jupiter and Saturn line up just right for a slingshot to the Kuiper Belt in the late 2030s.

The target list creates tempting opportunities. Varuna, an oblong world elongated by a rapid rotation rate, is a perfect destination for a Jupiter-Uranus flyby. Neptune, as mentioned, brings an opportunity for Eris. A Jupiter-Saturn mission could visit Sedna, a far-flung dwarf planet with an orbit that may point the way toward an undiscovered tenth planet. Jupiter-Saturn could handle a pitstop to one of the most exciting dwarf planets: Haumea.

Like Varuna, Haumea is more egg- or oval-shaped than most large Kuiper Belt dwarf planets, which tend to be round. But Haumea likely got that way because of an ancient collision that gave it two moons, a ring system, and a trail of debris dragging behind. When asteroids all appear to have the same composition, they’re called a “collision family.” Haumea produced the only known collision family in the Kuiper Belt.

“Haumea is, hands down, the coolest one,” Zangari says. “Everyone wants to go to Haumea.”

Wherever we end up going, though, it may be limited time only. So if we want to see the rings of Haumea or even the red, alien hue of Sedna, the work needs to begin soon. Those worlds, those building blocks of our solar system, are so small that there’s really only one way to learn about them in depth: we need to actually go there.