A guide to the solar system’s biggest secrets

Jupiter, the planet killer, and three other untold stories from space. 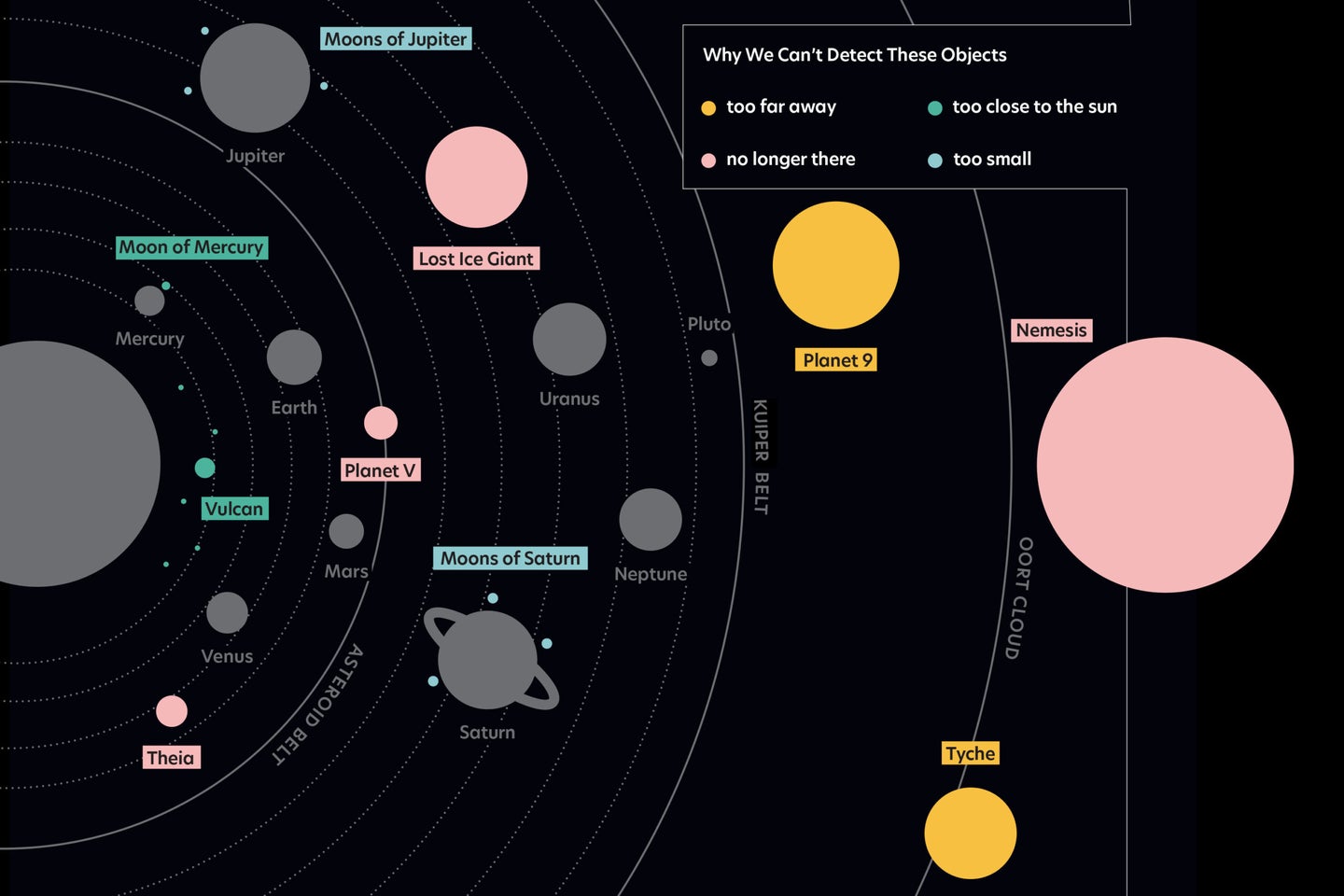 From the sun to Pluto and beyond, our solar system holds the ghosts of mysterious celestial bodies. Sara Chodosh
SHARE

Astronomers have spent centuries filling in their sketches of our corner of the Milky Way. But these charts, like all maps, are only approximations of reality. Their blind spots likely harbor some unknown entities—bodies too small, too close to the sun, or too far away for us to see. Here are some celestial objects that stargazers have suspected of dodging their telescopes over the years.

Astronomers once interpreted an oddity in Mercury’s orbit as a sign of a planet hiding in the sun’s rays. Einstein’s theory of gravity explained it away, but the zone could harbor asteroids (“vulcanoids”). They’d be small: NASA’s twin sun-observing STEREO spacecrafts would have spotted any wider than a few miles.

In digital reenactments of its early days, the solar system gets rowdy. Near collisions between planets end with Jupiter sending Uranus or Neptune flying in 99 simulations out of 100. Yet both remain. One explanation: A third body took the hit. Calculations hint that a massive, icy planet could have tussled with Jupiter and lost.

Hundreds of specks appear clustered beyond Neptune, a hint that something up to 10 times as massive as Earth might lie beyond. A large planet could supply the necessary gravitational influence to pull them in. New evidence for this celestial body—possibly a rogue world from interstellar space—was unveiled in 2016.

Semiregular extinctions on Earth suggest a dim companion star might have periodically careened by, showering us with meteorites dragged in its wake. But any such sibling is gone. A 2010 sky survey found thousands of new stars, some just six light-years away. Nemesis, which would lie at one-quarter that distance, was absent.

is a journalist covering developments in the physical sciences both on and off the planet. In addition to Popular Science, his work has appeared in Quanta Magazine, Scientific American, The Christian Science Monitor, and other publications. Previously, he taught physics and English in Mozambique and Japan, and studied physics at Brown University. You can view his website here.