From the Popular Science archives. 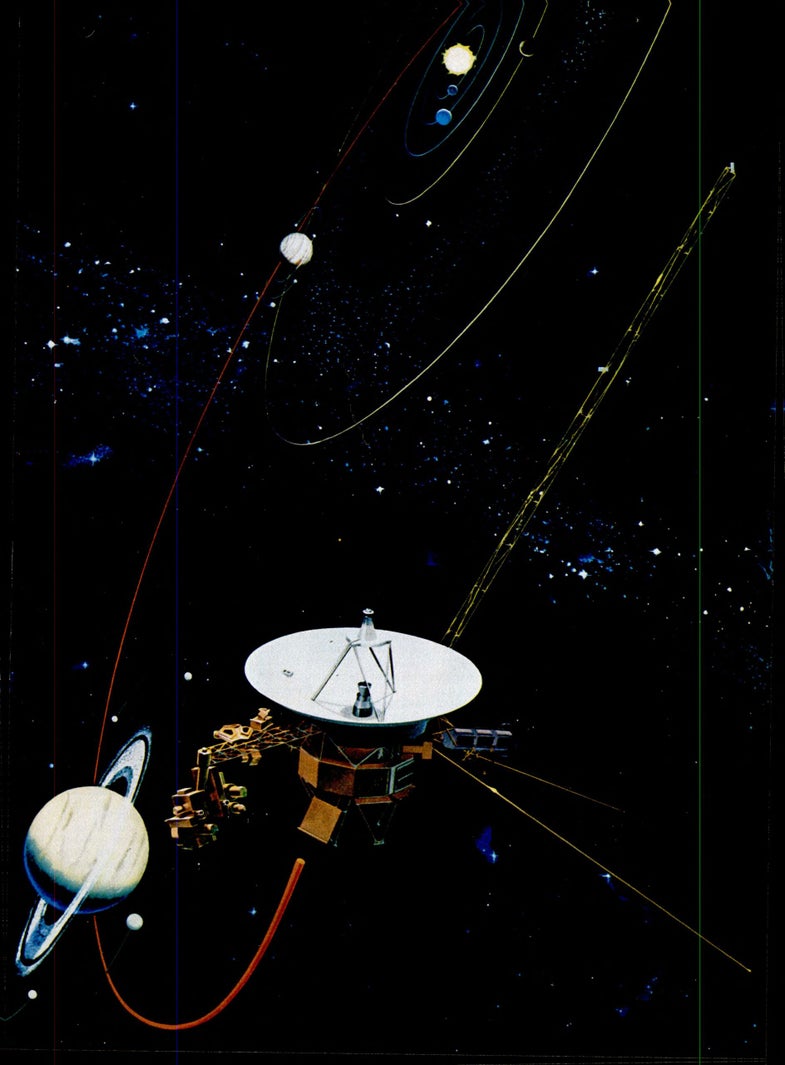 An artist's rendering of a Voyager spacecraft flying past Jupiter, Saturn, and their respective moons. Popular Science, August 1977
SHARE

On September 5, 1977, Voyager 1 launched and forever changed our understanding of the solar system. Voyager 2 launched two weeks before, on August 20. About a month before the two spacecraft left Earth, Popular Science went in-depth with the scientists behind the program to find out how it was planned, NASA’s goals for the spacecraft, and what would happen if something went wrong with Voyager 1 or 2. The article as originally written follows below: 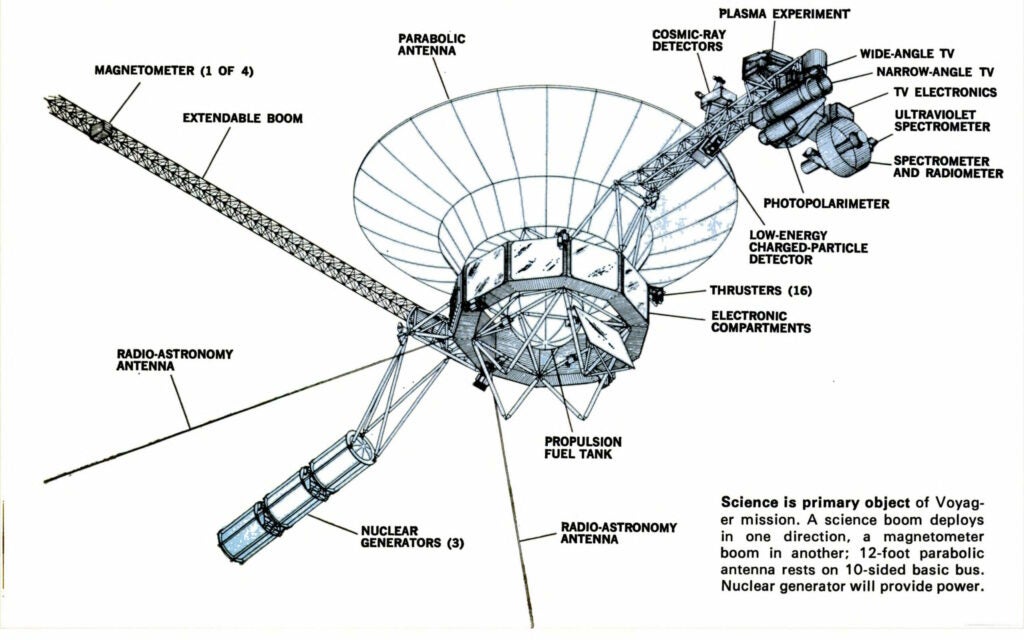 Voyager 1 and its components

Science is primary object of Voyager mission. A science boom deploys in one direction, a magnetometer boom in another; 12-foot parabolic antenna rests on 10-sided basic bus. Nuclear generator will provide power.

The longest space flight, a possible 12-year reconnaissance of the outer solar system, is about to begin. It’s called Voyager.

The name is appropriate. This voyage will take two spacecraft on a journey already being called a training period for interstellar missions. Before they leave our solar system behind, these Voyagers will have trained their eyes and ears on enough planets and moons to force astronomers to rewrite their texts.

Until a few months ago, Voyager was called Mariner Jupiter-Saturn. But Mariners are a different class of spacecraft, designed for flights to the inner planets. The name was changed.

Both Mariner and Voyager come from the design boards and fabrication facilities at the Jet Propulsion Laboratory in Pasadena, California. In late August and early September—the launches are scheduled 12 days apart—the Voyagers embark for regions where even the best earth-based telescopes provide only fuzzy clues as to what’s really out there.

James E. Long, a slender engineer and planetologist who had run (and finished) his first Boston Marathon just the week before, tapped the small Voyager model lightly. “I don’t consider this a two-planet mission,” he explained. “It’s really a 12-planet mission, even if we don’t go to Uranus.”

Long is science manager on the JPL-Voyager team. As he cheerfully admits, the option of sending Voyager on to Uranus and perhaps even Neptune became suddenly more attractive last spring—when Cornell astronomers discovered that Uranus, like Saturn, has rings (see box). (Ed. note, 2017: See image below)

Voyager, in fact, could become the long-awaited Grand Tour mission that was approved, then cancelled, in the early ‘70’s. The original Grand Tour would have been launched in 1977 on a trajectory including Jupiter, Saturn, Uranus, and Neptune, with options even for Pluto. That program died, but the idea survived.

“It didn’t take us too long to get excited about a two-planet Jupiter-Saturn mission as a consolation prize.” Long grinned. “Then the real detective work began, when we started looking at trajectories.

“We found hundreds that would get us to Jupiter and Saturn. We could have picked one in about 20 minutes, if that was our only concern.”

It wasn’t, and the trajectory analysis took more than two years. The key word for this twin mission to deep space is science, and throughout Voyager’s design and planning, scientific considerations came first.

“When we started planning, we realized the value of the Galilean moons,” Long said. “We finally found trajectories that give each spacecraft three of them.”

Those moons, the four largest circling Jupiter, are prime targets. One Voyager will make close approaches to Callisto, Ganymede, and Europa; the other will look at lo, Ganymede, and Callisto. Both spacecraft will get distant glances at a fifth moon, Amalthea, and will make close examinations of the gas giant Jupiter before being hurled on to Saturn.

“Those Galilean satellites may represent a small-scale version of what happened to the entire solar system.

“We expect those satellites to be quite different. lo seems to have no ice, but Europa and Ganymede probably do. Ganymede, in fact, may have an ice crust floating on liquid water. Finally, the ice on Callisto must be very dirty because it has such a low albedo (reflectance).”

The moons have another similarity with the solar system, James Long pointed out. Their densities decrease as their orbital distances increase.

“lo probably will look like Mars or our moon,” he said. “It should be heavily cratered. Ganymede and Callisto should look more like snowballs. But what is the geology of a snowball? How does a meteor impact look on a snowball?” 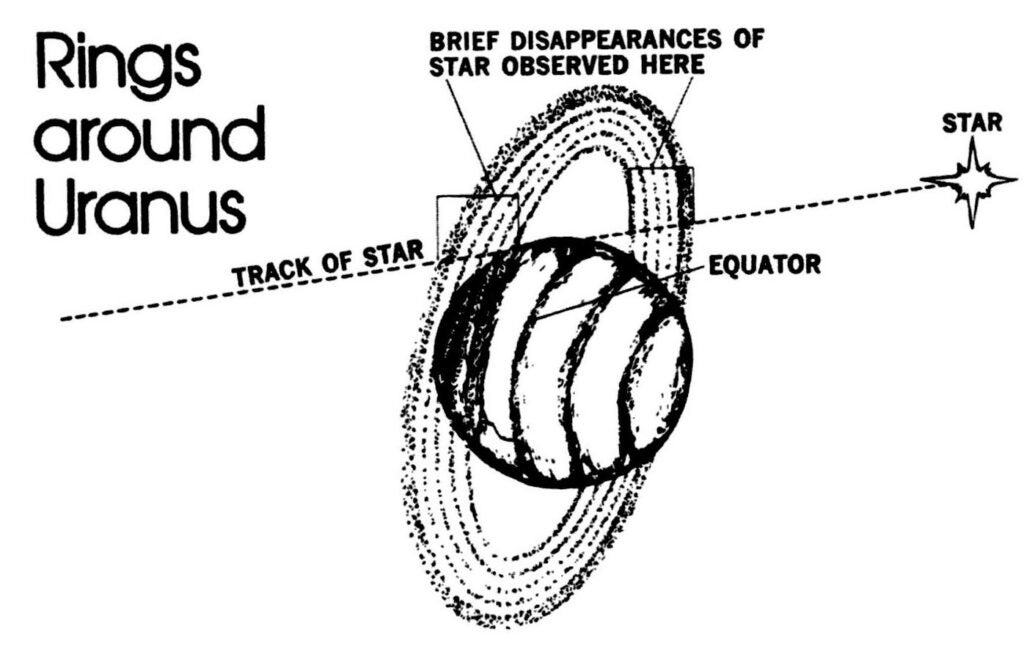 Their first thought was that their equipment had failed. Then they looked for a string of high-altitude clouds. But minutes later, in their specially equipped NASA airplane, flying at 41,000 feet over the ocean southwest of Australia, the astronomers knew they had discovered something. They just weren’t sure what. Within a week of that dark night last March they knew they had found a band of unsuspected rings around the planet Uranus, reported Cornell astronomer James Elliot. That was hardly what they were seeking. Instead, the Cornell team, in a joint project with NASA’s Ames Research Center, was planning to gather data on the Uranian atmosphere, when the planet crossed a moderately bright star. But in the minutes before occultation, Elliot got a jolt. The pens recording light intensity from the star on a paper strip chart suddenly zigged down to zero, then zagged back to normal.

Voyager’s cameras will tell us. Two video color cameras, one wide-angle and one narrow, will transmit high-resolution images of moons, planets, and perhaps even chunks of Saturnian or Uranian rings.

The difference between Voyager images and those sent back by two earlier Jupiter visitors should be striking. Pioneers 10 and 11, examining the planet in 1974 and 1975, had only rudimentary imaging systems. Jupiter’s Great Red Spot, for instance, could be seen entirely in just one frame. At peak Voyager resolution, it will require a 40-frame mosaic to analyze the Red Spot. Such increased detail is just one measure of the importance placed on scientific return from Voyager.

Both spacecraft will begin televising planetary targets months in advance of closest approach.

“At Jupiter, it’s going to be like watching an eight-month-long motion picture instead of seeing a few snapshots,” said science manager Long. “We’ll be able to watch the dynamics of the atmosphere, even studying individual storm cells. The same applies to Saturn, but you add the rings.”

Two pounds in a one-pound bag

Voyager’s beauty is its mission, not its machinery. The spacecraft itself appears unspectacular and utilitarian, both because of its efficient design and because we’ve seen similar ships bound for the planets.

Part of that packing, Casani explained, centered on the Voyager radio system.

“We pressed the state of the art on our amplifiers,” he said. “We’re getting 30- to 35-percent efficiency instead of the normal 20 percent.”

That improvement, combined with Voyager’s extra-large antenna and NASA’s present Deep Space Network (DSN), gives the mission a lifetime of potential. Scientists will be able to monitor Voyager’s chatter for the next 33 years and send it commands for a full century. Only when Voyager is in interstellar space, more than twice the distance of Pluto from the sun, will its whisper be lost.

The identical spacecraft carry 10 instruments each, including television. Combined with the radios, they permit 11 experiments. Among the devices:

What does it mean? Caltech’s Dr. Stone explained that the Voyagers will be looking for clues about the formation of the solar system. That kind of data ultimately leads to better knowledge about Earth; it can yield results as practical as new insights into weather patterns or the distribution of minerals.

For instance, when the Voyagers reach Saturn in 1980 and 1981, the moon Titan is a primary target. With a radius of about 1800 miles, it’s the largest moon in the solar system, larger even than the planet Mercury. And it has an atmosphere.

“We don’t know much about Titan’s atmosphere,” Stone said. “But everybody agrees that it’s substantially denser than Mars’. Estimates run from 10 to 50 percent of Earth’s atmosphere.” Voyager will analyze its composition, which may be among the best examples of what gases were most abundant when the solar system was formed, Stone said.

Other Saturnian moons—Enceladus, Tethys, Mimas, and Rhea—will also be probed by the video cameras and instruments. What will happen at Uranus hasn’t been determined yet.

“We haven’t designed that approach in depth yet,” JPL’s Long said. “There are a lot of bridges to cross before we do.”

Crossing them has already been eased by the ring discovery, which Cornell astronomer Carl Sagan calls “a tremendously provocative inducement to exercising the Uranus option.”

“It’s obvious that there is a whole host of undiscovered phenomena in the outer solar system,” Sagan said. “The only way we’ll find them is to go there.

“The outer solar system is where conditions are much closer to the way things were at the origin. There may be extremely interesting records there for us to read.”

But Sagan cautions against expecting too much from Voyager.

“There are a lot of claims that this or that mission will be the Rosetta Stone, unlocking the history of the solar system,” he said. “But it won’t happen that way.” 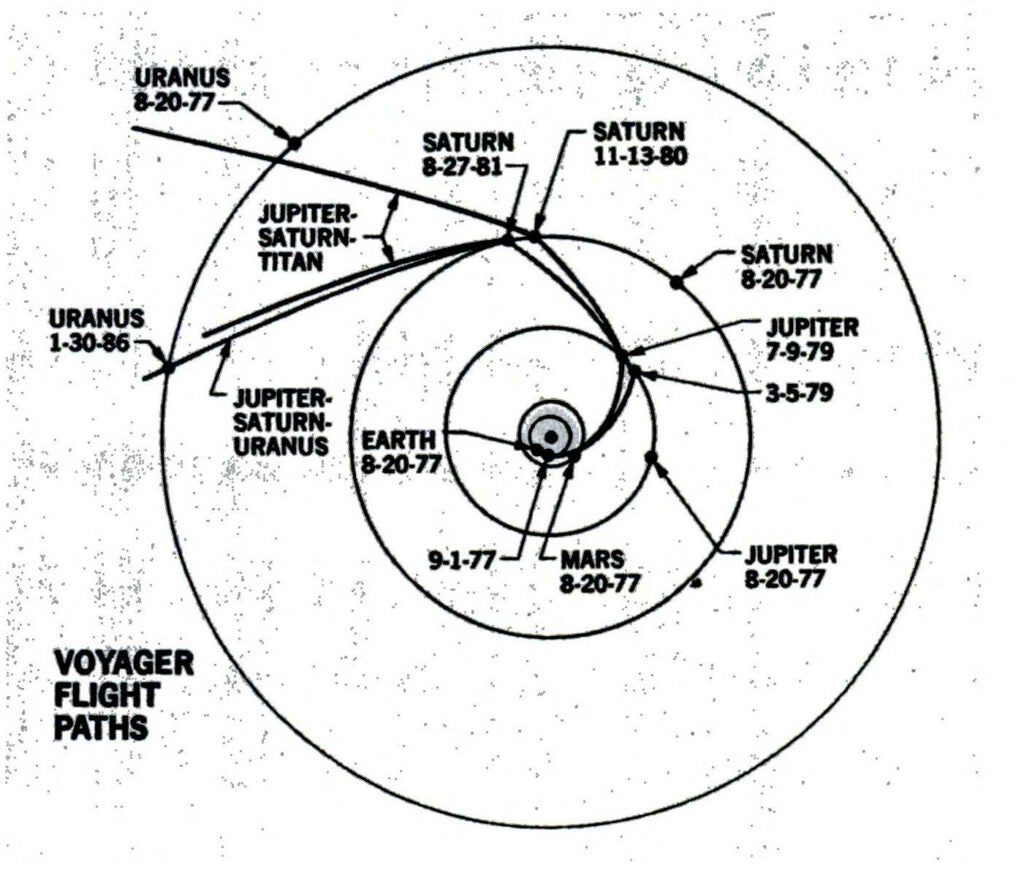 Two Voyagers, launched 12 days apart, will fly by Jupiter, Saturn, and some of their moons. Then one may head for Uranus—1.7 billion miles from earth. Sketch below shows itinerary.

Voyager will yield volumes of new data, however. Its trajectories include a number of opportunities for occultation— having the spacecraft pass behind a planet, moon, or ring. When that happens, some instruments will briefly be able to look through an atmosphere, providing a rare glimpse of what’s there. In other cases, scientists will be watching for sudden changes in radio transmissions. Those changes can be analyzed to give new data on planetary mass and shape.

At Saturn and Uranus, Voyager will pass behind the rings. Scattering of the radio signals will tell much about the size of the chunks in each ring.

“If the individual pieces of Saturn’s rings are as large as 500 meters [1640 feet], the imaging system will see them,” Stone said. “But most of the size data will come from radio occultation. Of course, we could all be surprised.”

Surprises have been the rule in planetology. The discovery of Uranian rings is just the latest. Pioneer 10, which will pass through Saturn’s rings in 1979, may provide some more. But the best data will come from the Voyager visits.

Because of trajectory differences, the second Voyager launched will reach both Jupiter and Saturn first. If it does its job well, including a pass within 2550 miles of Titan and an occultation by the rings, the trailing Voyager can be retargeted to use Saturn’s gravity as a boost toward Uranus. (The leading Voyager will continue toward the stars after leaving Saturn.)

But exercising the Uranian option means giving up a second close look at Titan and a second ring occultation. Even so, the initial planning all points toward Uranus: To avoid possible damage earlier in the mission, the Uranus candidate is targeted well away from Jupiter’s radiation dangers.

What will happen if one Voyager is lost, through a booster or spacecraft malfunction?

“I don’t know,” admitted Casani, “but there’ll be a lot of pressure on us to compromise the Saturn mission in order to visit Uranus.”

Mission planner Charles Kohlhase considered the possibilities. “If we’re going to give up anything at Saturn, we’d better be sure we’ve got a spacecraft healthy enough to give us Uranus.”

But even Uranus isn’t the end. That Voyager could go on to Neptune, reaching it in 1989. Then it, too, will head for the stars.

And somewhere out there, perhaps as it passes through some distant galaxy, Voyager 1 or 2 may provide one final surprise. For affixed to each Voyager is a metal master of a phonograph record. The record’s contents, selected by a team headed by Carl Sagan, includes classical music, natural and man-made sounds, and enough scientifically coded data to let some other civilization learn something about earth and earthlings.

Charles Kohlhase pondered the Voyager mission and its long-term implications: “To do everything, there are a lot of trade-offs,” he said. “But it’s really a training period for star travel.”