Did Uranus get smacked so hard it spun sideways?

The traumatic event may also have seeded the gas giant’s many moons. 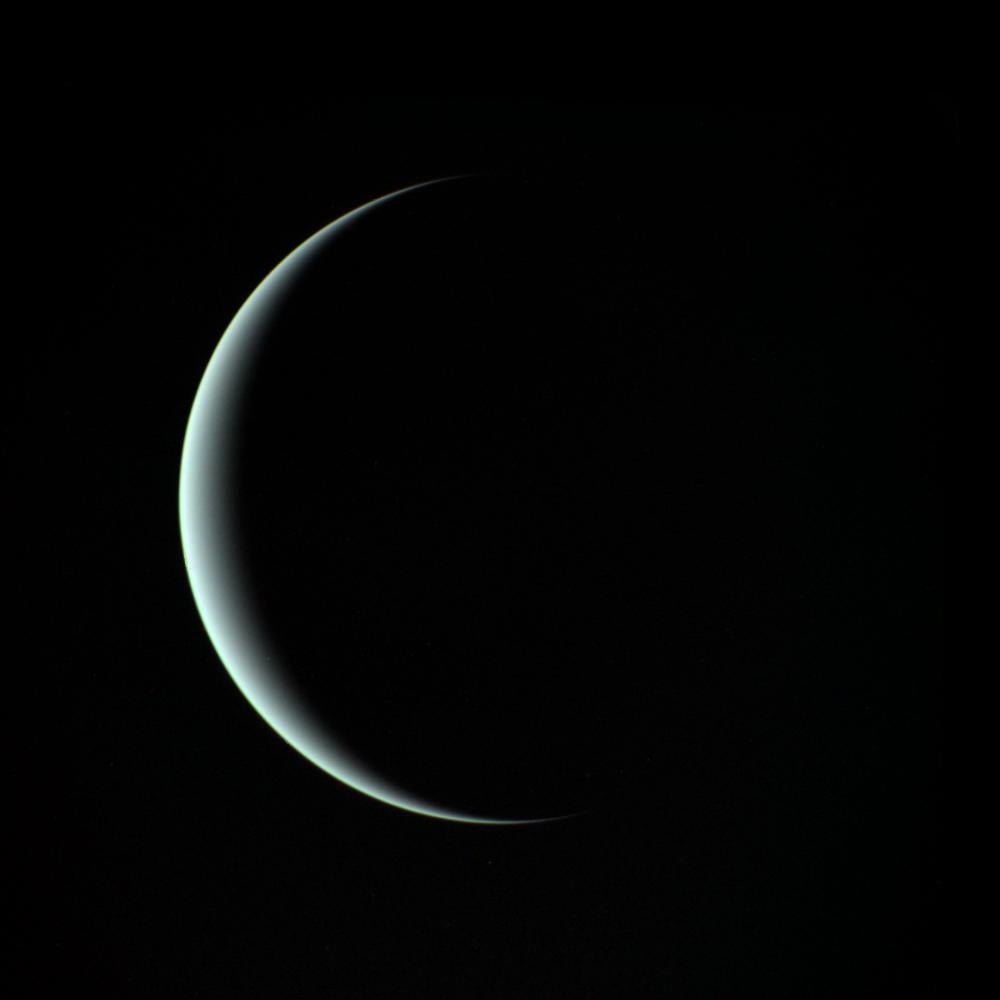 Uranus’s appears calm today, but it may still bear the scars of past trauma. NASA/JPL
SHARE

Like other giant planets, Uranus has a set of rings and more than a dozen moons that make it resemble a miniature solar system unto itself. But unlike its king-sized neighbors (and the rest of the planets for that matter) the ice giant system turns on its side, rolling rather than spinning. Now, a new simulation of the planet’s early years buttresses a theory developed to explain the weird orientation by showing that it can produce the planet’s moons too.

“This model is the first to explain the configuration of Uranus’s moon system,” said Ida Shigeru, a planetary scientist at the Tokyo Institute of Technology in Japan, in a press release.

The bizarre planet demands an origin story unusual enough to match its oddball nature. Earth, Jupiter, and most of our cosmic crew spin “vertically” like tops, their north poles all pointing out into the universe in the same direction as the north pole of the sun. But not Uranus. It alone rolls on its side, its rings and moons swinging “up” and “down” out of the solar system’s plane as they orbit.

So what tipped the Uranus system over? It could have tilted of its own accord from an initial twist in the dusty disk that spun it into being, but many planetary scientists assume that the young planet—when it was just a few hundred million years into its billions of years of life—suffered a cataclysmic collision. Back then, the early solar system swirled with more planets than the canonical eight(ish), so run-ins were unavoidable. A Mars-sized rock dubbed Theia may have liquidated much of the Earth to create the moon. Similarly, baby Uranus may have taken a crushing, off-center blow from a roaming ice ball perhaps a few times Earth’s size that knocked both bodies for a loop. When the dust settled, what was left of the two would have merged into a single rolling world.

Researchers first put the theory to the test in the early 1990s with a computer simulation. They broke up the proto-Uranus and its antagonist into thousands of digital pieces, each representing roughly a tenth the mass of Earth’s moon. By smashing the two particle-clouds together over and over at various speeds and angles, they concluded that the double Armageddon would have lasted just days, after which the resulting amalgamation did indeed acquire the characteristic roll.

Two years ago a team including Don Korycansky of the University of California, Santa Cruz, and Chris Fryer of Los Alamos National Laboratory pushed the idea even farther. Harnessing three decades of computing advances, they simulated a range of collisions between two planets each made up of millions of pieces. “It’s like going from a monitor with 200 [pixels] on a side to a 2000 by 2000 [pixel] image,” Korycansky says. “You can see lots of details that can be further investigated.” The planet-tipping theory withstood their high definition scrutiny.

Now research from Ida and his colleagues picks up where the previous simulations left off. “They take it to the next level,” Fryer says. “It’s getting quite exciting.”

Wrecking two worlds makes a mess, and the earlier models suggested that tons of debris would have ended up orbiting the freshly minted globe—but the planet-wide simulations weren’t sharp enough to nail down the shape the detritus would have taken. Ida’s results, which appeared last week in Nature Astronomy, tackle the problem by zooming in on the disk itself and breaking the system’s history into two distinct eras.

Starting from the mass of the disk predicted by past simulations, they first analyzed the immediate aftermath of the collision. Assuming the initial planets had been mostly ice balls, the impact’s violence would have vaporized some of their bulk. The team treated the debris as a cloud of water vapor mixed with hydrogen and helium gas, and analyzed how the disk cooled and thinned as it orbited and fell onto the planet. They found that after thousands of years, it eventually condensed into ice particles, which in turn clumped into miles-long ice chunks—the seeds of Uranus’s future moons.

When the wreckage transitioned from a cloud to a chunky collection of objects, Ida’s team switched tactics. They set up a digital Uranus with a swarm of 10,000 icy moonlets (with properties fixed by the results of their first simulation) and let them fly. When the inevitable game of bumper cars settled down, about a dozen large survivors remained. Their assorted sizes and locations matched those of Uranus’s observed moons. The largest four were a particularly close fit to reality.

The result resolves a number of challenges in other models, according to Ida, making more complicated theories unnecessary. “Our study shows that the simple impact scenario beautifully reproduces the Uranus satellite system if the disk evolution is properly taken into account,” he says.

Other impact researchers say that the work doesn’t substantially change their understanding of how the system formed, but that it does give the theory twice the explanatory power it had before. “Not only does the collision model easily explain the tilt,” Fryer says, “but it also answers the question, ‘how did Uranus form its satellites?’”

Earlier studies remained relatively agnostic about what the incoming planet might have been made of—rock or ice. But only ice appears sticky enough to glom together into moonlets properly, according to the new work, so future models may be able to focus on fleshing out the icier scenarios. Ida says that precisely accounting for the relative amounts of ice and rock in the system’s moons is a major direction for future research.

But the planetary science community can learn only so much by looking backwards. Building computer programs that generate “right answers” matching Uranus’s real moons is a great step forward, researchers say, but the real smoking gun would be a genuine prediction of a currently unknown feature. Fryer, for instance, is currently developing new simulations that forecast what substances might have been forged in the heat of the collision (as opposed to less dramatic formation scenarios, in which the planet would have stayed cooler). To confirm such a theory, a future spacecraft would have to go out and check exactly what Uranus is made of.

Fryer hopes that theoretical studies like his and Ida’s will turn up a variety of potential signs that only an impact could have produced. And since any mission to the outer planets will take decades to plan and execute, they’ll have plenty of time to calculate.