Saturn's moon is shockingly Earth-like, so NASA is sending a drone. 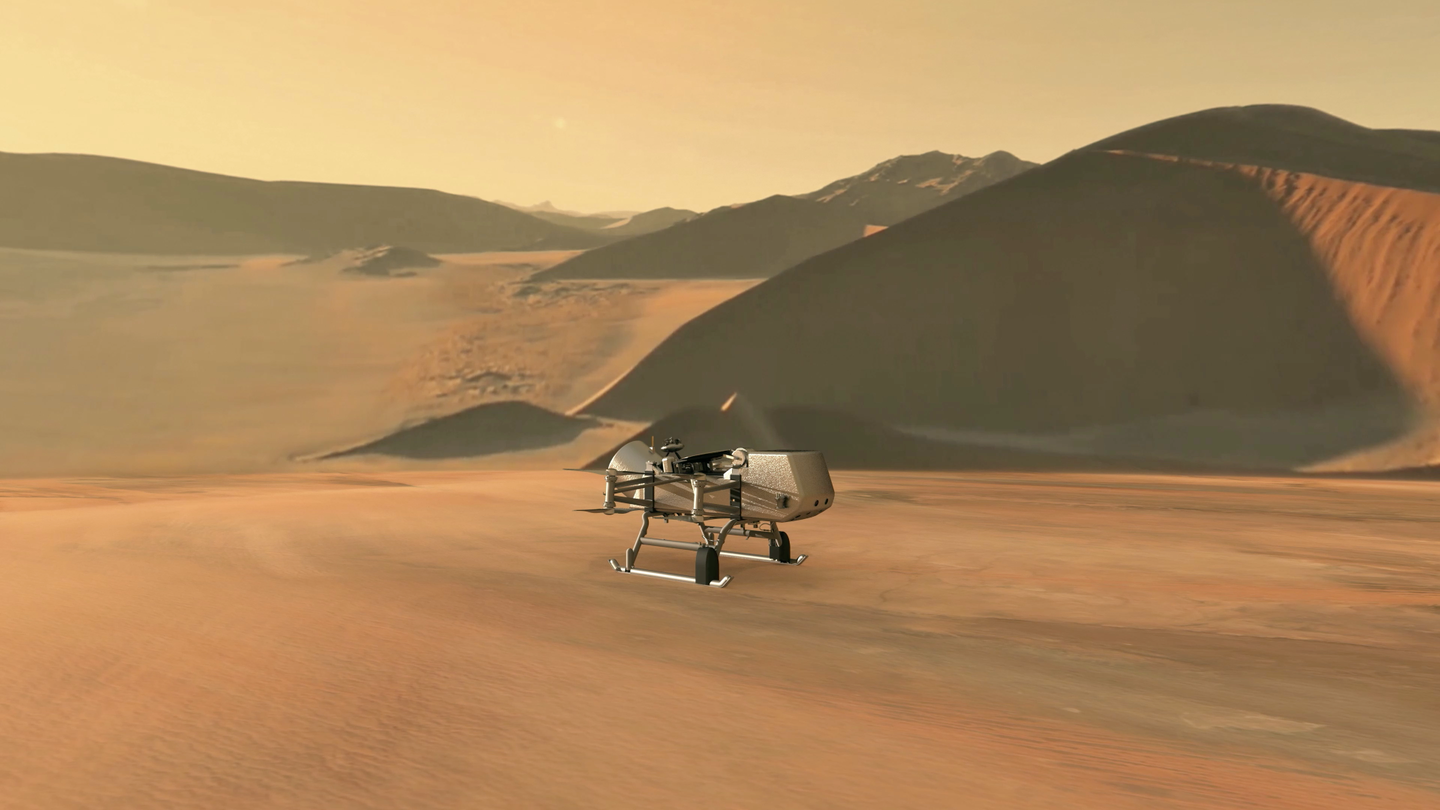 The next few decades could bring a cascade of discoveries on extraterrestrial life. NASA announced on Thursday its decision to green-light Dragonfly, a octocopter drone designed to sniff out signs of life-giving chemistry on Saturn’s largest moon, Titan. Combined with the Europa Clipper mission, which should start orbiting Jupiter’s moon several years before Dragonfly touches down, the space agency is giving us our best shot by far at finding alien organisms.

If life exists in our solar system outside of Earth, it’s probably on a wet moon such as these two. But while Europa tempts us with a subsurface ocean—perhaps not so different from our deepest Antarctic reservoirs, which we know harbor microbial life—it’s an icy world with a habitat quite unlike our own. Titan, with the thickest atmosphere of any moon studied, is one of the most Earth-like bodies we know of.

“Titan has all the ingredients needed for life,” Lori Glaze, Director of NASA’s Science Mission Directorate’s Planetary Science Division, said during a press conference on Thursday. “We have the opportunity to examine the conditions that existed on early Earth when life formed” or even conditions, she said, “that harbor life today.”

The world isn’t a perfect analog for our own, but that makes it all the more exciting to study. What makes Titan both familiar and alien is its methane: at -290°F and under the pressure of an atmosphere thicker than Earth’s, what we experience as a gas exists as a flowing liquid. This liquid methane actually condenses in the atmosphere to form clouds, which make rain. It’s just like our planet’s water cycle, except without liquid water. The resulting storms have carved out lakes and rivers and valleys on the surface, creating a terrain that scientists believe will look very familiar.

Titan also has organic molecules, which are crucial to the evolution of life as we know it.

“There are chemical reactions going on [in the atmosphere] that actually cause very complex organic molecules to form, and they drift down,” Curt Niebur, NASA’s lead program scientist for New Frontiers, said in a press conference. “It’s almost like a light snow that’s always forming. And it’s that kind of complicated organic synthesis that really drives our interest.”

Dragonfly—which won’t look like a little backyard drone, but more like a flying Mars rover—will spend 2.7 years making a couple dozen short flights around Titan. Its ultimate goal is to make a total journey of around 108 miles, which is farther than all previous Mars rovers combined. It’s worth the trek: Dragonfly is gunning for the Selk impact crater, where scientists believe all three crucial ingredients for life may once have met. There’s evidence it once held liquid water, plus the organic molecules and energy (in the form of sunlight) found elsewhere on the surface.

Even if we don’t find signs of previously existing life there, the crater gives us a unique opportunity to peek at the chemical conditions of Earth back when biology got its start. “The great thing about Titan is that it’s very similar chemically to Earth before life evolved,” Niebur said. “We can’t go back in time on Earth and learn lessons about the chemistry that eventually led to life, but we can go to Titan and pursue those questions.”

Niebur is especially excited for humankind to see images of Dragonfly’s flight. The European Space Agency’s Huygens probe, which touched down on Titan in 2005 after hitching a ride with Cassini, sent beautiful pictures home. In fact, Huygens and Cassini provided data that will guide Dragonfly’s mission plan, and the drone will make its first descent not far from the spot we’ve already seen. But Dragonfly will ultimately provide a much better view. “We will get the experience as if we were riding along with Dragonfly, staring down at this very alien yet familiar surface that has these rivers and mountains, and I think that’s going to be just a tremendous experience for the public,” Niebur said. “I think it’ll look a lot like when you’re flying above Earth in an airplane.”

There’s also hope that Titan’s suspected subsurface ocean might come up high enough to interact with its other life-giving ingredients, which would open up the possibility for some kind of life below the towering sand dunes and methane rivers.

“We’re absolutely thrilled,” said the mission’s Principal Investigator Elizabeth “Zibi” Turtle, who is based at Johns Hopkins University’s Applied Physics Laboratory in Laurel, Maryland. “The team has been working so hard over the past few years pulling together all the different aspects of this mission, and this has so much potential for science.”

Dragonfly is set to launch in 2024 and arrive at Titan in 2036, so our dreams of playing in an early-Earth sandbox will have to wait a while longer. But when we do get to Titan, whatever we learn is going to give us game changing insight on the origin of life as we know it.