It could be something even cooler. 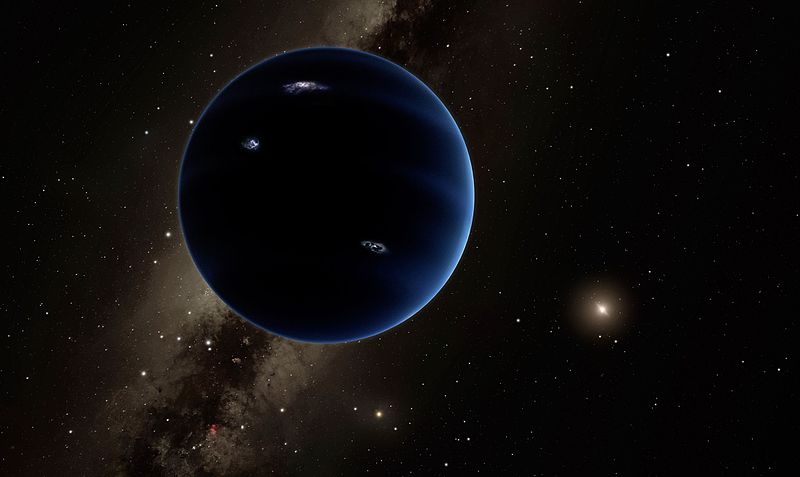 Planet Nine could exist without actually being a planet. NASA/JPL-Caltech/Robert Hurt
SHARE

There’s something bizarre lurking around the outskirts of the solar system. It’s 10 times more massive than Earth, about 10 to 20 times farther away than Pluto, and powerful enough to gravitationally affect other objects residing in the area. Scientists continue to stumble upon evidence of the existence of this supposed Planet Nine. But how can something so gargantuan just remain hidden from our eyes for so long?

Perhaps, according to new findings published in Astronomical Journal on Sunday, we need to stop thinking about Planet Nine as, well, a planet—and instead consider that it might actually just be a bunch of smaller objects, working in concert to exert the sort of gravitational forces one would expect from a large, single body.

“I like the paper,” says Caltech astronomer Mike Brown, who was not involved with the study but has worked very extensively over the last several years to characterize and find Planet Nine. “It’s the first time someone has proposed something other than Planet Nine that actually explains the phenomena that we are seeing. I don’t think the explanation is actually correct, but it looks to me like the physics actually works to actually explain what we see.”

The Kuiper Belt (the orbital region of the universe beyond Neptune) is covered in small bodies of ice and rock originating from the early days of the solar system. Many of these “trans-Neptunian Objects,” or TNOs, move in very unusual orbits around the sun. Some of this can be explained by the influence of larger celestial bodies like Neptune. But some of these orbits need another explanation—some other unseen object capable of disrupting gravity.

Planet Nine could be the hidden “shepherd” of these TNOs, guiding their movements and spatial orientations. But Jihad Touma, a researcher from the American University of Beirut and a coauthor of the new study, explains that there are a few shortcomings to the hypothesis that a ninth planet is at play—namely that it doesn’t account for the gravitational pull of other planets in the solar system, and that some of the TNO orbits in question are a bit too eccentric to be influenced by a single object. In addition, we’re still totally stumped on where a giant planet like this came from and how it ended up in such a remote region of the solar system.

Ultimately, Touma and his graduate student, Antranik Sefilian were inclined to wonder, what if the mass of Planet Nine was spread out into a disk? “It seemed like the sound thing to do,” he says. As a result, the pair came up with what’s basically a disk of thousands of icy TNOs on the scale of less than 100 kilometers in diameter (including a small fraction of dwarf planets like Sedna), all lying in the same orbital plane as the true planets of the solar system.

The new model doesn’t outright preclude the existence of an extra planet working together with this proposed disk; it simply rules out the possibility that that planet would be as gargantuan as what’s currently predicted. Touma, in fact, says this is “ultimately our preferred scenario.”

“It is not a question of believing or not in Planet Nine,” says Touma. “It is more a question of what one can reasonably expect as a byproduct of the formation of the solar system, all the while allowing for observational constraints, and whether what can be reasonably expected explains the observed clustering of orbits of TNOs naturally—without appealing to an additional planet.”

Although Brown thinks the new paper does a good job of accounting for the sort of gravitational peculiarities astronomers continue to observe, he thinks there’s basically no chance Planet Nine can be anything but a massive planet. “It appears to me completely implausible,” he says. He finds it nearly impossible that a disk of cosmic matter that’s at least 10 Earth masses could have stayed intact around the sun for about 4 billion years on end. “I’d say that Occam’s razor would greatly prefer the simple solution of a single planet out there than a special arrangement of a ring of object. Interestingly, a ring of objects would be much much easier to find than a singular planet, yet there is no evidence that such a thing exists.”

Konstantin Batygin, another Caltech astronomer who’s worked alongside Brown to find Planet Nine, also points out a few other astrophysical drawbacks to Touma’s and Sefilian’s model—namely that there is not enough mass in the distant Kuiper Belt to explain the formation of such a disk, and that the model requires that disk to exist way beyond a reasonable distance from the sun.

Why has it been so difficult so far to find Planet Nine, or whatever it might actually be? “Planet Nine is so faint that in order to even hope to detect it, everything has to go right,” explains Batygin. The atmosphere can’t be turbulent, humidity and wind must be essentially nonexistent, the moon can’t be creating observational disturbances—and those are just the variables close to home.

“I wish there were an easy way to shortcut the long search, but we have to be in this for the long term, I think,” says Brown.

The upshot, according to Batygin, is that if nobody finds Planet Nine by 2023, it will almost certainly be detected by the Large Synoptic Survey Telescope, a next-generation telescope currently under construction in Chile.

If those observations find bupkis—or find an object that’s smaller than expected—you can be sure the astronomy community will go back to the drawing board with Touma and Sefilian’s paper in hand.