We’ve gained new insight into how the object came to be. 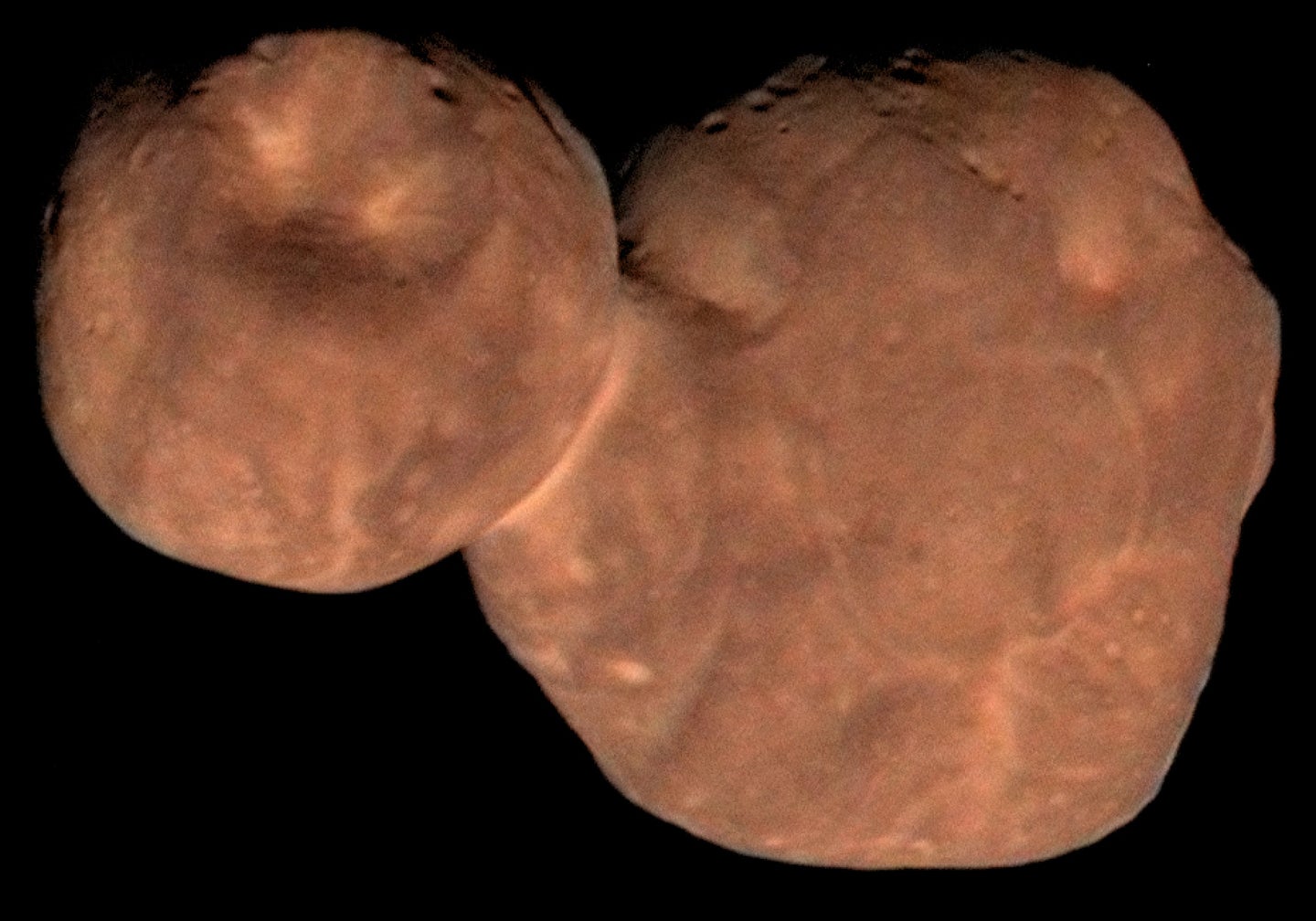 Even as the New Horizons team celebrated their spacecraft’s historic flyby of Pluto in the summer of 2015, they anguished over where to turn the probe next. After years of scouring the outer reaches of the solar system in vain with ground-based telescopes, the orbit-based Hubble’s keen eye finally helped them spot two potential targets. One looked invitingly bright, but a visit would have burnt every remaining drop of fuel in the spacecraft. The team decided to stay flexible and roll the dice on the dimmer speck. In October of 2015 New Horizons fired its engines and headed toward the mystery dot, now officially known as Arrokoth, with no idea what they might find.

Now, five years later, their gamble appears to have paid off. Not only did New Horizons achieve a next-to flawless flyby of Arrokoth, the most distant object ever visited, but buried in its gigabytes of data—which have been trickling back to Earth ever since the New Year’s Day 2019 rendezvous—lies empirical evidence that strikes against a classic theory of how planets form. The New Horizons team published their latest analysis of the ancient body and how it came to be in a trio of papers appearing in Science last week.

“[The Arrokoth encounter] was beyond our wildest dreams,” says William McKinnon, a planetary scientist at Washington University in St. Louis who has been involved in the New Horizons project for more than 30 years. “It was much more interesting than we had ever really considered.”

Like most planetary science graduate students in the late 1970s, McKinnon once learned that the solar system got its current form through an increasingly high-stakes game of planetary billiards. After the sun’s birth, a disk of dust and gas spun around the infant star. Colliding grains formed pebbles, and pebbles merged into something like asteroids. Eventually the solar system saw up to hundred-mile wide “planetesimals” smashing together, growing in leaps and bounds until Jupiter, Earth, and the rest of the family was complete.

But this theory of planetary growth started to fall apart in the 21st century. The bigger planetesimals get, the harder and faster they slam into each other, and after a point they tend to blow each other to smithereens rather than smoothly merge. “In the last 20 years, there’s been the development of a whole new and powerful theory that involves particles in the solar [dust cloud],” McKinnon says.

The new idea goes something like this. A group of dust grains plow through the young solar system’s gas a bit faster than lone wolf particles, drafting off each other like cyclists in the Tour de France. As the grains get faster, they overtake particles orbiting ahead of them, and the entourage swells. Eventually gravity pulls the group together in one fell swoop. “You get your planetesimal all at once,” McKinnon says. Finally, nearby pebbles rain down onto the planetesimal until it evolves into a full-fledged planet.

This new theory helps explain mysteries like how the heck Jupiter could have gotten so big so fast, but the passage of astronomical time has erased most firsthand proof. Planets weather. Asteroids knock into each other. Comets melt as they swing by the sun. To really test the idea, you’d need to find the last refuge of the solar system’s pristine planetesimals.

Enter New Horizons. After passing Neptune’s orbital ring, the spacecraft entered the Kuiper Belt. This zone of frozen objects is similar to the asteroid belt, but it’s larger and too sparsely populated for its inhabitants to be constantly bumping into each other. Objects out there, 30 to 50 times farther from the sun than Earth sits, have persisted relatively unchanged for billions of years.

Arrokoth represents one such fossilized planetesimal. Its body spans about 12 miles in length, and features two similar sized lobes partially merged together, like a snowman missing its head. It’s fluffy like snow too, McKinnon says.

And its fragile construction shows no signs of traumatic collisions. After months spent reconstructing the object out of photographs from a variety of angles, the New Horizons team has concluded that its shape suggests a peaceful formation. When a racing cloud of grains and pebbles collapses, it often forms two lumps, models suggest. Those lumps then orbit each other until something, perhaps drag from the surrounding gas, forces them together.

After simulating a wide range of speeds and angles of collision, the team found that no merger happening faster than a tranquil 9 miles per hour (a third the speed limit in a school zone) could have produced an Arrokoth-shaped snowman. And McKinnon suspects it happened even slower, perhaps at just 2 miles per hour. “You can walk into a wall at that speed,” he says. “I don’t recommend it though.” Regardless of exactly how slowly Arrokoth’s lobes came to rest against each other, he views the New Horizons data as another nail in the coffin of the classic theory of violently colliding planetesimals.

Other researchers, however, say it’s too soon to universally abandon the fast crashing story, since different paths to planethood could work in different places. Jonathan Lunine, a planetary scientist at Cornell University, suggests that while conditions in the Kuiper Belt could have been right for slow planetesimal formation, bodies born in gas-free regions near giant planets may have grown similarly to the old textbook way. “While I like the model the authors present for Arrokoth,” he says, “the jury is still out on how relevant it might have been in other environments in the forming solar system.”

Advancing the debate will likely fall to the theorists. New Horizons still has a bit of fuel sloshing in its tanks and could theoretically fly past a third world, but the Kuiper Belt is a dark, empty domain. Nevertheless, the New Horizons team will search the sky once more this summer in hopes of a second miracle. “It’s a bit of a Hail Mary,” McKinnon says.