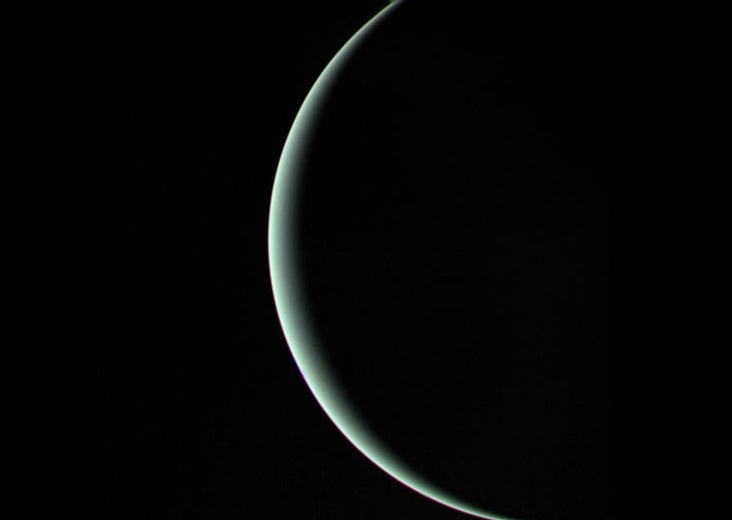 When subjected to the pressures (and temperatures) of life on other planets, even familiar substances can get pretty alien. Case in point: the diamond rains of the ice giants. Scientists have long thought that massive planets like Neptune and Uranus—which contain relatively tiny rocky cores covered with a mantle of slurried water, ammonia, and methane ices and surrounded by a thick atmosphere—are subject to rain made of literal diamonds. Now researchers have synthesized the process in a lab, showing how such conditions might occur.

“Previously, researchers could only assume that the diamonds had formed,” Dominik Kraus, scientist at Helmholtz Zentrum Dresden-Rossendorf and lead author of a study on the results, said in a statement. “When I saw the results of this latest experiment, it was one of the best moments of my scientific career.”

Despite their name, ice giants are actually hot as heck. Sure, temperatures in the upper atmosphere hover hundreds of degrees Fahrenheit below zero, thanks to the planets’ distance from the sun. But as you approach the core, the immense pressure crushing the interior heats things up thousands of degrees. These balmy temps and crushing pressures could theoretically prime hydrogen and carbon to form diamond rain some 5,000 miles below the outer surface of the atmosphere.

To replicate the process, scientists had to make some (very) hot and (very) heavy conditions. They used an intense laser to send a pair of overlapping shockwaves through polystryene—a plastic, made from hydrogen and carbon, that can simulate the behavior of methane compounds. The shockwaves created a brief moment of pressure and heat comparable to everyday life in an ice giant’s interior.

“The experimental time is very short,” Kraus told The Guardian. “That we saw this very clear signature of diamonds was actually very, very surprising.”

In fact, it took 50 femtosecond-long pulses from the most powerful X-ray source on the planet—the Linac Coherent Light Source (LCLS), an X-ray free-electron laser at SLAC—to capture the moment when the plastic’s carbon atoms broke away and joined forces to form diamonds a few nanometers wide. (A nanometer, for reference, is one billionth of a meter, and a femtosecond is one quadrillionth of a second.)

Although this lab experiment produced teeny tiny gems, the researchers believe that the more stable conditions on Neptune and Uranus likely make bigger rocks. The diamonds may spend thousands of years growing to weigh millions of carats, slowly sinking toward the core, through the atmosphere and the mantle, as heavy rain that puts our own downpours to shame. Too bad no one is there to cut and polish them.

In fact, ice giants’ gaseous and slushy outer layers are so thick that our even best probes haven’t really been able to suss out what goes on deep inside. Experiments like this one, while not as conclusive as observations made on the planets themselves, help scientists understand the inner workings of those mysterious worlds.