It happened back in 1986—but it could happen again. 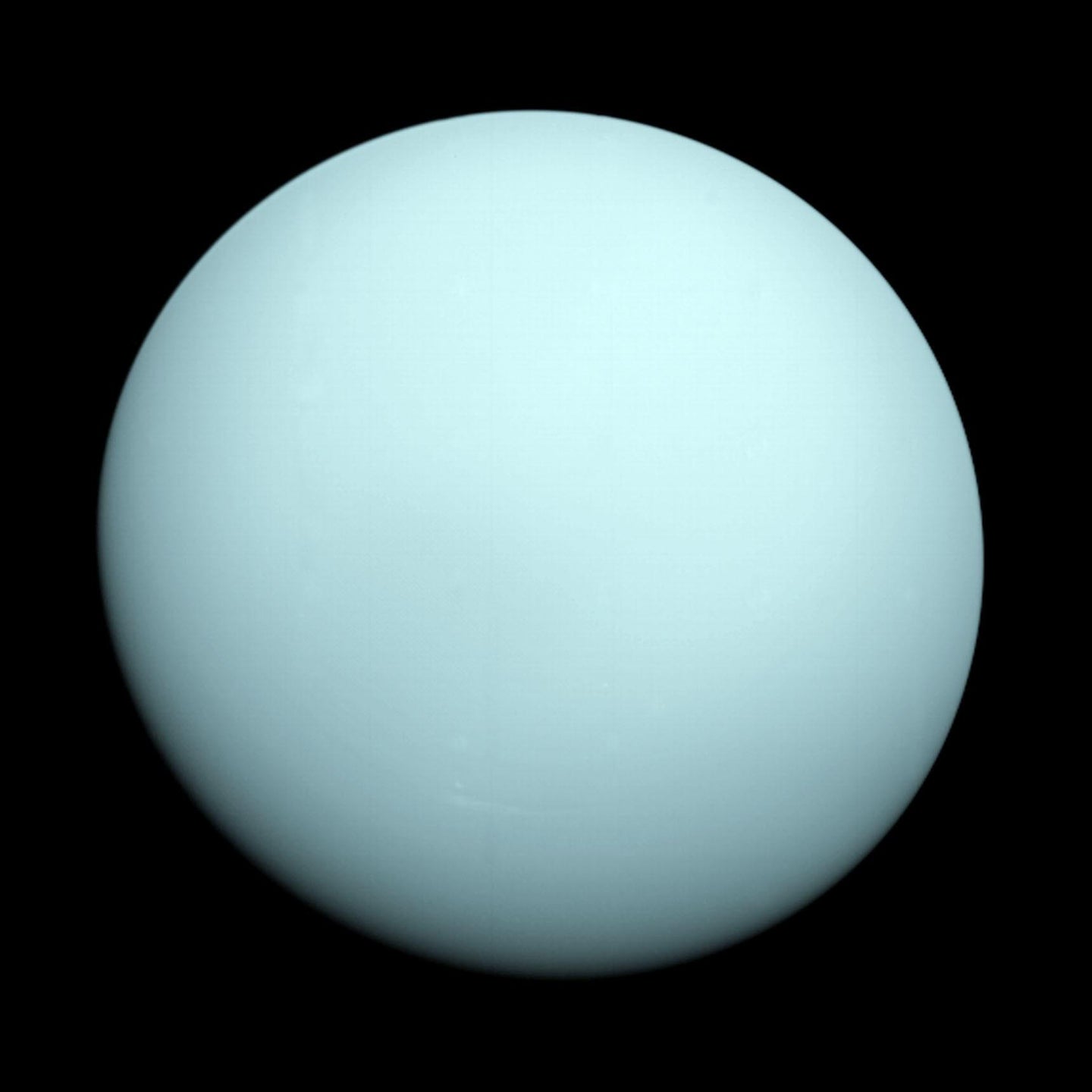 Voyager 2’s iconic portrait of Uranus hides many details of a complex world, some of which are starting to come to light. NASA/JPL
SHARE

There’s a giant blank spot in researchers’ ever-growing map of the solar system. Over the last two decades, a veritable fleet of probes has measured quakes on Mars, scrutinized the grooves in Saturn’s rings, observed jet streams on Jupiter, and heard the heartbeat of Pluto. But in terms of up-close-and-personal exploration, our image of Uranus hasn’t advanced substantially beyond the featureless blue beachball captured by Voyager 2’s vintage instruments in 1986.

But last year, while combing through NASA’s archives, two planetary scientists noticed something earlier analyses had overlooked—a blip in Uranus’s magnetic field as the spacecraft cruised through a magnetic bubble of sorts. The new result, which appeared last summer in Geophysical Research Letters, comes as planetary scientists start to shift their focus to some of the field’s deepest outstanding mysteries.

“The Cassini mission [to Saturn] is over and people are starting to say, ‘ok what else can we do,’” says Heidi Hammel, a planetary astronomer and the Vice President for Science at the Association of Universities for Research in Astronomy. “People are turning their sights back to these other planets and brushing off the old data.”

Gina DiBraccio and Daniel Gershman of the NASA Goddard Space Flight Center are two such researchers. Motivated by the community’s growing interest in the outermost planets, they spent hours manually processing the thirty-year-old data in a new way. Voyager scientists calculated the strength of the magnetic field as a whole, DiBraccio says, so short variations in the magnometer reading were simply considered a nuisance. But while zooming in on those jagged hops and dips, DiBraccio and Gershman spotted a special 60-second long section of Voyager 2’s 45-hour flyby where the field rose and fell in an instantly recognizable way. “Do you think that could be… a plasmoid?” Gershman asked DiBraccio, according to a NASA press release.

Plasmoids are charged globs of atmosphere blown out into space when the solar wind whips around planets. Losing such blobs can dramatically transform a world over a long period of time, and studying them can provide insight into how planets live and die. Researchers have spotted them pinching off from various planets, but the magnetic belch Voyager 2 sailed through was a first for Uranus. “We expected that Uranus would likely have plasmoids; however, we didn’t know exactly what they would look like,” DiBraccio says.

Now that they’ve caught one red handed, she says it looks quite similar to those seen leaking from Saturn or Jupiter but stealing away relatively more mass. (This plasmoid formed a cylinder roughly 22,000 times larger than Earth).

More such discoveries could remain in the archives, awaiting novel analyses. “Most of the Voyager 2 data are available on NASA’s Planetary Data System,” DiBraccio says, “and there is likely much to still be learned.”

Uranus in particular keeps on begging for further investigation. In 2014 Erich Karkoschka, an astronomer at the University of Arizona, revisited Voyager 2’s images with modern processing techniques. By blending 1600 images and sharpening the contrast, Karkoschka’s work revealed that a gumball world painted with candy-stripe clouds had been hiding within the bland blue ball all along.

On top of its unappreciated complexity, it’s also the odd planet out. Where others spin, Uranus rolls, tipped on its side with its poles pointing generally toward or away from the sun. Its magnetic field is bonkers too, offset from the planet’s center and tipped at a wild 60 degrees to the side. Planetary astronomers are blind to that magnetic field from Earth, although the Hubble Space Telescope can occasionally catch an indirect glimpse via Uranus’s auroras—which can shine far from the poles.

The Voyager team initially assumed the magnetic wackiness was linked to the Uranus’s belly flop position, but when the spacecraft flew by Neptune (which stands up straight) three years later it saw the same apparent mismatch between the planet and its field. Now researchers assume that something about the worlds’ inner workings must set their magnetic fields apart. “Boy would we like to be able to refine that theory,” Hammel says.

The next generation of planetary scientists might get to do just that, as interest in sending a dedicated probe to Uranus or Neptune is growing. Rough sketches of possible missions were published in 2018 and early last week. And DiBraccio says more such proposals are on the way. The general dream is to send a Cassini-style orbiter that will circle one of the planets for years, surveying its magnetic field and studying its heat flow. The spacecraft would also carry at least one smaller probe to fire into the atmosphere. There, it could measure otherwise invisible gases leftover from the planet’s formation.

And if the orbiter targets Neptune, it can schedule trysts with the enigmatic moon Triton (not to be confused with Saturn’s Titan). Likely an ex-dwarf planet Neptune plucked from the largely inaccessible realm ruled by Pluto and other frozen bodies, Triton may harbor an underground ocean.

Understanding the outer reaches of our solar system has never felt so urgent. NASA tends to plan its planetary priorities decade by decade, and they’re currently picking targets for the late 2020s and early 2030s. Meanwhile, between the last so-called “decadal survey” and the current one, exoplanet science has exploded, and Neptune and Uranus have become more than just local oddities.

Researchers now know that similar “Sub-Neptune” worlds are the most common type of planet in the galaxy. And many of these worlds are likely “ice giant” planets akin to our big blue duo. Unlike the gas giants, which are mostly hydrogen and helium, these planets are largely made from heavier molecules such as water and ammonia. If researchers want to understand what makes these worlds so common in alien systems—and why our solar system is such an oddball—they’ll have to figure out everything they can about Uranus and Neptune.

But our cosmic backyard is vast, and getting out toward the fence will take time and extensive planning. The sun shines too dimly out there for solar panels, so nuclear power is the only option for a years-long mission. And billions of miles is just really far away. “Even with our current best rockets and gravity assists, it’s still a decade to get out there,” Hammel says. Between technology development and mission design, she hopes to see a probe launch even if she doesn’t get to work on the data it will someday send back to Earth. “Most of us tend to think in multidecade time scales,” she says.

Proof of Uranus’s plasmoids sat buried in Voyager 2’s data for thirty years before DiBraccio and Gershman happened upon it. The next ice giant encounter might not take place for twenty years, and any researchers that may someday glean additional insights from its legacy data likely haven’t even been born yet. Imagining what sorts of discoveries might lie ahead gives astronomers like Hammel a uniquely long-term perspective. “I dream about exploring Uranus and Neptune and I dream about fantastic space telescopes,” Hammel says, “That’s how we get through tough times. We dream about the future.”