The Nintendo Switch OLED’s bright, beautiful screen will make you want to hold it close and stare at it instead of your TV. 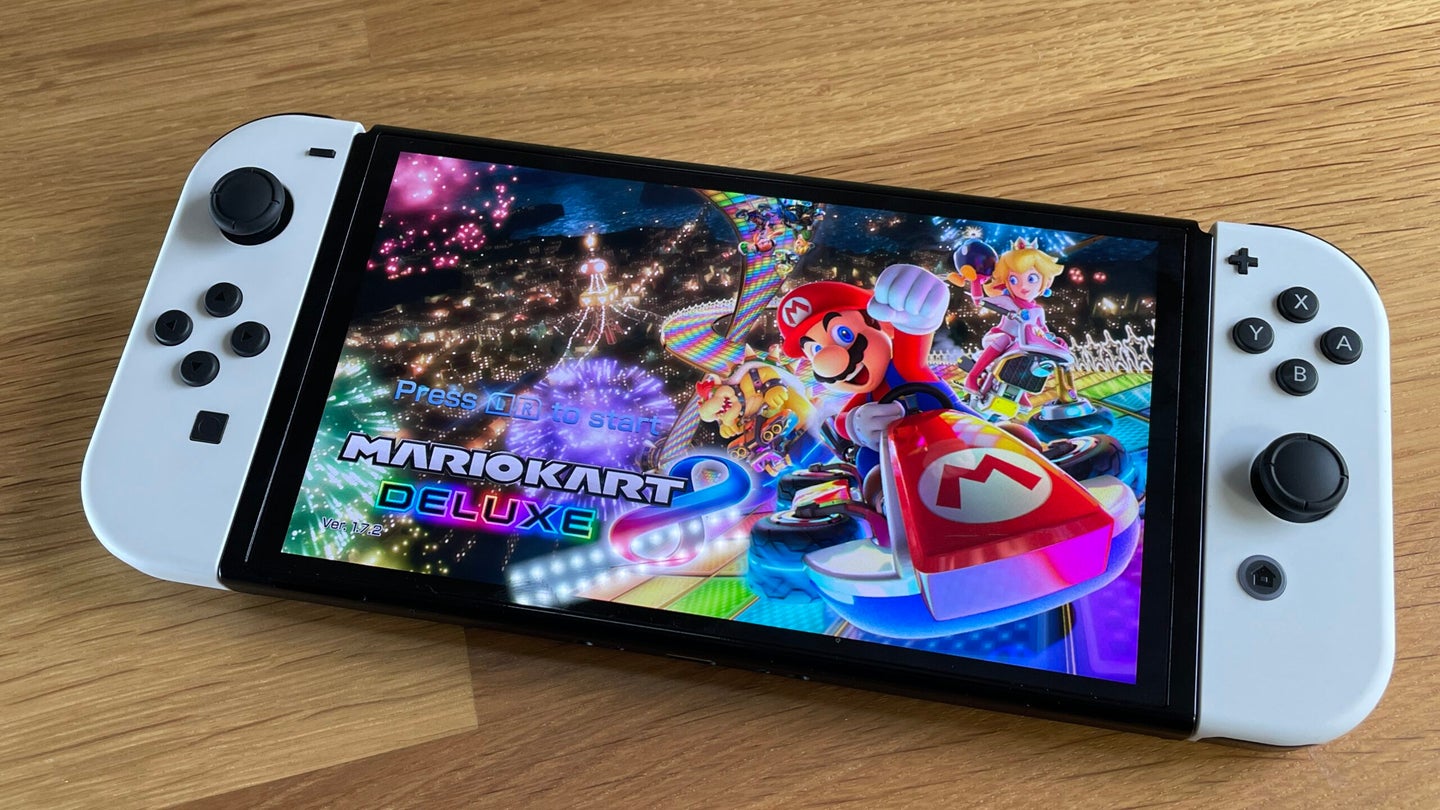 The Nintendo Switch OLED, a revision of the company's current console, has a brighter, more vivid display. Mike Epstein
SHARE

The Nintendo Switch OLED isn’t a new console, per se. It is what industry observers call a “mid-cycle refresh”—a new version of an existing console with some minor changes and upgrades, but nothing so drastic that it would change what games it can play. Almost every console of the past few generations has had at least one (PS4 Pro, Xbox One X, etc). In fact, Nintendo already “refreshed” the Switch once in 2019 with a model that improved its battery life. Sometimes the manufacturers make a big deal out of it. Sometimes they don’t.

In this case, Nintendo didn’t have a choice: Fans made a big deal out of it thanks to rumors about its capabilities prior to Nintendo announcing the product. As I mentioned in my first look at the console, the Switch OLED doesn’t reflect those rumors. It is very much the same Switch as ever. The main change comes in the form of a larger OLED display, which can show more vivid colors and sharper contrast. It also rectifies a couple of the console’s most glaring weaknesses: its built-in kickstand and the lack of an Ethernet port on the TV dock. So the Switch OLED is an upgrade, but a minor one. It doesn’t play any new games. Some games look better, but only in handheld mode, and the Switch’s technical performance remains unchanged. Except that, on a philosophical level, it’s actually a major paradigm shift.

That bigger, sharper screen makes Switch games look better than on most TVs for gaming. That firmly pushes the Switch, a hybrid system that you can play as a handheld device or as a “home console” on a TV, toward being a portable device by default. Depending on the person, that may seem obvious or it might come as a surprise. Either way, the hardware doesn’t lie. The Nintendo Switch OLED is an upgrade that puts handheld fans first.

So much of what makes the Nintendo Switch exciting emanates from its bigger, sharper screen. The Switch OLED has a 7-inch display, up from 6.2 inches on the original Switch. Meanwhile, the console itself measures 4 by 9.5 by 0.55 inches (HWD), almost identical to the original device. (The original Switch is 0.1 inches narrower.)

How does that work? As with the Apple Watch Series 7, Nintendo “created” real estate for the expanded screen by reducing the size of the bezel around it. Reducing the bezel not only allows Nintendo to maintain the form factor; Reducing the bezel makes the screen feel substantially larger, especially if you’re used to the screen on the original Switch. With only a small amount of dead space around the actual display, it is easy to feel sucked in by Switch games in handheld mode.

Though the bigger screen does wonders, it’s the actual OLED display that’s the star. Organic light-emitting diode, or OLED, is a screen technology in modern TVs and smartphones that allows each pixel on the screen to provide its own backlight. The individual pixels can turn off when necessary, allowing for deeper blacks and stronger color contrast, which leads to sharper lines and more vivid colors.

Large, bright swaths of color appear bolder and brighter on the Switch OLED. In games like Super Mario Odyssey, the red of Mario’s outfit looks more saturated and intensely red than it did the original Switch or on a 1080p TV. OLEDs are most frequently praised for their dark tones, and the Switch OLED lives up to that standard. In games like Metroid Dread and Luigi’s Mansion 3, which both feature lots of low-light situations, the OLEDs generate a range of darkness and light surpassed only by TVs with high-dynamic range (HDR), a technology that enhances a screen’s ability to dynamically brighten or darken specific points.

While I find the extremely bright colors thrilling, Nintendo does give you the ability to reduce the vibrance of the colors in settings. By default, the console is set to “vivid” mode and you can change the screen to “normal,” which replicates the original Switch’s brightness and color depth.

What about in docked mode?

Playing the Switch in docked mode is virtually unchanged on the Switch OLED. The new screen doesn’t impact how Switch games look on your TV. The console’s performance—framerate, load times, etc.—has not changed at all, either, so the games run as smoothly as ever in both docked and handheld mode.

That said, once you play the Switch OLED in handheld mode, you may see the docked version in a new light. Despite the fact that Switch games run at a higher resolution when docked—1080p in docked mode versus 720p in handheld—many Switch games are more visually appealing on the Switch OLED screen than on a TV. Certain games, including Metroid Dread, look a bit washed out on a TV, compared to the dense, intense colors of the OLED’s handheld screen. Again, without equal enhancements to handheld and docked modes, there’s a decided emphasis on handheld play. Does that mean you should avoid the Switch OLED if you like playing in docked mode? Absolutely not. But it means that docked-first players might find their habits changing when they see the OLED screen.

Beyond the screen, the Switch OLED offers a few small, but useful hardware upgrades. Internal storage has doubled to 64GB versus 32GB on the standard Switch. It’s a big jump, but 64GB is still a very low amount of storage when Switch games can require upwards of 30GB apiece. You can still enhance the console’s storage with a microSD card, of course.

The slot for said microSD card is slightly more exposed than before because it’s under the much larger, more useful Switch OLED kickstand. The original Switch’s kickstand was arguably the console’s worst feature: A narrow strip of plastic, it could barely hold the console’s weight, snapped easily, and tipped over constantly. The new kickstand panel is roughly half the console’s height and spans its entire width. Though the hinge feels a bit stiff, it’s easily adjustable and, above all, sturdy. You can now use the console in “tabletop” mode, which is also a much more appealing option because of the enhanced screen.

While the picture didn’t get a boost in docked mode, the dock itself got an aesthetic redesign, with rounded corners that are less likely to scratch the screen when you insert the console into it. The new dock also now features a built-in ethernet port, so you can connect the Switch to the internet via a wired connection. (There’s an Ethernet adapter for the original Switch dock.)

As a result of all the changes to the handheld design, the Switch OLED is slightly heavier than the standard model—approximately .93 pounds, versus .88 on the original Switch. While heavier is never better in a handheld, I can’t say that I noticed a tangible difference.

As a reminder, the Nintendo Switch OLED is not the “Switch 2” and there’s a limit to how much Nintendo can reasonably be expected to change. At the same time, the great strides made in the Switch OLED design emphasize some of its remaining flaws. Playing the Switch OLED in docked mode and finding a “flatter,” less saturated picture relative to the handheld OLED display is the most obvious example, but the Switch “tells on itself” in other ways.

Playing the Switch more in handheld mode, you’re forced to wrestle with Nintendo’s detachable Joy-Con controllers, which don’t offer any ergonomic support for your hands and seemingly have a tendency to break over time. Relative to the much more powerful PlayStation 5 and Xbox Series X, the Switch’s load times also feel more disruptive than they did when we first examined the Switch five years ago. Slapping the OLED screen on the Switch is like a facelift: The games may look better, but you can still see signs of the console’s age around the edges.

What about battery life?

Battery life is the rare instance of a spec that hasn’t changed and seems somewhat impressive for it. According to Nintendo, the Switch OLED can achieve the same estimated 4.5-9 hours of battery life as the standard model. That bore out in my anecdotal battery tests. Prior to launch, many pundits and critics (myself included) worried that the OLED screen would negatively impact battery life. It seems that, whether or not Nintendo took steps to offset the increased power usage, you get the same amount of playtime on the new version of the console.

So, who should buy the Nintendo Switch OLED?

The Nintendo Switch OLED is the best version of the Switch, hands down. Even with the price going up from $300 to $350, its enhancements are more than worth the price of admission. The larger question of whether or not you should buy a Switch comes down to personal preference, especially if you’re choosing between the Switch and the PS5 or one of the new Xbox consoles, but the Switch remains a worthy console.

The question is trickier if you own a Switch and are looking to upgrade. On the one hand, the Switch OLED makes most games look better in handheld mode, to the point where I’m playing games that way more often. On the other hand, if you aren’t precious about visual fidelity, it’s ultimately the same device. If you’re committed to playing in docked mode, or just don’t feel a strong urge to upgrade, I’d say you should trust that instinct.