Nintendo Switch review: Great for games at home or on the go, and that might be enough

The Nintendo Switch is a wonderful, versatile, if underpowered, games machine, but won’t anchor your home theater. 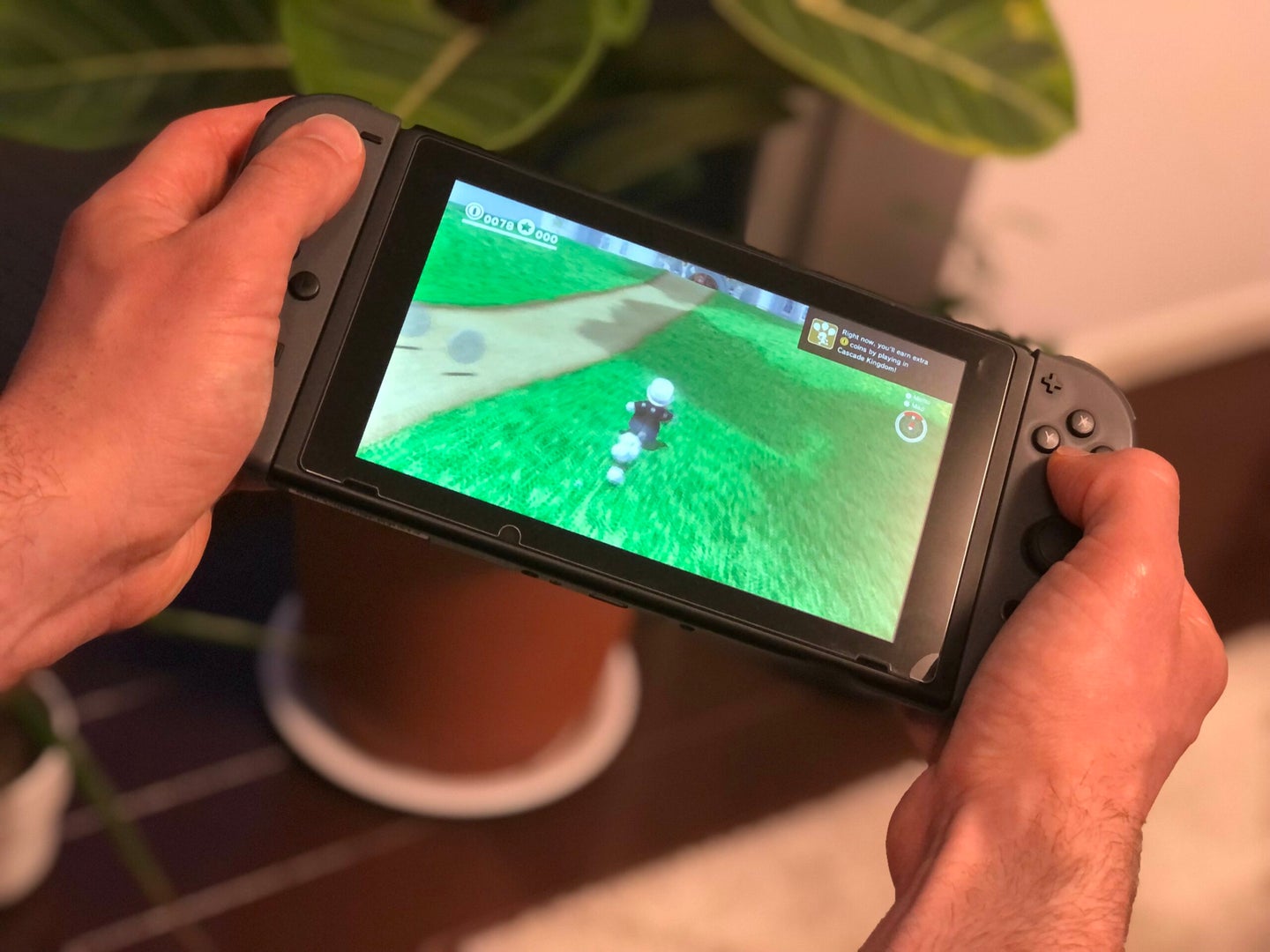 The year 2020 was huge for video games. With the introduction of the Sony Playstation 5 and Microsoft Xbox Series S and X, the console landscape experienced a near-complete overhaul. That is, of course, except for the Nintendo Switch. Despite its age, the newly minted “elder statesman” of game machines saw massively increased demand during the global pandemic, leading to shortages that are still present in many territories today. The Switch is by far the least powerful machine on the market, but its charm, portability, and a killer roster of beloved game franchises give it undeniable appeal.

The Switch initially impressed players with its ability to “switch” from home console to handheld game console and back again. As it has matured, though, it has shifted its focus to offering a great games library at a much lower entry price than Sony and Microsoft’s half-a-G set-top boxes. A secondary Nintendo Switch console, the Nintendo Switch Lite, dropped the “switching” completely, opting instead for being a dedicated handheld game console at two-thirds the price of the original Switch—check out our Nintendo Switch vs. Lite comparison. Generations ago, Nintendo marketed itself with the tagline, “now you’re playing with power,” but power isn’t what you’re playing with anymore. Instead, it’s value, great game choices, and versatility. Even three years after its introduction, the Switch is easy to recommend to players looking for great games first and a technological showcase second.

Nintendo zigs when the giants zag

Nintendo has a lot of wins in its history, but it’s not undefeated. The too-much-too-soon Wii U was a huge miss in 2012. It racked up less than 15 percent of the sales of its predecessor, the Wii. The Switch came quickly, only five years after the Wii U, and reversed Nintendo’s fortunes, with roughly 85 million units sold to date. (These numbers include both the original Nintendo Switch console and the handheld gaming systems-only Lite.)

Regardless of how the market responds, there are a few guarantees when it comes to any Nintendo console. One is great first-party exclusive games. Nintendo has created some of the most iconic and revered game characters and series in gaming history, with its mascot Mario leading the way. However, the versatility of the Switch is likely the main component to its early success. In urban markets and especially its home country of Japan, the small size, portability, and playable-on-public-transportation appeal of the Switch fit the lifestyle of young adults. In more suburban areas, it keeps the kids occupied in the backseat.

Once the user base was established, the Switch, surprisingly, became home for many indie games and PC ports of the more technically modest variety, including widely acclaimed or zeitgeist-grabbing games like Hades and Among Us. Now the library, and the $300 ($200 for Lite) price point, are the power play for the already massively successful machine.

Switching up designs with the Nintendo Switch

While there are different varieties of the Switch, almost all the differences are cosmetic. In the standard Switch package, you’ll get the screen unit, a dock for when you want to play on your television, a left and right control unit (called a JoyCon), and a plastic frame for making them into a single Nintendo Switch controller. JoyCons are designed to be used as discrete controllers for some more popular games (Mario Kart 8 Deluxe), meaning the Switch comes with “two” controllers, but games requiring complicated inputs (The Legend of Zelda: Breath of the Wild) require both to be used simultaneously, which is where the plastic frame comes in.

As separate controllers, the JoyCons are small for adult hands, and an alternative controller like the Nintendo Switch Pro Controller ($60) will likely be more comfortable. It is close in form factor to the controllers of the PlayStation and Xbox and is superior to the JoyCon-and-frame experience. As with just about every other Nintendo-produced Switch game and peripheral, the Pro Controller’s price hasn’t dropped. If you’re waiting for hardware to get cheaper before leaping in, you’ll probably wait for a very long time.

Another separate accessory that is a must for any Switch user who plans to play digital games is an external memory card. The Switch has a paltry 32GB of internal storage but has a port for microSD cards for additional space. A 512GB microSD card runs anywhere from $70 to $100. Even with the purchase of a Nintendo Switch Pro Controller and a large microSD card, the total buy-in for a Switch is cheaper than top-of-the-line editions of the PlayStation 5 or Xbox Series X ($430 vs. $500).

Despite the great game library and lower cost of entry, there are three main arenas in which the Switch simply cannot compete with its beefier competition. The online environment for Switch games is a minnow among sharks. One of their premier multiplayer games, Super Mario Party, added online multiplayer support in 2021, two-and-a-half years after its initial release. This is sadly emblematic of Nintendo’s approach to multiplayer: everything is designed with local play in mind, online is an afterthought. This includes needlessly complicating the online infrastructure of games with friend codes, and very weak offerings of “free” monthly subscription games compared to Sony’s PlayStation Plus and Microsoft’s Xbox Live Gold.

The second area is support for additional media services. Both the PlayStation 5 and the Xbox Series X/S can double as quality media centers for your television, allowing you to access streaming services, play videos from USB memory or streamed from your own network, and can output theater-quality sound. While you can enjoy the most popular services like Netflix on Switch, don’t expect output beyond 1080p. That leaves your 4K or 8K television wanting for pixels.

Lastly, as mentioned before, the output power of the Switch is simply not on the same level as Sony and Microsoft’s latest offerings. Many games won’t show up on the Switch because they cannot run on the hardware, and even some games from PS4 and Xbox One (The Witcher III) have trouble meeting the same performance levels. Of course, none of this matters if you’re endlessly charmed by Mario or Nintendo’s other IP. But, that doesn’t apply to everyone.

If you decide to get a standard Switch, the set-up is very simple. Connect the dock to your television via HDMI cable and plug it in with the included USB-C cable and AC adapter. Slide the screen into the open space in the dock and use the JoyCons as wireless remote controls for the menu system. The JoyCons have motion control capabilities even better than the Wii’s remotes and are relatively intuitive. As mentioned above, the maximum output of the Switch is 1080p. (The screen in handheld game console mode is 720p.) Switching the Switch is also simple. Pull the screen out of the dock, slide the left and right JoyCons into the grooves on the side of the screen, and it’s ready to go. Battery life on the current iteration of the hardware has improved, but it’s rare to get more than 6 hours of gaming time on a single charge, so bring an external battery for longer trips.

Ninten-does what Sony and Microsoft don’t

The portability of the Switch is its most desirable feature. Simply put, its only competition in portable gaming right now is smartphones and tablets. Both of Sony’s attempts to enter the portable gaming space (PlayStation Portable and PlayStation Vita) were noble failures. Nintendo’s 3DS is still chugging along, but high-profile software releases are few and far between, and most series, including Pokemon, have moved to the Switch.

At the moment, both Sony and Microsoft are working on building out their cloud-based game streaming options, but they’re nowhere near as simple as firing up a game on the Switch and taking it out the door. Also, playing games built for high-powered consoles on a tiny phone screen negates some of the benefits of juiced-up graphics.

Straight up, if you want a dedicated portable game console, you’re getting a Switch. If you have no plans to ever play on a television, a Nintendo Switch Lite will save you $100, but even without a TV connection the ability to disconnect the JoyCons from the Switch screen and play a few rounds of Mario Kart or Super Smash Bros. with a friend or family member is not something the Lite offers. Since 2017, I’ve enjoyed such sessions while sitting in an airport, waiting in line, and in the park on a sunny afternoon.

The gaming landscape is more crowded than ever. Three companies make gaming consoles, PC gaming is extremely healthy, and mobile devices have their own games and genres. The Switch competes in some ways with all of these realms. It features some of PC’s most interesting indie games. Nintendo’s history as a console maker paints it as a rival to Sony and Microsoft whether they are doing similar things or not.

The Switch’s portability means it may compete for attention with a phone or tablet. However, The Switch remains unique. Its game catalog is unassailable, with many all-time titles, both new and re-released. It feels like a gaming machine in ways that tablets, phones, or PCs never quite do, and doesn’t require as many updates as titles on those platforms (or, frankly, on Sony and Microsoft machines).

Nintendo’s reputation for quality is well-earned through 40 years of video gaming history, and the Switch carries that tradition proudly. It’s hard to imagine someone purchasing a Switch knowing what the machine is and being disappointed in it. It has carved out its own little place in the industry. Many are clamoring for an iteration featuring a better battery and a 1080p portable screen, but even more are simply waiting to see how Nintendo innovates next. Rumors suggest there could be a Switch Pro coming down the line, but details are sparse and even a new model may not be enough to drop the price on the original Switch console.

So, who should buy the Nintendo Switch?

The Switch is a game machine for people who want to play games. That may seem like a self-evident statement but gaming is now dominated by an electronics megapower and a computing vanguard. Sony and Microsoft are interested in much more than simply making interesting games that are fun to play. The PlayStation and Xbox want to dominate your home theater set-up; they want to be the digital totems at which we all e-pray for all our entertainment needs.

If you only want one game machine, and you want to play at home, and you want your game machine to do a lot of other things for you and take advantage of your high-end television and sound systems, the Switch is not your first choice. The Switch’s biggest weakness and greatest strength is its versatility and dedication to being a gaming platform. If you love Nintendo’s characters and franchises or are looking at dedicated handheld game systems, the Switch is an easy buy. Playing doesn’t always need power.

Nicholas Ware holds a Master’s in Popular Culture Studies from Bowling Green State University, and has a wide variety of academic and popular published work, mainly focusing on video games and film.