Pokémon Shuffle Is The First Official Pokémon Game For Smartphones

Gotta catch 'em all on iOS and Android 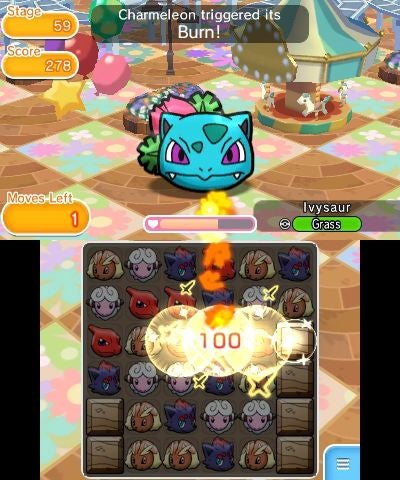 The Pokémon Shuffle mobile app has finally hit iOS and Android. The free-to-play title is the Pokémon first to start on a Nintendo gaming system and migrate over to iPhone and other popular smartphones.

While the Pokémon Company bringing a game to the mobile scene is big news for the group — the company has held off on official mobile apps for most of its history, instead requiring players to buy dedicated Nintendo consoles — this shouldn’t come as a surprise to fans. Earlier this year, the Pokémon-affiliated gaming company Nintendo announced a partnership with DeNA, a mobile development company, to bring their beloved series to smartphones.

And given that Pokémon Shuffle already bears many similarities to popular mobile matching games like Candy Crush or Bejeweled, it makes perfect sense that the ‘Company would dip their toes into the app-making waters with this puzzle game. With the original 3DS game being free with in-game purchases, Pokémon Shuffle will feel right at home on iOS and Android devices.

Pokémon Shuffle may be the first Pokémon game to make the transition from game console to mobile, but the company has tried their hand at app-creation in the past. Non-game companion apps like the Pokédex or the official Pokémon Jukebox app. We’ve even seen a trading card game simulator come exclusively to iPad, but never a port of an existing 3DS game. Pokémon Shuffle’s transition from 3DS to iOS and Android is a good sign.

That said, the release of Pokémon Shuffle for mobile isn’t exactly the full-fledged Pokémon game for iPhone many have been waiting for, but it’s a great start. We’ll continue to see priority given to Nintendo hardware, but it is finally ready to enter the future with the help of the Nintendo/DeNA. And that comes in the form of not only smartphone games, but plans for a unified user account system for Nintendo players, allowing them to save their game states and data in the cloud and access it on multiple devices.

Studies from App Annie and IDC show dedicated gaming handhelds slowly on the decline. The ubiquity of smartphones have video game fans buying more apps overtime and fewer full-fledged titles on consoles from Nintendo and Sony. It’s clear why the company that made Mario into a household name would want to make their way into the mobile space.

Pokémon Shuffle for iOS and Android is a strong first step for the company. The game is well-received amongst Pokémon fans—if the scramble for Shuffle passcodes are any indication.

The app isn’t without its flaws: the Pokémon Shuffle app can only be played with an active data connection, that is, when the player is on WiFi or has cell service. And if you’re hoping to play both 3DS and app versions and have them sync info back and forth—or even transfer over your Pokémon Shuffle save file to the new mobile port—you’re out of luck.

Given Nintendo’s longstanding reticence toward making games for other devices outside of the company, it’s still unreasonable to expect the next flagship Mario or Zelda title to make its way to an Apple or Google device first. But it seems the Pokémon Company is beginning to warm up to mobile. Let’s hope the trend continues.