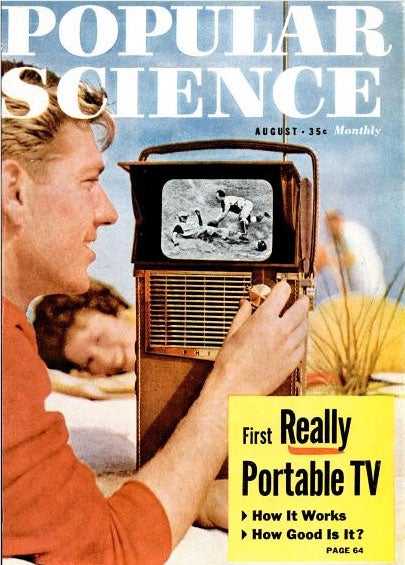 In between the newest line of Amazon Kindles, the upcoming iPhone 5 announcement, and the ever-increasing ubiquity of cameras and video game consoles, it’s safe to say that we’re living in the golden age of gadgets. For all the purposes they serve, our little devices reflect a singular priority among gadget geeks and newbies alike: sleekness. Few things make a gadget more desirable than beautifully packaged convenience.

Of course, the definition of “sleek” is relative to what’s available for purchase. Nowadays, the 15-inch MacBook Pro is considered heavy at 5.6 pounds, but in the early 1920s, Corona’s seven pound typewriter garnered praise for being lightweight. And even though the mid-nineties weren’t that long ago, it’s still amusing to see movie characters from that decade whip out cell phones the size of frying pans. If you enjoy comically large portable devices as much as we do, you’re in luck because we’ve collected several more examples from our archives.

Granted, not everything featured in this gallery is an electronic device — after all, the average person during World War I could hardly envisage living room television sets, let alone portable ones. In late 1917, the hottest portable device was an army bread mixer, which could prepare 6000 loaves of dough in just an hour. The catch? You needed a truck to take it around, which isn’t so bad considering the machine’s capabilities.

Our personal electronics coverage escalated after World War II, beginning with the advent of portable radios and TV sets. Compared to iPods and smartphones, these devices were not small. In fact, a 1959 portable TV was the size of a shoebox (and it weighed 15 pounds, which is roughly equivalent to six 11-inch MacBook Airs). By today’s standards, that’s heavy, but in the 1960s, this device was a revelation. It was the perfect accessory for family vacations. Instead of reading a book at the beach, you could watch a couple of shows on your battery-operated TV set. Instead of telling ghost stories around the fire, you could watch Leave It to Beaver on your 9-inch battery-operated machine (at this point, such behavior was a novelty, and not a cause for derision). Thus began our compulsive need to have gadgets on us at all times.

During World War I, the word “portable” still applied to the military’s truck-sized bread mixers, which could make six thousand loaves of various sizes, weights, and shapes in just an hour. In addition to speeding up the process of baking, this machine was less cumbersome and easier to operate than its predecessors. A crew of five men could do all the work, while earlier arrangements required a crew of 112 to produce the same amount of bread by hand. To use it, you would pour the ingredients into an electrically driven dough mixer. Once mixed, the dough would be kneaded and divided while passing through a small belt conveyer. As a hygienic measure, finished loaves would drop directly into baking pans.

Have you ever seen a typewriter this small? In 1923, Corona released a foldable typewriter weighing just seven pounds (for comparison, that’s 1.6 pounds more than a 15-inch MacBook Pro). Unlike other portable typewriters, the New Corona used a standard 10-inch carriage, which meant that it was compatible with standard office documents. While people at the time might have assumed that smaller machines were less capable than large ones, Corona assured us that its portable device came with all of the customary typewriter features — automatic ribbon reverse, two color ribbon, back space, two shift keys, and more. All this for just $50!

As unlikely as it sounds, newspaper editor Linton Hopkins, Jr. proposed using a portable traffic overpass to de-congest busy street intersections. Theoretically, it doesn’t sound like a bad idea: traffic could move uninterrupted in both directions, and drivers would rejoice at never having to stop at a red light. Moreover, the bridge could be taken apart and installed where needed, for far less than the cost required by a permanent structure.

Television might have been the electronics superstar of the 1950s, but radios experienced a surge in popularity once they shrank down. We reviewed several of the most impressive sets at the time, while urging readers to take note of price, upkeep, performance and looks while picking their device. While there were more than enough radios to choose from, portable sets fell into two basic categories: tube and transistor. Although tube sets were more affordable than transistor sets, transistors were the way of the future: they used batteries more efficiently, they were more durable, and they were smaller than tubes. In fact, all of the four by six by two inch radios we reviewed used transistor technology.

You know how people nowadays are unable to put down their personal electronics while on vacation? That all began in the mid-1950s, when vacationers began toting their new-fangled portable devices on family trips. We encouraged our readers to follow suit. With a battery-operated television set, “you can go to the beach without missing the ball game, enjoy Lawrence Welk from a canoe, catch Jack Paar while camping out or, more practically, keep a child quiet in the back seat on an auto trip.”

Philco’s Safari portable, pictured on the left, weighed 15 pounds and was the size of a shoebox. It came with a handle, a battery use timer, a protective visitor, and a brass stand, as well as the usual television set features, like a volume control switch. The set came with five rechargeable batteries that could last for four hours one one charge (batteries would wear out after 20 charges, though). The set used 4 1/2 watts of power, which was nothing compared to the 200 watts drawn by conventional receivers at the time.

Six years after Philco unveiled its transistor TV, portable television sets went from shoebox-sized to dictionary sized. Most weighed just 10 pounds, and all used rechargeable batteries and state of the art transistors. We reviewed eight popular models, seven of which were manufactured in Japan. Our conclusion? COLLECT THEM ALL. Since each TV served a different purpose, it was hard to single out one set as the one to buy. For instance, the four inch sets were perfect for single viewers who enjoyed cuddling up with their favorite talk show before going to bed. The five and six inch sets were suited for table tops. You could tote your TV set from the kitchen counter to the dining table without much of a hassle. Finally, the nine-inch set could be plugged into your car’s cigarette lighter socket for long drives with the family.

Electronics weren’t the only things that shrank over the years. In 1966, we showed readers how to build their own portable ski tow, which required just three thing: a rope tow, an empty slope, and the rear wheel of your car. This arrangement was capable of pulling 15 people up a slope at one time. As the illustration shows, the device was simple: a stand would prop up the wheel of your car, while a pulley would keep the rope in place. If you cared enough about the condition of your tires, you could always replace it with an old one while using the pulley. After setting up your car, you would fasten the rope to a nearby stake or tree. To use the ski tow properly, you would have to start your car and keep the wheels moving at 5 miles per hour.

E-readers are older than you think. While this microfiche is no Kindle Touch 3G, its specs are impressive considering the year this article was published. The microfiche, which could hold 400 volumes, weighed five pounds and projected text on a four-by-six-inch screen. Unlike today’s e-readers, the gadget was not a digital device; instead, it stored books on sheets of film containing 60 – 98 microphotographs. To read, you would insert insert your film card of choice, plug the device into the wall, and adjust the size of the text using a fingertip lever. At the time, Microdisplay Systems President George Margolin told us that he planned to release the device in the spring of 1972, for under $150.

We’ve gotten so used to collecting footage on our smartphones that it’s easy to forget how much of a chore recording home videos was before everything went digital. For a refresher, take a look at this feature from November 1979. In addition to a battery-operated camcorder, capturing events on tape required a $1200 portable VCR (for comparison, color cameras used to cost between $750 and $1400). Sure, your bank account would suffer from the purchase, but owning home videos was a priceless novelty for sentimentalists and gadget geeks alike. We hailed RCA and Akai’s portable VCRs for their small size and ability to use $17 video cassette tapes instead of outdated Super 8 film.

Chances are, you haven’t used a phone this big since the mid-Nineties, but in 1985, we declared the car-powered cell phone as one of the most exciting portable handsets to come out of the electronics markets. Back then, there were three types of portable phones available. The “go-anywhere cellular telephones,” which could be unplugged from your car and hooked up to a battery pack, was about the size of a small typewriter. There was also the briefcase model, which was exactly what it sounds like. Finally, the pocket-sized portables used a smaller battery than other varieties. To our delight, the 1985 models used a system A-B switch that let roaming users select the least-used band in their area.

While cell phones had a long way to go before becoming a standard personal item, we already had a clear vision of how they would revolutionize everyday life. “Cellular systems make possible mobile offices with fast access to national data bases, electronic mail, and main-frame computers at offices,” we said. “Some third-generation cellular telephones are likely to be packaged in a briefcase along with a modem, computer, and small printer.”

In 1985, we visited Sony’s headquarters in New Jersey to play with their two-pound Mini-8, the world’s smallest commercial camcorder. Unlike the portable VCR we looked at in 1979, Sony’s device used an audio cassette-size 8-mm videotape to record pictures. Despite its small size, Sony’s camcorder was different than today’s as it wasn’t designed for playback. In order to watch your videos, you would have to hook the device’s separate player-recorder into the TV.

The Zenith TurbosPort 396 might have been one of the first true portable computers, but with a weight of 18 pounds, this was no laptop. At the same time, this computer was something to behold: in addition to being briefcase-sized, this computer boasted an LCD display with an enviable 20:1 contrast ratio. The TurbosPort was also quick and efficient, thanks to its 12-megahertz microprocessor, its 2MB RAM, and its 40MB hard disk. All this for just $7999? Who says that bigger is better?