Nintendo just announced their successor to the revolutionary Wii, to be called the Wii U, at this year’s E3 conference... 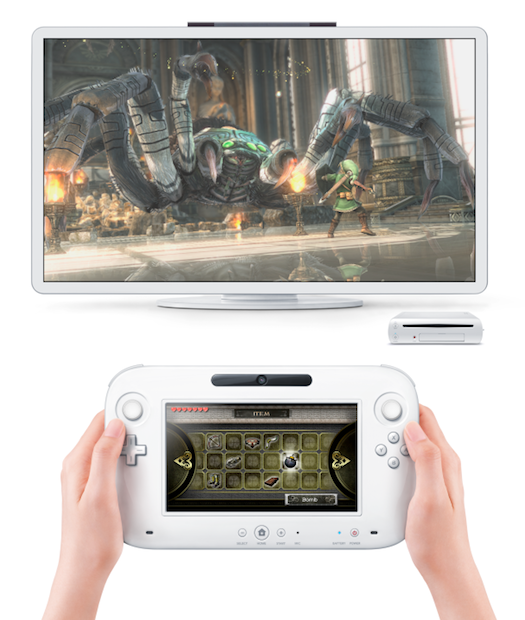 Nintendo just announced their successor to the revolutionary Wii, to be called the Wii U, at this year’s E3 conference in Los Angeles. We’ve only gotten snippets and tidbits of information, but we do know that the–as in the original Wii–the most important part of the Wii U will be the controller. This time, it’s a giant, tablet-like, touchscreened beast that packs an accelerometer, camera, gyroscope, and a full array of Wii buttons.

The Wii U will be a new console, looking something like a beefed-up version of the Wii. We do know it’ll be fully HD-ready, unlike the Wii–that means 1080p resolution and (finally) an HDMI-out port. Nintendo says the console will be released sometime between April and December of 2012, and…that’s about all we know about the console itself.

But like the Wii, the controller is the hardware that matters, and the Wii U’s is a real kitchen sink of a controller. It’s got a giant 6.2-inch touchscreen–that’s closer to tablet than smartphone, on the touchscreen-size-meter–that might be resistive, judging from the demos we were shown. Resistive touchscreens are largely out of fashion, in favor of the capacitive screens on smartphones and tablets–capacitive screens are more precise, allow for multitouch, and usually offer better clarity, though resistive touchscreens, like in Nintendo’s DS and 3DS handhelds, are cheaper and permit the use of a stylus.

The controller has the full spectrum of Wii buttons, as well as two joysticks, on either side of the screen. Above the screen, there’s a front-facing camera and mic, and embedded inside are the usual range of modern sensors, including an accelerometer and a gyroscope to precisely map movement, as well as motors to aid in vibration. It’s got some sort of wireless communication (maybe Wi-Fi?) that allows it to exchange tons of data with the console–you’ll be able to flick videos and photos from the controller to your TV, just like Apple users can do with an iPad and Apple TV.

As the controller is a sort of jack of all trades, there are all kinds of possibilities as to what can be done with it. Nintendo showed off games that can be instantly moved from the TV to the controller, and games that use the second screen for added info and to un-clutter the TV (sort of like Sega’s failed Dreamcast memory cards). There were games that give the player with the Wii U controller a totally different view of the game–a private second screen–that can be controlled with accelerometers, like an iPad. There was a giant gun-like accessory that the controller clips into, so you can use the screen like a sight. Oh, and it does video chat and web browsing–but it’s not a portable console, Nintendo was quick to point out. It’s wholly dependent on the Wii U console.

We’re excited about the Wii U–the instant mirroring of a home console is pretty amazing, and it definitely opens up lots of options for any developers who want to explore it and do something different. We should probably remember that the whole “look down at your controller to see your football plays or whatever” thing didn’t work well on the Dreamcast–users found it distracting to shift their eyes back and forth between two screens. But the Wii U is much, much more powerful, and Nintendo has a history of making this sort of high-concept hardware work very well.