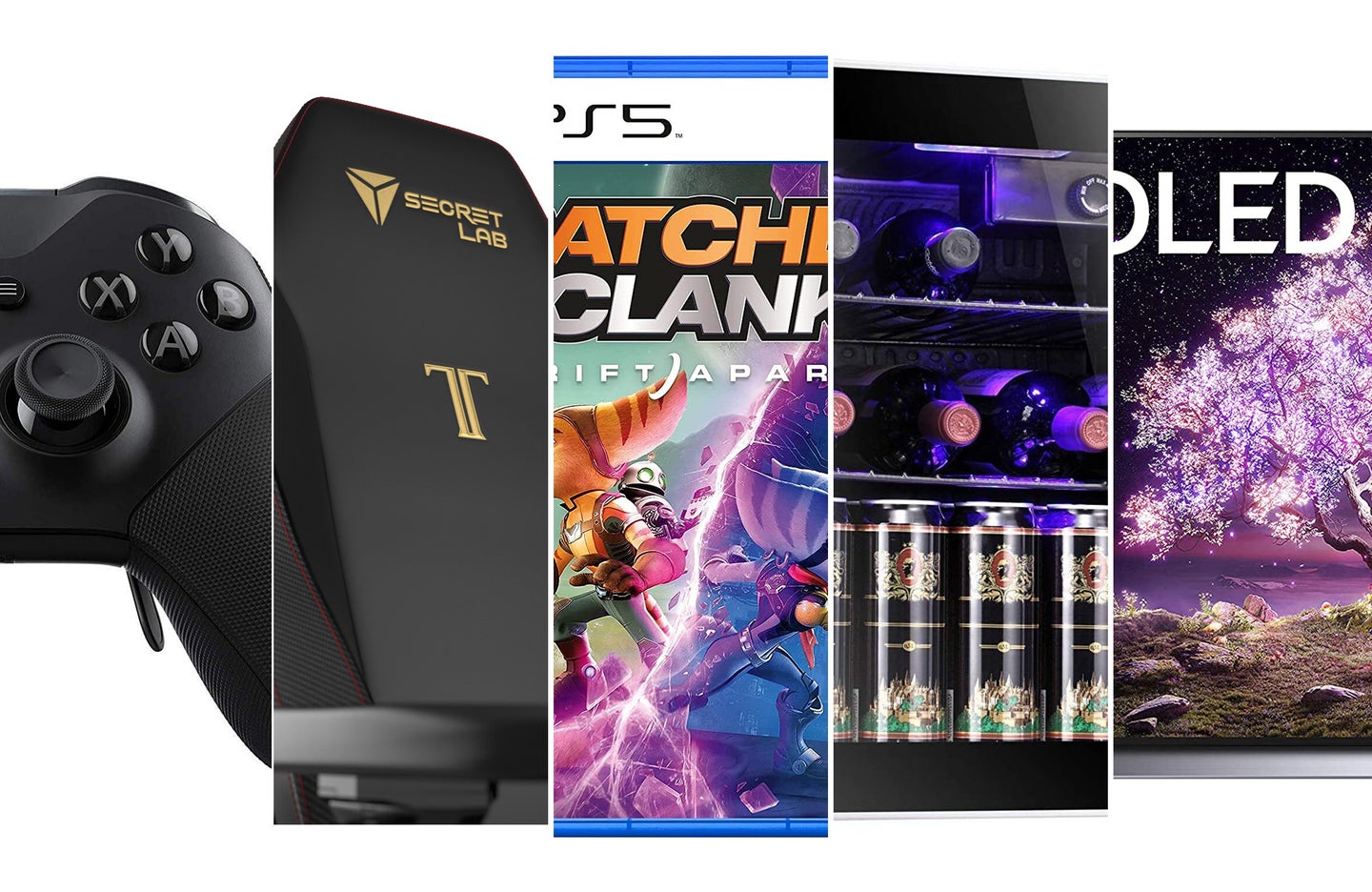 Gifts for gamers: A guide for people who don’t play video games

It isn’t easy to give the gift of gaming if you don’t know your way around a console, but these things might be the perfect.

Picking out the best gifts for gamers can be tricky if you aren’t into games yourself. Video games have been my favorite pastime since I was four years old. As a kid, I made my parents’ life easier around the holidays with constant clamoring about games I wanted. They always knew what to buy when it was time to shop for presents.

When I got older, I stopped yelling game names at them: First, because I learned my manners. Then, later, because I stopped needing them to buy my games for me. The good gift ideas weren’t things they were going to figure out for themselves. If you have reached this point in your relationship with a video game enthusiast in your life—child, friend, partner, whoever—let me, a gamer, help you out by throwing a few ideas your way.

A word of warning, before we begin: Not all of these gifts will work for every person. It will help if you know what platforms your gamer prefers—PlayStation 4/5, Xbox, Switch, PC. Also, we’re blowing right past the part where we recommend you buy them a PS5, Xbox Series X, or Nintendo Switch OLED. If they want those things, I assume they’ve already made that evident. (Also, they’re all very hard to find). These gifts will enhance your person’s gaming life by making it easier, more comfortable, or altogether more awesome.

The best gaming controller for Xbox and PC

If your gamer prefers to play on an Xbox One, Xbox Series S, or Xbox Series X, this is the best gaming controller. The Xbox Elite Series 2 is an enhanced Xbox controller with a slew of extra features. Ergonomic rear paddles that make it easy to quickly tap a button without extending your thumb. Customizable analog sticks with different lengths and shapes to fit your fingers. The standard Xbox controller is great, but the Elite Series 2 is better balanced and feels better in your hands. (Also, it has a rechargeable battery, so no more AAs). At $159.99, it’s absolutely an extravagance, your person probably wouldn’t buy for themselves. But when they get it and use it, they’ll absolutely appreciate it.

A mini fridge, with or without memes

When Microsoft unveiled the design of its newest Xbox console, the Xbox Series X, in December, 2019, people reacted by saying it looked like a refrigerator. On Twitter and Reddit, people whipped up a bunch of memes. Jokes were made, fun was had. Nearly a year after the console launched, Microsoft recently made an actual mini-fridge shaped like an Xbox Series X, which you can buy and use to store up to 12 cans of soda, beer, or whatever your gamer guzzles when they chill out on the couch. At $99.99, it’s actually pretty cheap for a mini-fridge. But the best part about it is that it’s a timely, funny thing that will make a Very Online gamer giggle.

Here’s the tough part. Like the Xbox Series X console itself, the fridge is a hot commodity. Retailers are already sold out. Microsoft says there will be another wave of units shipping in December, but you’ll need to be at the top of your online shopping game to get it.

The general idea, a mini fridge, isn’t a bad choice for any video game fan, though, especially if they have a special game room or home office where they play. No one likes having to pause their game to run and grab another soda or beer in the middle of a game, especially if said game is online and cannot be paused.

There’s a wide world of mini-fridges out there for you to choose from. I personally like this one from Antarctic Star. It’s more expensive than the Xbox fridge, but it’s also substantially larger and deep enough to store bottles of wine, among other things. It also has a blue LED in it and, as everyone knows, gamers are drawn to colorful lighting like a moth to a flame.

The concept of a gaming chair seems silly. I resisted getting one for years on principle. But, really, a gaming chair is just a really nice office chair, and in the work-from-home/play-from-home/be-at-home era, having a chair that provides real lumbar support is a huge deal. It’s cool and good for their health: As far as gifts for gamers go, you can’t do much better than that.

My favorite gaming chair brand, Secretlab, is a little pricier than many of its competitors, but you get what you pay for from their chairs. The newest model, the Secretlab Titan EVO 2022, has built-in lumbar support, and is easier to customize than an external lumbar pillow. It also has adjustable “four-way” arm rests, which can slide forward and back, as well as pivot towards or away from your body. Most importantly, the adjustable seat lets you lean back the entire chair, or tilt the back, like an airplane seat, all the way back so you’re lying down flat. (Then it’s nap time).

If your person’s a big fan of a specific esport like DOTA 2, League of Legends, or Overwatch, Secretlab makes special edition chairs with unique color schemes and logos on them. They also make versions with embroidered esports team logos. If they’re looking for something more akin to a traditional office chair, I’d say the standard model looks pretty sharp, despite the big logos plastered on the back and neck pillow.

You can never have enough storage for your games. Whether you buy your games physically on a disc or purchase them through a digital store on your console of choice, every game you own requires a download before you play. And games are getting bigger than ever. The Xbox Series X and Series S come with a 1TB hard drive. The PlayStation 5 has slightly less. Luckily, all three of these consoles give you the option to install an extra drive to expand your storage. Unlike past consoles, though, they require high-speed storage,  so you can’t just buy any old hard drive to do it.

With PS5 storage, things get a bit more complicated. You can install an off-the-shelf internal M.2 NVMe hard drive in your PS5, but it must meet a certain set of size and read-speed requirements. I’d personally steer you towards a card I’ve personally installed and tested, the SeaCuda 530 NVMe SSD with heat sink. This drive (or any PS5-compatible M.2 drive) is also a great gift for a PC gamer in your life, especially if they tend to build their own machines. Like I said, you can never have enough storage.

The most obvious gifts for gamers are new games, but picking the right one(s) often makes it quite challenging. Unless you play games with them regularly, you may not know their taste, what they’ve played, what they’re looking forward to. It can be a minefield.

For Xbox and PC players, there’s an easy solution. Microsoft offers a service called Xbox Game Pass Ultimate, which gives you access to a Netflix-like library of over 100 games that you can download and play whenever you want. Game Pass includes access to all first-party Microsoft-published games, including the year’s most highly anticipated Xbox exclusive, Halo Infinite.

The Ultimate service, which combines access to the Xbox console library, Windows PC library, and a selection of streaming games that lets you play Xbox games on your phone and other devices, costs $14.99 a month, and Microsoft sells 3-month subscription gift cards at a slight discount. (One that may be amplified by holiday sales). You can buy access to the Xbox Game Pass for consoles and Xbox Game Pass for PC (Windows) separately, but Ultimate is definitely the best deal.

If your gamer prefers the PlayStation 5 or Nintendo Switch, you’re back to picking individual games. We have lists of the best PS5 games and the best Switch games, which you can check out for ideas, but I also have a few personal recommendations of my own.

On PlayStation 5, the single most important game that every PS5 player should have is Ratchet and Clank: Rift Apart. Not only is its frantic action-platformer gameplay a wild roller coaster ride, it showcases the power of the PS5 with visual effects you can’t find elsewhere. This is a game where, instead of using a grappling hook to pull yourself to a high walkway, you use a hole in space and time to pull the walkway to you.

For older players with a taste for spooky (and very difficult) games, my favorite game of the year is a PS5 exclusive called Returnal, which combines elements of many different game types to create a uniquely challenging and spooky experience.

My favorite Nintendo game of the year is also kinda spooky and challenging (but much more kid friendly than Returnal). Metroid Dread revives a long dormant Nintendo franchise to tremendous fanfare. Bounty hunter Samus Aran returns in a new 2D adventure, where she has to explore an abandoned facility full of seemingly indestructible robots that want to kill her. In the kid-friendly zone, don’t sleep on New Pokemon Snap, a fantasy photography game about taking photos of every gamer’s favorite adorable pocket monsters.

If you really love this person, and you have hundreds or thousands of dollars to spend on their gift, a new TV is the nicest thing you can give a gamer. With the PlayStation 5 and Xbox Series X, there are new, more advanced TV specs that many older TVs don’t have that will allow you to get more out of your consoles. Even if you don’t buy something super high-end, or if they play games on a Switch or other console that doesn’t have those higher standards, the jump from a 1080p TV to a 4K TV with high-dynamic range (HDR) is an incredibly generous gesture.

Now, since a TV is not something you replace every year or even every few years, I would be remiss if I did not suggest the best possible option. The LG C1 is the best TV for gaming out there right now. Its OLED screen allows for deep blacks and incredibly bright colors that make games pop when they spring to life. It has four HDMI 2.1 ports, which you need to play in 4K at a high refresh rate, which is crucial for getting the smoothest, sharpest picture.

If the LG C1 is out of your price range, we have a list of the best TVs for PS5, which I would recommend as a good starting place to pick out a TV for any gaming setup.