Best Nintendo Switch games for graphics: The titles that justify jumping to the big screen

While not a graphical powerhouse, style shines through in the best Nintendo Switch games. 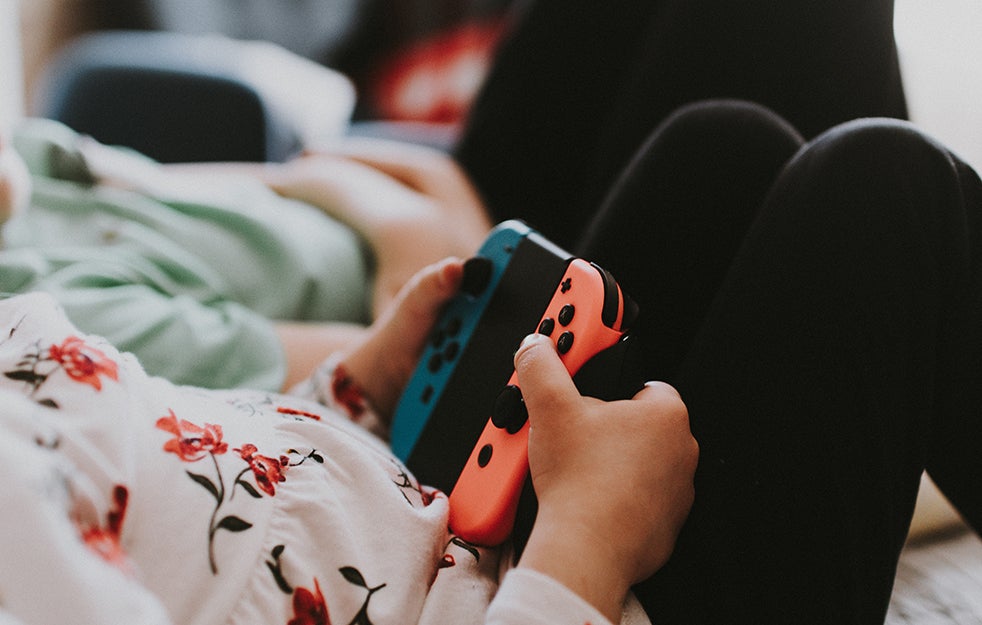 Some of the best Nintendo Switch games you can purchase. Kelly Sikkema via Unsplash
SHARE

The Nintendo Switch is undoubtedly a less powerful games machine than the PS5, Xbox Series S/X, or a top-of-the-line gaming PC. But for Nintendo, power has never really been the point. The Switch does not lack visual innovation or artistic flourishes necessary to create inarguably beautiful games whose visuals fully justify playing them on a really big-screen TV. From 2.5D to watercolors, living animation to sci-fi worlds, the Nintendo Switch can easily be a feast for the eyes. Here are the best Nintendo Switch games that justify playing on your big screen to show off what creativity can do.

Graphics are inherently subjective. While technical shortcomings such as broken polygons or low-resolution textures are clear indicators of “poor graphics,” ultimately what is “good” comes down to taste. You won’t find the same kind of photorealistic visuals you’ll get from next-gen consoles like the PS5 or the Xbox Series X. Rather, the top Nintendo Switch games embrace innovative visual styles to showcase beauty that can’t be measured in polygon counts or resolution.

What world do you want to visit?

Very few games take place in “our reality,” so the world you want to visit in a game will determine the style you encounter. Classic Nintendo mascot Mario has a bright, colorful, cartoony world that defined gaming for an entire generation of ’80s and ’90s kids. Those worlds absolutely still are present on the Nintendo Switch, but gaming has matured with its audience, and dark sci-fi worlds, swirling vortexes of abstract color, classic fantasy touchstones, and high-detail pixel art coexist alongside Nintendo’s signature aesthetic.

But aren’t they just as nice-looking in handheld mode?

Nintendo Switch’s portability is one of its main selling points. The ability to game at home or on the go is a bonus that simply can’t be matched by competitors. However, some games are, frankly, not designed for the relatively puny 6.2-inch 720p LCD screen. Text-heavy games or ports of existing PC/console games can often squish HUDs and text into nearly indecipherably small spaces when played in handheld mode. The Elder Scrolls V: Skyrim, for example, is a much less pleasant experience on the go if you’re interested in reading all the text and learning the world’s lore.

What are the additional benefits of playing on the television?

In addition to sometimes having clearer text and displays, the Switch charges in docked mode when attached to a TV. Even newer-generation Switches rarely last more than a half-dozen hours before requiring a charge. Additionally, some games drain the Switch’s battery more than others and are best played in docked mode for that reason. The other solution, one which smartphone users long embraced, is a portable battery pack.

The Switch offers something for everyone. The selection below includes some of its stand-out offerings, but is far from an exhaustive list. The top Nintendo Switch games will be made with a particular player in mind. However, these games have certainly impressed a large swath of gamers already.

The Best Switch graphics for fantasy vistas: The Legend of Zelda: Breath of the Wild

Breath of the Wild launched with the Switch and nearly four years later is still lauded for its beauty. Amazon

A flagship series for Nintendo, The Legend of Zelda helped sell the Switch when it launched in 2017. Even in 2021, its graphics still impress. The expansive vistas and intricate boss designs set the tone for a fantasy adventure that players find highly addictive. Additionally, the ability to climb on nearly every surface in the game means that if a little mountaineering feels like it should go on the agenda, it can, giving the player an opportunity to appreciate a graphics style that is part anime, part fairy tale, and part coloring book. A truly beautiful game that you’ll want to play before the recently announced sequel hits shelves.

Harkening back to the sprite-based SNES and Genesis RPHs of the ’90s, but with beautiful modern twists, this feels like a game from futures past. Amazon

Japanese-style narrative-driven RPGs aren’t everyone’s cup of tea due to the long time requirements and often grindy gameplay, but those hours sure do go down smoother with a beautifully realized game world, as the Final Fantasy series has proven. Octopath Traveler, from the same game studio, Square Enix, offers old-school gameplay with close-to-traditional RPG battles and a pretty standard story, but the plot isn’t the only thing that is pretty. The sprites for both enemies and player characters are smooth and gorgeous, evoking a simpler gaming era, but with some wonderful scaling and twisting bells and whistles to keep them from seeming staid. Lighting and spell effects, focus shifts, and particularly the tapestry-esque hues employed in the game’s color palette become a character unto themselves. While the game is just as lovely in handheld, your big screen will really allow you to savor the details.

Luigi’s Mansion is an under-appreciated franchise for Nintendo, just as the taller, more slender Mario brother doesn’t get the love he deserves. While the puzzles and action of his franchise can be an acquired taste, there’s no question that the graphics taste delicious, like cloying, artificial fruit flavors in 2-percent milk. Luigi’s Mansion 3’s graphics style espouses the most cartoony elements of Nintendo’s Mario aesthetic, with characters being pushed and pulled by supernatural (and super-suction) forces. Incredible transition and transparency effects give the Scooby Doo-esque g-g-g-g-ghosts a really c-c-c-c-cool look. Best enjoyed sitting cross-legged on the floor in underoos, this is one of the best Mario games for Switch by being different from the rest.

A Singular Aesthetic With Wonder

A puzzle platformer that looks like your favorite storybook, Gris offers a short but unforgettable journey that lingers lovingly in the eyes. Amazon

The Nintendo Switch has been a boon to indie game developers. Tons of previously PC-bound titles made by small teams with shorter gameplay times have performed exceedingly well as download-only titles for the Switch. It has given gamers an alternative to Nintendo’s stream of AAA-budget dozens-of-hours-long mainline franchises. Gris rises above the rest with a moving picture-book design that may be the best Switch art to date. The story of a girl and her magical dress (but much more than that, to not spoil anything), Gris scales and moves like an animated film more than a videogame, with colors that are simultaneously luxurious, sad, and a little ominous. It’s the storybook combo that draws young and old alike to the works of Hans Christen Anderson, the Brothers Grimm, and the 1001 Arabian Nights. Of all the games in this list, Gris may be the one that is as enjoyable to watch as it is to play.

The Switch Proves It Can

A technical marvel considering the Switch’s processing power, Crysis Remaster shows what the hardware can do technically. Nintendo

Crysis started as a PC game whose requirements were so substantial that it achieved meme status. Even super-high-end PCs couldn’t run it at its maximum settings. When Crysis 2 was ported to the Xbox 360, it paled in comparison to the best PC versions—as console versions tend to do. The remaster of the original Crysis on Switch doesn’t quite pack the pure graphical power of other versions of the game, but it comes surprisingly close for a Switch game. If you really want to know what a Switch game can look like, and what graphics style best showcases raw power, Crysis Remastered is it. Best enjoyed on a big screen (as first-person shooters tend to be), it may be an indicator that there’s yet-untapped potential in the Switch’s versatility.

Q. What Nintendo Switch games should I buy?

The Legend of Zelda: Breath of the Wild is an easy purchase. Not only a beautiful game, it’s also one of the best-reviewed titles of the past decade. Super Mario Odyssey is another charming, cartoony game that features tight controls and fun power-ups, but enough challenges to feel like a real accomplishment when you complete 100 percent of it. Lastly, Hades is a newer indie rougelike that has been a phenomenon with PC players and Switch players alike. While the graphics aren’t so intricate as to demand TV viewing, the colors pop and the animation is silky smooth, complementing gameplay that is engrossing and rewarding. And it only costs $25.

Q. What Nintendo Switch Mario game is the best?

Super Mario Odyssey is an astoundingly fun continuation of the 3D Mario sub-series begun in the classic Mario 64 25 years ago. Bouncy music and large colorful characters expand and refine the Mario aesthetic, familiar and comforting as a warm hug. Precise controls and challenging content work for young and old alike. Not just top of the best Mario games for Switch, one of the best games on the system, period.

Q. What is Nintendo’s most popular game?

Two titles have dominated the Switch’s sales charts, outselling the rest of the field by more than 10 million units. Mario Kart 8 Deluxe, an updated version of the Wii U game, launched just a few weeks after the Switch and has sold over 35 million copies in the subsequent four years. The game gets maximum mileage out of both new and returning courses and has a wonderful sense of speed without ever feeling out of control. Animal Crossing: New Horizons launched at the beginning of the global pandemic and piled up more than 32 million units sold in just over a year. The cute, child’s-picture-book visuals and soothing slow-paced gameplay were a massage for the brains of a stressed-out planet. The simple but instantly memorable characters and their sweet-n-sassy personalities make playing the game feel like visiting friends.

The Switch’s home-or-handheld choice is often best left to the user and even access. While the Switch doesn’t push polygons like its competitors, it still manages to use innovative design choices to present graphic art that can astound, immerse, and enthrall. From sci-fi militaries to storybook dresses, elastic little brothers to high adventure, the Switch offers worlds that can go wherever you go, but can still offer a showstopping graphical experience on your home theater. If you’re looking for games for a slightly younger age group, consider some of the best Switch games for kids.