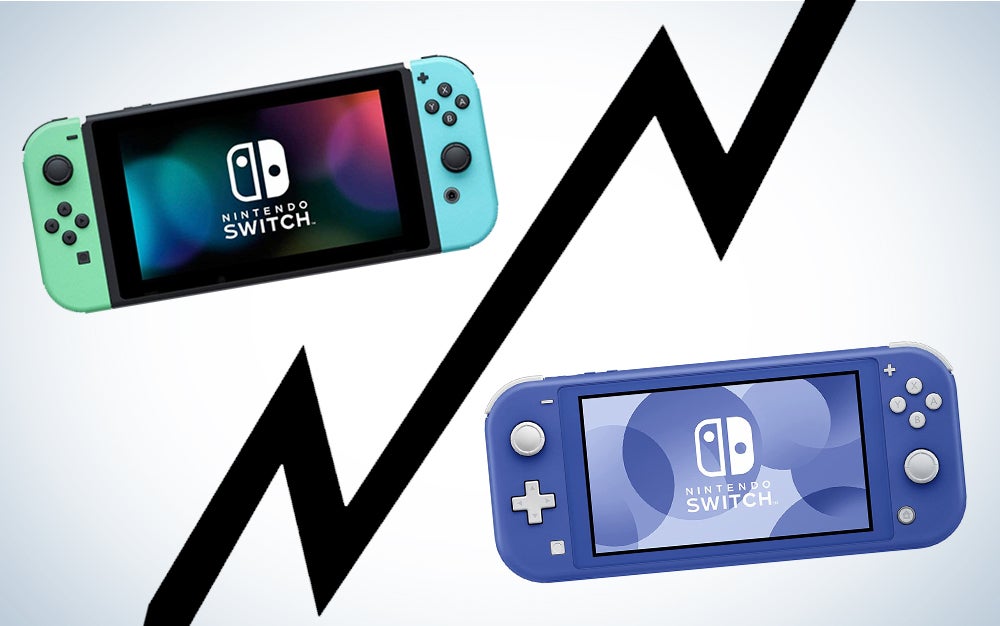 Nintendo Switch vs. Lite: Which of Nintendo’s handheld gaming consoles should you buy?

If you’re looking to pick up a new portable system, the only debate is Nintendo Switch vs. Switch Lite.

With the discontinuation of the PlayStation Vita in 2019 and its own 3DS in 2020, Nintendo’s Switch line of consoles became the only truly portable console on the market. While mobile games are currently thriving on smartphones and tablets, iOS and Android can only capture a fraction of the experience offered by Nintendo’s Switch. Classic, well-known game series like Super Mario Bros. and Mario Kart have mobile versions, but the options, pay structure, and smoothness of gameplay leave a lot to be desired for many gamers. Players looking for games with deep, Day-One content and dozens of hours of gameplay don’t consider the mobile vs. Switch debate, but rather the Nintendo Switch vs. Lite debate.

Nintendo Switch initially debuted way back in 2017. The Switch’s versatility sets its hardware apart from typical home-bound consoles like the Xbox Series X and the PS5. Plugged into a TV, the Switch acts like a typical gaming machine. Snap the JoyCon controllers onto the 6.2-inch LCD screen, however, and you can take the full Switch gaming experience out into the world. . Dozens of reskins of the base Nintendo Switch, focusing solely on aesthetics, emerged, but no hardware iterations appeared until the Nintendo Switch Lite was released in late 2019. The Lite is a pared-down Switch but with a 33-percent lower retail price and a slightly smaller 5.5-inch screen. The question for potential buyers is, of course, if what they lose is worth the $100 they save.

The Switch Lite isn’t so much an improved Switch, as it is a refocused Switch. Some might argue that Nintendo Switch vs. Lite isn’t a necessary debate, as they are for slightly different gaming populations. Ditching the versatility of the original, the Switch Lite is a single form-factor machine that can only be played as a portable system. The Switch Lite is aimed at cost-conscious casual gamers, rather than the core gaming fan. Its design skews younger, with a smaller screen and body, larger face buttons than the Switch’s JoyCon controllers, and generally more durable construction. As a result of the smaller screen and lower functionality, the Switch Lite battery life is longer than the original Switch model played in handheld mode. However, all the changes mean that the Switch Lite can only fulfill some of the functions that players desire.

Got it. Now what makes the original Nintendo Switch special?

The standard switch plugs into a larger television to enable gaming on the biggest screen in your house.The Switch Lite can’t do that. It’s handheld only.

When hooked up to a television, the Switch’s controllers slide off the screen and can slide into a plastic casing that allows them to function as a freely held controller. Additionally, these individual controller pieces, called JoyCons, have similar functions to the Wiimotes of Nintendo’s previous Wii controller, allowing for gesture-, tilt-, and point-based interactions with games. If you plan to buy Nintendo Switch games like the Just Dance series or Super Mario Party, they actually require these types of interactions to play.

As a handheld with JoyCons attached, the Nintendo Switch dimensions measure 9.5-inches long, 4-inches tall, and 0.5-inches thick. The Nintendo Switch screen size measures 6.2-inches diagonally with a resolution of 720p (1280×720), which is starting to feel a little paltry several years after the Switch release. The whole console weighs just under 1 pound. If desired, the Switch screen can stand up, detached from the JoyCons, and function as a small monitor for play, with multiple players using JoyCon segments or additional controllers to play multiplayer.

Nintendo Switch battery life depends on the game, with some being more taxing than others. Generally, a fully charged Nintendo Switch will play games for somewhere between 4.5 hours and 9 hours. A battery recharge takes about 3 hours and 30 minutes.

OK, so what’s missing from the Switch Lite?

First and foremost, the Lite cannot connect to a television—all play is bound to its 5.5-inch built-in screen. Because the controllers cannot be removed from the Switch Lite, games like 1-2-Switch, Just Dance and Super Mario Party are unplayable unless you wirelessly pair separately purchased JoyCons to the system. With no included kickstand and its small display, using the Switch Lite as a monitor for local multiplayer is extremely awkward compared to the more seamless experience of the Switch.

The Switch Lite only weighs roughly 10 ounces. The overall size of the system, except for depth, is also smaller, measuring 8.2-inches long and 3.6-inches high. This makes the Switch Lite easier to hold for smaller hands.

While the Nintendo Switch Lite battery life outperforms the original 2017 Switch model, the Nintendo Switch battery life of any Switch manufactured since late 2019 is improved as it features an updated battery with the play time listed above. The Switch Lite doesn’t quite measure up, lasting between 3 hours and 7 hours per charge, though the recharge time is 30 minutes faster than the base Switch, clocking in at only 3 hours.

Hmmm, so does anything make the Switch Lite better than the Switch?

There are some benefits to the Switch Lite despite the lost features. The most notable difference comes from the price. The Switch Lite retails for $200, $100 less than the Switch, which hasn’t had a price drop despite its advanced age. That $100 can purchase two big releases, or several indie games on the Switch’s online shop.

The Switch Lite’s smaller size makes it easier for smaller kids to play. The traditional Switch in handheld mode is one of the biggest handheld consoles of all time, and may ever feel slightly too big for some adults.

One of the biggest improvements of the Switch Lite is the directional pad on the left side of the screen, which replaces the left JoyCon’s directional buttons. The pad is far more responsive and comfortable than the buttons. It feels and plays like the pads from other handhelds in Nintendo’s history, such as the DS or the Game Boy Advance. Due to the single-unit construction of the Switch Lite with no removable parts, the whole machine feels much more solid and durable than the Switch, as well.

Aside from the need for additional JoyCon controllers to play a few motion-controlled games, the Switch Lite boosts the same amazing games library, from arguable Game of the Decade for the 2010s The Legend of Zelda: Breath of the Wild to indie darlings like Hades. The fidelity of the screen is just as good, even if the screen is smaller. The online functionality is unchanged, offering not only game downloads and online play (through WiFi) but also some entertainment and streaming apps like Netflix or YouTube.

I’m still not sure. Is the Nintendo Switch or Switch Lite right for me?

For the vast majority of gamers, the traditional $300 Nintendo Switch is the better choice simply because of its versatility. Even if you don’t plan to play Switch much on your home television, the fact that you can is paramount. Tabletop mode, with the Switch screen acting as a small monitor, is more useful than you would think if you’re interested in games like Super Smash Bros. Ultimate or Mario Kart 8 Deluxe.

The local multiplayer experience on a Switch Lite is demonstrably worse unless every player has their own console. Additionally, you don’t need to purchase an additional set of JoyCons, which would set you back $80, if you want to play motion-controlled titles. That purchase alone would nearly eat up the $100 savings that the Lite offers.

The one situation in which the Switch Lite is a clear-cut winner is if you are purchasing one to be used by a child or preteen. The smaller Switch Lite will fit their hands better, they may or may not have access to a television to play the Switch in their room (which is likely going to be their most common play space). The Switch Lite is slightly easier to pack and play on long car trips in the back seat, and if they’re prone to treat their belongings roughly, the Switch Lite is a bit more durable or, in the event of a disaster, cheaper to replace. Overall, the Switch console is an excellent gaming machine with a great library of titles. It has games for every age and predilection. But for most people, when it comes to the difference between Nintendo Switch and Nintendo Switch Lite, the lost elements simply aren’t worth the $100. Nine times out of 10, the traditional Switch will be the right choice. However, regardless of your choice in the great Nintendo Switch vs. Lite debate, you’ll enjoy the heck out of the machine.