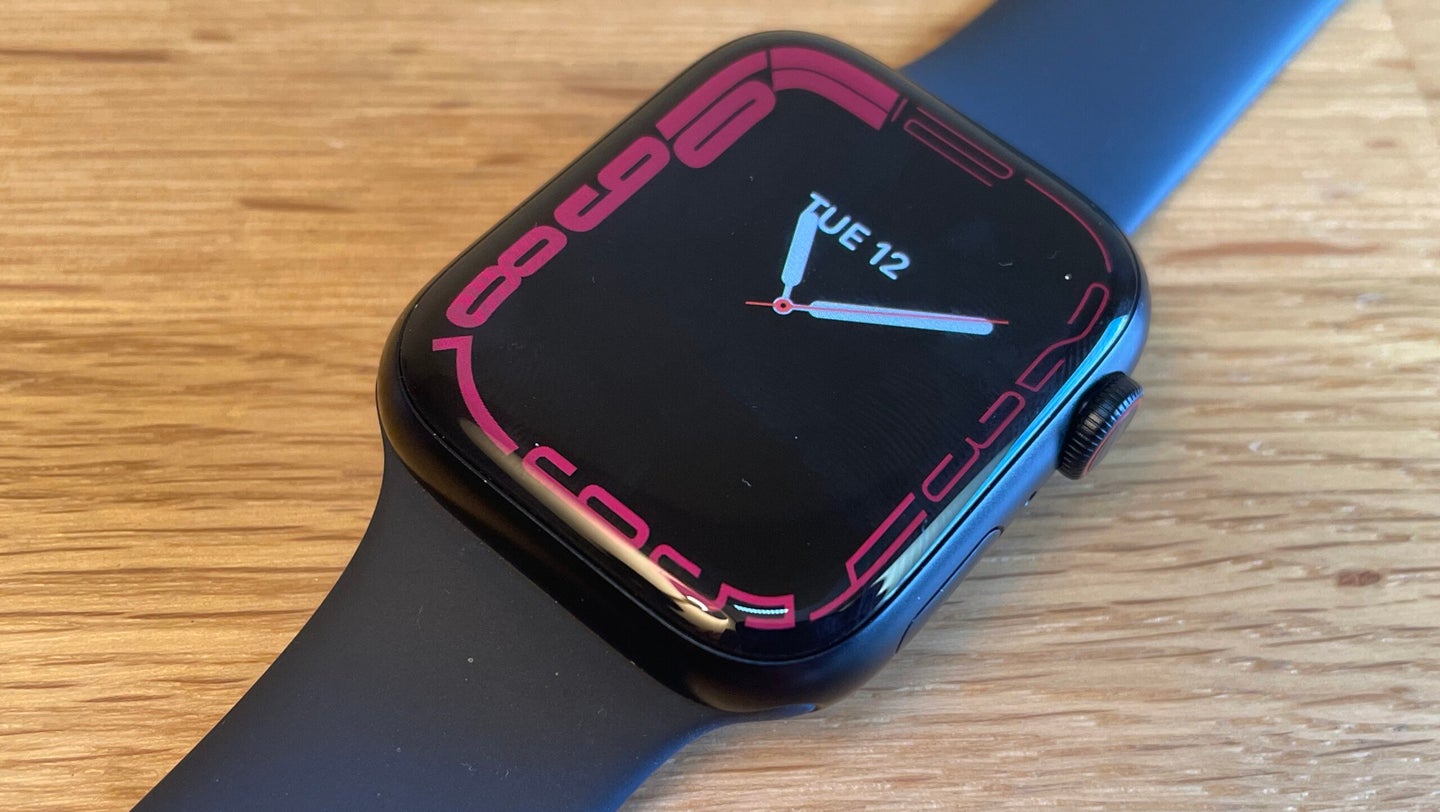 Compared to previous updates, the Apple Watch 7 is a one-trick pony. It has a larger display that, when combined with other screen-related tweaks, makes for easier viewing, whether you’re directly engaging with the watch or checking it at a glance. There are myriad mini upgrades sprinkled throughout, like slightly improved charging, but the Series 7’s particular value comes squarely down to the screen. And yet, that seemingly superficial change has a cascading effect that improves the basic functions of the tried-and-true Apple Watch experience. While the Apple Watch Series 7 changes very little, that change feels luxurious. The bigger screen is the whipped cream and cherry on top of what is already the best smartwatch.

What’s New About the Apple Watch 7?

Did I mention the screen is bigger?

Fine. Tell me about the screen.

Numbers aside, it is a tangible difference to the naked eye. The Apple Watch Series 7 display almost completely fills the top face of the watch. Pictures, from watch faces to photos from your iPhone’s camera roll, feel bigger and fuller. Across Apple’s many first-party Watch apps, the buttons are bigger and the text appears conveniently larger.

The larger UI enabled by the larger screen improves the Apple Watch experience in subtle, but substantial ways. With more display real estate, you have the space to use larger fonts, which makes text easier to read without bringing the watch close to your face. Playing to this, the 45mm Series 7 model features three new, larger text fonts. (The 41mm Series 7 and 44mm versions of older watchOS 8-compatible models also get the smallest of the three new text sizes.) Even if you don’t use the new XL text, the bigger screen will compel you to use a bigger text size, and the combination of the two makes checking notifications and text messages quicker, easier, and less conspicuous.

Likewise, buttons are easier to tap precisely. This is somewhat useful in the control center and calculator, but most clearly in the Series 7’s new QWERTY keyboard feature. The Watch keyboard is still too small to be practical, even with swipe typing—I never stopped going to my phone to text—but it is possible to swipe or peck out a message with minimal mistyping. That has never been feasible on older versions of the watch.

In addition to the extra real estate, the screen has gotten a more general visual tune-up. The corners of the watch face are now rounded. Using a trick of the eye, the new, thicker front glass over the display makes the screen appear to be curved at the edges. As a result, the display looks softer and feels more polished. For a moment, I thought the curves might lead to better viewing angles when looking at the watch face at an angle, but it’s really just an aesthetic improvement. That said, having gone from Series 6 to the Series 7, then back again, I absolutely prefer the new screen, both for its style and substance.

A secondary addition, the watch face is also brighter in its passive, “wrist down” state, which makes it substantially easier to look down and check the time and/or your notifications without bringing the watch to your nose. Even with the larger text, I couldn’t really read a notification with the watch at my hip, but that may be my eyes as much as it is the watch.

So…What does the Apple Watch do again?

Despite the fact that the Apple Watch Series 7 doesn’t do anything new, per se, it is still a novel product to a lot of people. In an earnings call earlier this year, Apple said that “nearly 75 percent” of Apple Watch buyers are getting their first one. Assuming that figure doesn’t change rapidly, there’s a good chance that you’re weighing the pros and cons of the Apple Watch in general, rather than its upgrade potential.

The Apple Watch is a weirdly amazing little upgrade to the iPhone experience and, to a lesser extent, for Mac users. Like almost all smartwatches, its primary draw stems from health and fitness features. The Apple Watch tracks your steps and exercise, giving you feedback and attempting to spur you into a more active lifestyle. Apple’s also added a premium fitness service, Apple Fitness+, which offers guided workouts for many types of exercise. With every entry, Apple adds new health and fitness features. Sometimes, those features are groundbreaking, like when Apple added the ability to take an electrocardiogram with the Apple Watch Series 4. This year’s new fitness-based improvements are the smallest yet. WatchOS 8 enables a few new workout types and improved support for bike-based workouts, but that’s about it.

The Apple Watch, across all models, stands apart from other smartwatches and fitness trackers because of all the other things it can do. When you really boil it down, the watch serves as an extension of your iPhone that allows you to engage with its many demands on your time without actually pulling it out. The Apple Watch Series 7 still lets you do so many of those quick little things you do with your phone even quicker. But it doesn’t really do any new things. The closest, as I mentioned, is the QWERTY keyboard, which isn’t effective enough to replace pulling out your phone.

And yet, in 2021, it is still the most effective smartwatch for anything other than fitness. Yes, the Series 7 still delivers emails, texts, Slack messages, and other notifications at a glance. You can still use Siri. (I primarily ask it to set timers). You can still take phone calls. You can still use it to open your iPhone or macOS computer. It still does all these things in a more intuitive way than other smartwatches, which tend to have confusing interfaces that are hard to navigate.

What else is new on Apple Watch 7?

There’s also a grab bag of other small upgrades to the Apple Watch’s durability in the Series 7. The front crystal is now 50-percent thicker and redesigned to generally make it harder to crack than its predecessor. It has also been rated IP6X dust-resistant, so it’s less likely to break if you wear it at the beach or in another highly dusty situation.

The Apple Watch 7 now comes with a fast-charging cable that enables speedier charging. According to Apple, it can charge from 0 percent to 80 percent battery in 45 minutes, versus 60 minutes for the Series 6. The faster charging specifically speaks to users who want to wear the watch to bed rather than charge overnight: An eight-minute charge should provide enough juice for 8 hours of sleep tracking, by Apple’s count.

Obviously, these are very specific optimizations: In practice, I found that charging from 13 percent to 80 percent took about 35 minutes, in line with Apple’s projections, but getting to 100 percent took just over an hour, which isn’t as meaningful a jump. Also, it’s worth noting that faster charging only applies if you use the new cable that comes with the watch. People who use third-party chargers won’t see a difference.

The Series 7 features the same 18-hour battery life as the last couple of models. On a full charge, the watch tends to last through just under two days of normal use, so you will need to find a time to charge it during the day if you use the watch for sleep tracking.

In addition to the changes to the Apple Watch Series 7 hardware, Apple has released a wide assortment of changes to the Apple Watch via the latest version of its operating system, watchOS 8. While many of these changes were made with the Series 7’s new screen in mind, including ones we’ve already discussed like the QWERTY keyboards and larger text options, many of them aren’t actually exclusive to the new watch.

There are a handful of new watch faces designed to take advantage of the larger screen, including two made exclusively for the Apple Watch Series 7. The first is Contour, a classic watch face that offers big numbers that hug the edge of the screen and grow to highlight the current time. The second face, Modular Duo, lets you put two tracking features, such as your fitness goals, heart rate, or a world clock, on the watch face for easy access. There are also some faces that work better on an Apple Watch 7, but aren’t exclusive, like the very busy World Clock watch face that lets you see the time in 24 time zones at once.

The home and photo library apps have received visual overhauls that make them easier to read. The stress-release-focused “breathe” function is now a full-blown app called “mindfulness,” which expands on the concept with more detailed instructions and a visualizer. There are new trackable workout types, Tai Chi and Pilates. The Apple Watch can now also detect and automatically start a bike-based workout.

These are just a few highlights. There are lots of little changes sprinkled throughout watchOS 8 that change every compatible version of the Apple Watch (Apple Watch Series 3 and up). For the most part, those changes seem to be practical improvements, though often in small ways that wouldn’t affect whether or not you’d be interested in buying one.

One more thing. We should talk about all the different versions of the Apple Watch Series 7 you can buy because there are a lot more of them than there used to be.

First of all, as always, the Apple Watch Series 7 comes in two sizes—41mm and 45mm. Both sizes receive similar upgrades in screen size relative to their 40mm and 44mm predecessors, but since “bigger is better” is this year’s theme, I’d strongly recommend the larger version if your wrist can accommodate it. The 41mm model starts at $399.99, and the 45mm model starts at $429.99.

Also returning is the option to buy a more expensive version with cellular support, allowing the watch to remain fully functional even when not connected to the same home network as your iPhone. The cellular 41mm model starts at $499, and the 45mm cellular model starts at $529.99.

There’s also a wide range of new bands in different colors. That said, the Apple Watch Series 7 uses the same clasp mechanism as past Apple Watches, so all older bands will work with the new watch and it’s very easy to swap among multiple bands if you want to change them out for different use-cases or outfits.

Who should buy the Apple Watch 7?

To my mind, the Apple Watch is still a unique product. Its combination of fitness and lifestyle features make it the best overall device to have on your wrist, assuming you use an iPhone. Yes, the Series 7 is a comparatively minor variation on the theme but, like the Apple Watch itself, that variation is a worthy luxury in conjunction with the upgrades of the past couple models.

That said, if you can get a new or refurbished Apple Watch Series 6 from a retailer at a reduced price, you’ll get 90 percent of the Apple Watch 7 experience. While the screen is compelling once you try it, the Apple Watch doesn’t necessarily warrant routine upgrades, even for technophiles. Moreover, this particular model doesn’t have a new feature that would warrant getting rid of the one you have. And, obviously, I wouldn’t recommend anyone with an Apple Watch Series 5 or Series 6 upgrade this year.