Hands-On: OnLive’s Mobile App Gives Your iPad the Power of a Gaming PC

OnLive now beams some of the best games out there, from Batman: Arkham City to L.A. Noire, right to your tablet or smartphone 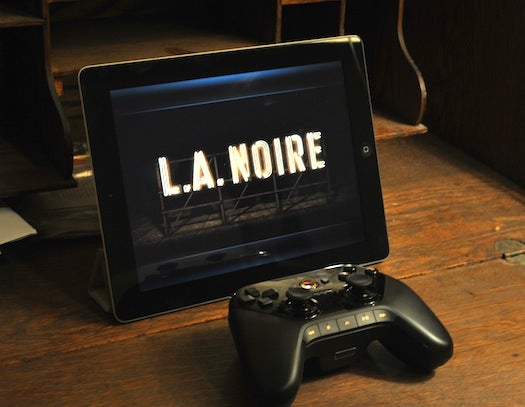 OnLive has been around for a little while now, but it’s no less improbable than it was when it was announced (at which time some gaming blogs called it a technically impossible scam): a service that streams full games, from major publishers, right to your TV or computer, no console necessary. This week, the company will release mobile apps for smartphones and tablets. Let me say that again, in case you don’t realize how bonkers this is: You can now play Batman: Arkham Asylum, a demanding and graphically intense game, on your iPad. And it works.

OnLive’s new mobile app is available for iPad, Honeycomb tablets (like the Motorola Xoom), the Kindle Fire, and Android smartphones. You get access to the full OnLive catalogue (more on what that means below), and some games are specially redesigned to take advantage of the new capabilities afforded by tablets and smartphones, namely touch. It’ll all be released sometime on December 8th.

This is insane, you guys. When it works, it works just the way it’s supposed to. You really can play full console and PC games on an iPad (my test device). When you have a fast enough internet connection, video quality ranges from adequate to excellent. The fact that you’re streaming means there’s never any downloading at all–you press “play,” and boom, you’re playing the game. Games also start up super quickly, with hardly any loading or waiting times at all. Saving works nicely–games are saved properly, without you having to really worry about whether it’ll be saved. And you can pick up and continue your game from whatever device you want.

The controller is also great–nicely weighted, not slippery or cheap-feeling at all, and it automatically connects to whatever gadget you’re using, usually by Bluetooth. It costs $50, which is pretty reasonable and, I would say, an essential purchase if you plan on using mobile OnLive.

The “What’s Bad” section is going to be longer than this section, because it does have problems, but also because what’s good about it is so simple that there’s not really a ton to say about it. You can play PS3 games on your iPad. It’s crazy.

There are times when it doesn’t work. My home internet connection, which ranges from around 10 to 12 Mbps, was mostly up to the task, but if your connection dips below 5 Mbps, games almost become unplayable. There’s some kind of dynamic resolution shift, like Netflix uses, to lower the quality of the video as your bandwidth drops to maintain smoothness. But the thing is, it doesn’t selectively change the resolution, so stuff like text and menus, even OnLive’s own menus, can quickly become unreadable. I also noticed a lag when I was using a slower connection, which is basically unacceptable for gamers. And even on my decent-to-pretty-good home connection, sometimes OnLive would have trouble maintaining a high resolution, for no reason I could tell.

Video quality relies on both your internet speed and your latency, or the distance you are from one of OnLive’s three major server centers. From my apartment in Brooklyn, the closest server is in the D.C. area–not too far away. There’s also one in Dallas and one in the Bay Area, so folks in not-so-weird places like South Florida, Wisconsin, and Minnesota may have a much harder time than I did.

This is a basically inscrutable and ludicrously complex thing OnLive has done, so every once in awhile, something weird will happen, like when my screen in L.A. Noire suddenly went black and forced me to restart the app. Or when Lego Harry Potter: Years 5-7 developed an unusable lag (also fixed with a restart). Or when Batman: Arkham City tried to explain how to get Bruce Wayne to fight, but gave me the keyboard controls rather than the controller’s, leaving me to stare at the controller trying to figure out where the “D” button was (it doesn’t exist). The controller problem popped up in L.A. Noire, too, where I had to experimentally push every button to figure out how to do something because the on-screen instructions were not tailored to the way I was playing. I’m using the app in prerelease, so I won’t make any judgment about how it’ll function in the long run, but I do hope it’ll be more reliable.

Oh, and there’s no vibrate function on the controller when used with the iPad. That’s troublesome for certain games, like L.A. Noire, which doesn’t exactly require vibration but which makes a lot more sense with it. And you can’t buy games from within the iPad version, due to Apple’s weird rules about in-app purchasing. (This does not hold true for Android devices like smartphones, Honeycomb tablets, or the Kindle Fire.)

I didn’t get a chance to try OnLive on a mobile (3G or 4G) connection. OnLive says that a smartphone connection can get by with a slower connection, around 2 Mbps, which is about average, or a little higher than average, for 3G in well-serviced areas. I am dubious about this. But 4G–4G LTE, not that HSPA+ nonsense AT&T is pushing–should be perfect, and actually a pretty great showcase for what LTE can do.

The Catalogue: The list of available games is limited. This isn’t like Netflix, where the idea is to provide you with access to everything, from every channel; OnLive said more than once that they think of their system as a platform just like the PS3 or Xbox 360. So they won’t have every game, and they certainly won’t get any first-party games from, say, Nintendo. That’s a nice explanation, though it also means they may never get any blockbuster first-party games–who’s going to make exclusives for them?

And the catalogue is weak for now. There are some top-tier games, for sure, and OnLive is fully aware that this is their main weakness, but in a given week, OnLive will have maybe half of the top ten third-party games. At the moment the catalogue has less than 200 games, and only a handful of those are big name games. OnLive has been pushing in the past few months to get more and bigger games, so I think/hope we’ll see the catalogue growing fairly quickly from here on out.

The app is free. Games cost the same no matter what platform you play them on, be it Xbox 360 or OnLive, which means new games cost around $50. You can also rent games for a three- or five-day period for much cheaper–the former costs $6, and the latter $9. Or you can spring for a subscription, which costs $10 per month, gives you access to lots of older games for free, and cuts the price of new games (basically, the games you want) by 30%.

I should also say that I consider the controller to be a must-purchase, at $50, and some sort of stand is definitely necessary for the iPad (that magnetic cover thing for the iPad 2 works just fine in its “upright” mode).

OnLive isn’t perfect, and if it was a less ambitious service, I wouldn’t be so inclined to forgive it. But the thing is, it’s just about the most ambitious idea in gaming I’ve ever heard, and the fact that most of the time it delivers on the promise of hardware-agnostic high-end gaming is enough that I’m really excited about it. It’s hard to explain how amazing it is to start up a game like L.A. Noire on an iPad: you get one of those cognitive dissonances, like “this is a thing which should not exist.” And yet it does!

Yeah, you need a reliable, fast internet connection. But if you, say, travel a lot, and stay in hotels with decent internet? Congratulations, you and your iPad can now play some great games all by yourselves. Awesome.