And it will be semi-portable 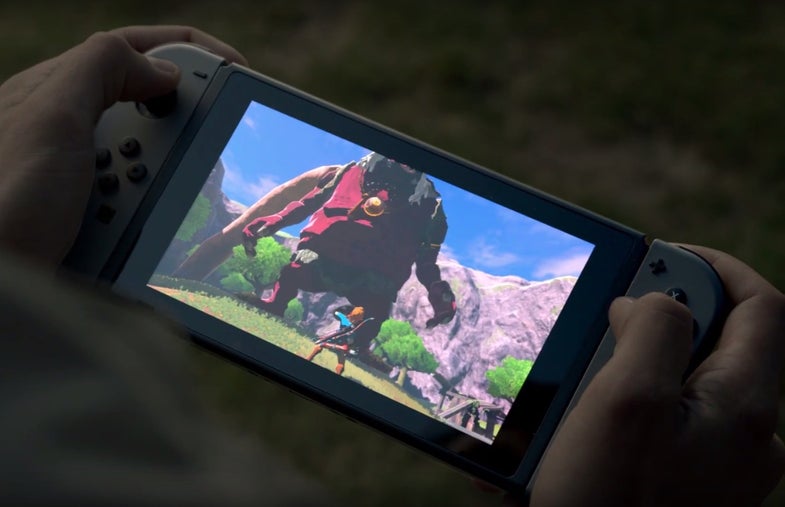 The Nintendo NX may not have a release date, but it finally has a name: Nintendo Switch.

Nintendo has teased its upcoming console, codenamed “NX,” for over a year. With the release of a new trailer, we finally know it’s a home console with a docking station that allows gamers to bring the hardware with them for on-the-go playtime. Hence the moniker “Switch.”

When docked, the Nintendo Switch will connect to the TV to allow gamers to play from their couch on the biggest screen in their house. Should gamers need to leave home, the Switch can be undocked and used wirelessly. Presumably the (included?) dock charges the console to offer optimal battery life upon making an exit.

There are still question marks surrounding what to expect from the console formerly known as NX. There’s a chance that the Switch home console is separate from the portable screen we see players take with them in the trailer–meaning the console would connect to WiFi or cellular and stream games to the portable portion. More details are bound to emerge in the time leading up to the Nintendo Switch release date.

The Nintendo console trailer also leaves out mention of internal technical specifications (update: aside from an NVIDIA Tegra “custom” processor, the specs of which remain unannounced.). The gaming device is presumably as powerful as a Playstation 4 and Xbox One, if not more, but there’s currently no way to tell. If the console will release sometime later this year or next year, the inclusion of 4K and HDR can be assumed (at least one would hope).

Other questions marks include whether the console will support the popular Street Pass feature of Nintendo’s current handheld, the 3DS. Street Pass, when WiFi is left on, allows players carrying their 3DS to trade game data, ID info, and other small bits of information with other 3DS players carrying their system. Opening up your 3DS to reveal who you’ve passed can lead to hidden game modes and mini games within your 3DS, even when passersby aren’t present.

In addition, will it support Nintendo’s current perplexing array of controller options? For Nintendo’s current home console option, gamers can control games using the Wii U Gamepad, the Wii U Pro Controller, the Wii Remote (paired or not paired with the Wii Remote Nunchuk) or the Wii Classic Controller. Not to mention game-specific controllers like, for example, the GameCube controller and adapter to be used with Super Smash Bros 4. A complex list to keep track of, especially when no one controller works with every game playable on a Wii U console. Also disappointing was the fact that not a single controller listed was present in the Nintendo Switch Trailer, leading to suspicions about backwards compatibility.

Instead, the Nintendo Switch works with what the company is calling Joy-Con controllers. According to a press release sent out by Nintendo,

Looming questions aside, the Nintnedo Switch so far looks to be a worthy followup to the Nintendo Wii U–a console the father of Super Mario deemed a failure. No mention of when we may hear more details, but Nintendo could offer fans more soon.