All gamers should take note, no matter your allegiance 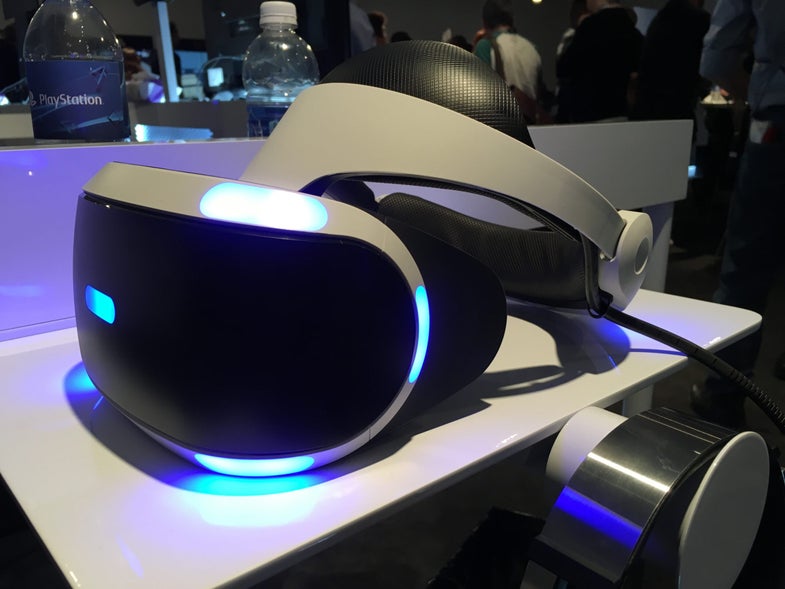 The Playstation VR will be released in the first half of 2016—important information if you’re even the slightest fan of video games.

There’s been much said about virtual reality being the next big step for gaming, but there’s only one console-maker that’s doubling down on the technology. With Microsoft focusing on augmented reality with their HoloLens, and Nintendo’s NX console being kept under wraps, Sony will likely be the first to bring their fans fully immersive gaming. Which is big news no matter what kind of “fanboi” you are.

Playstation VR—formerly known as Project Morpheus (for obvious reasons)—will bring similar tech that we’ve seen in Facebook’s Oculus Rift and HTC Vive to Sony’s gaming platform. Game demos on almost every virtual reality headset option have proven the technology’s usefulness in regards to immersive gaming. But those other VR headsets require a computer to drive them. In Sony’s case, having a headset that can tightly integrate with a console it was made for–and with first-party titles all created by one company–is a big deal.

For the uninitiated, Playstation VR—like many other virtual reality experiences—simply puts the screen on your head, in front of your face, and uses motion-sensing to detect where you’re looking. A simple trick in theory, but by removing any view of the outside world and putting sole attention on the screen players are fully surrounded by the world of the game. Coupled with the addition of what Sony’s calling 3D Audio, throwing headphones into the mix immerses gamers even further.

“The biggest thing that VR gives you is the feeling of presence,” Richard Marks—senior director of software engineering for Sony—tells Popular Science at Playstation Experience 2015. “You feel like you’re in a different place and [games] make use of that. Two major things are different with VR: you get a very good sense of scale and a very good sense of space. Having things get near you [for example] is very different in VR, and very powerful. You don’t get the same kind of feeling when you’re looking at a screen.”

Marks’ comments hold up in just about any VR experience—not just ones on the Playstation. When I played Portal on the HTC Vive, having the ground crumble beneath me was terrifying. Over at PSX 2015, sitting in the cockpit of a space fighter in Eve Valkyrie felt like all my dreams were coming true. But Marks’ remarks hold up even when playing a game like Super Hyper Cube—a simple puzzle game that is fairly basic on paper. When played in VR, the block arranging mechanic is joined by the ability to zoom through space and turn around to view completed levels behind you. Puzzle titles that incorporate rearranging blocks have existed for the past 30 years, but presenting players with a giant floating one in front of them allows them to get up close and personal with the puzzle at hand. Space: check. Scale: check.

The headset works as well as you’d expect, but getting fully thrown into the world of the game happens when you put on the headphones. Like rival companies’ VR solutions, Playstation VR entirely cuts off sight and sound to ensure gamers feel like they’re somewhere else. The difference is Sony is bringing the console experience to a quality virtual reality headset—first-party titles and one configuration setup to both make the lives of developers easy and offer gamers the best experience possible.

Sony’s racing title puts you in the drivers seat–up close and personal.

Video games are not the only use for virtual reality. Oculus was purchased by Facebook likely because Zuckerberg knows, like many, VR’s potential in sharing content to be experienced up-close–in 360-degree videos, for example. Samsung recently launched their Gear VR which, along with gaming, allows you to browse the web in virtual space. And movies directed and shot for virtual reality almost seem like a no-brainer.

But Sony is the first game console creator to openly dive into virtual reality (you know, after VR finally got good–sorry Virtual Boy). In a world where Nintendo popularized the vibrating-controller with the Rumble Pak and Microsoft showed us the true meaning of a quality online experience with Xbox Live, Sony now has the opportunity to really push forward the idea of what it means to be a modern-day gaming console. It’s important to note that first does not always mean best, but it will almost definitely provide the pressure needed for rival companies to really perfect VR gaming. And even if first is the worst, Playstation VR’s initial attempt isn’t half bad.