5 Details About Nintendo Switch That Weren’t In The Trailer

Nintendo’s 2017 console will support Amiibo, but not Wii U or 3DS games 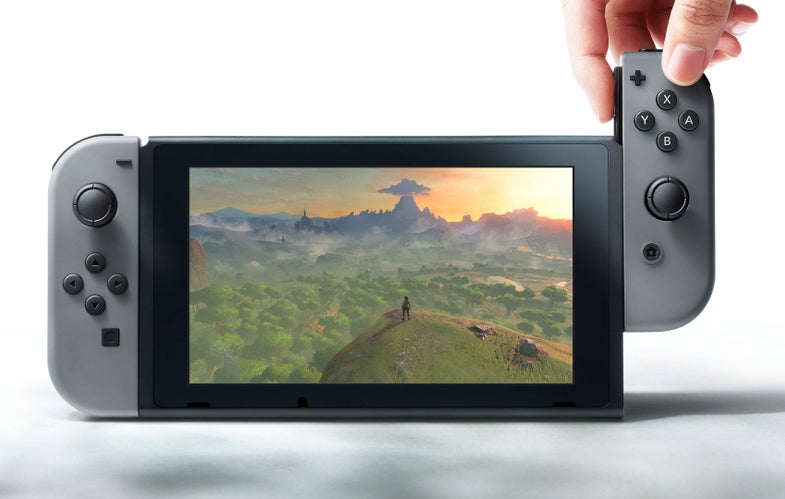 The details of Nintendo NX, which the Japanese gaming giant has kept fans on the edge of their seats for, has finally been revealed: Now called the the Nintendo Switch, the home console/portable console hybrid is coming to store shelves in March 2017.

Yesterday’s trailer gave us long awaited details about the Nintendo Switch, which is thought to be the successor to the highly popular Wii U, though perhaps it raised even more questions than answers.

Since releasing the trailer, Nintendo has clarified some of these questions. Here are a few more crucial details we found out:

The Nintendo Switch Dock Is Only For Charging And TV Output

Many of those watching the trailer may have wondered, as we did, if the docking unit that the portable portion of the console was put into had extra processors, like RAM or other internals to beef up the Switch when it came time to play on the television. Nintendo tells IGN that this isn’t the case. According to the gaming site:

Few have gotten hands-on time with the Nintendo Switch. But it’s likely that playing the console on-the-go will provide a largely similar experience to what you’d get when playing on your television at home.

Nintendo is famous for including support for games belonging to the previous generation of consoles. More often than not, games bought for a current Nintendo system will work on the next one to allow gamers to play all their favorite games. This will not be the case for the Nintendo Switch.

According to Desctructoid, the console will not support Nintendo Wii U game disks nor Nintendo 3DS game cartridges. Those looking to play their old favorite games may have to re-purchase. Nintendo says there is a possibility that old games will be released for the Switch once again on the company’s e-Shop as digital purchases.

The Controllers Are Called The Joy-Con, And We Could See Peripherals For It

Part of the Nintendo Switch’s unique console design stems from the removable controllers on the side of the unit. The two sides of the portable unit can be removed and attached to a controller-shaped charging pad, allowing for couch gameplay. Nintendo has named them the Joy-Con (Joy-Con L and Joy-Con R, to be specific).

In the video footage of the Nintendo Switch we can see the two being used in tandem when playing solo, but a Joy-Con controller can be shared with a friend for multiplayer gaming. Or, considering Nintendo’s love of a myriad of controllers, we could see the company release peripherals for the Switch depending on the game one’s playing, as is depicted in the artist mockup by @ryansalamanda on Twitter.

What Other Game Companies Are Onboard?

The Nintendo Switch trailer gave us a glimpse of NBA 2K17 and Skyrim on the new Nintendo system. But there are other non-Nintendo games that will join Mario, Link, and Pikachu on the new console. Games from Sega, Activision, EA, Capcom and more will also make their way to Nintendo’s new device. It remains to be seen whether or not the non-Nintendo titles will arrive on or around the same day as the release of the Playstation and Xbox counterparts, or if the games will look as good graphically as on rival game consoles. Here’s the full list:

The hype surrounding Nintendo’s amiibo may never die down. The NFC-enabled figurines allow gamers to fight against specific characters, unlock certain gameplay modes and more will continue to be supported in Nintendo’s Switch console. Which makes sense, if only considering the upcoming Zelda game, Breath of the Wild, and the accompanying amiibo that will be launched in honor of its release.

There’s still quite a bit we don’t know about the Nintendo Switch. What are its internal specs, for example, or what games will the console launch with? Nintendo has made clear, however, that we will not be getting any more details about the console until 2017. Fans of Nintendo’s games and consoles will have to stick with the Wii U and 3DS until then.