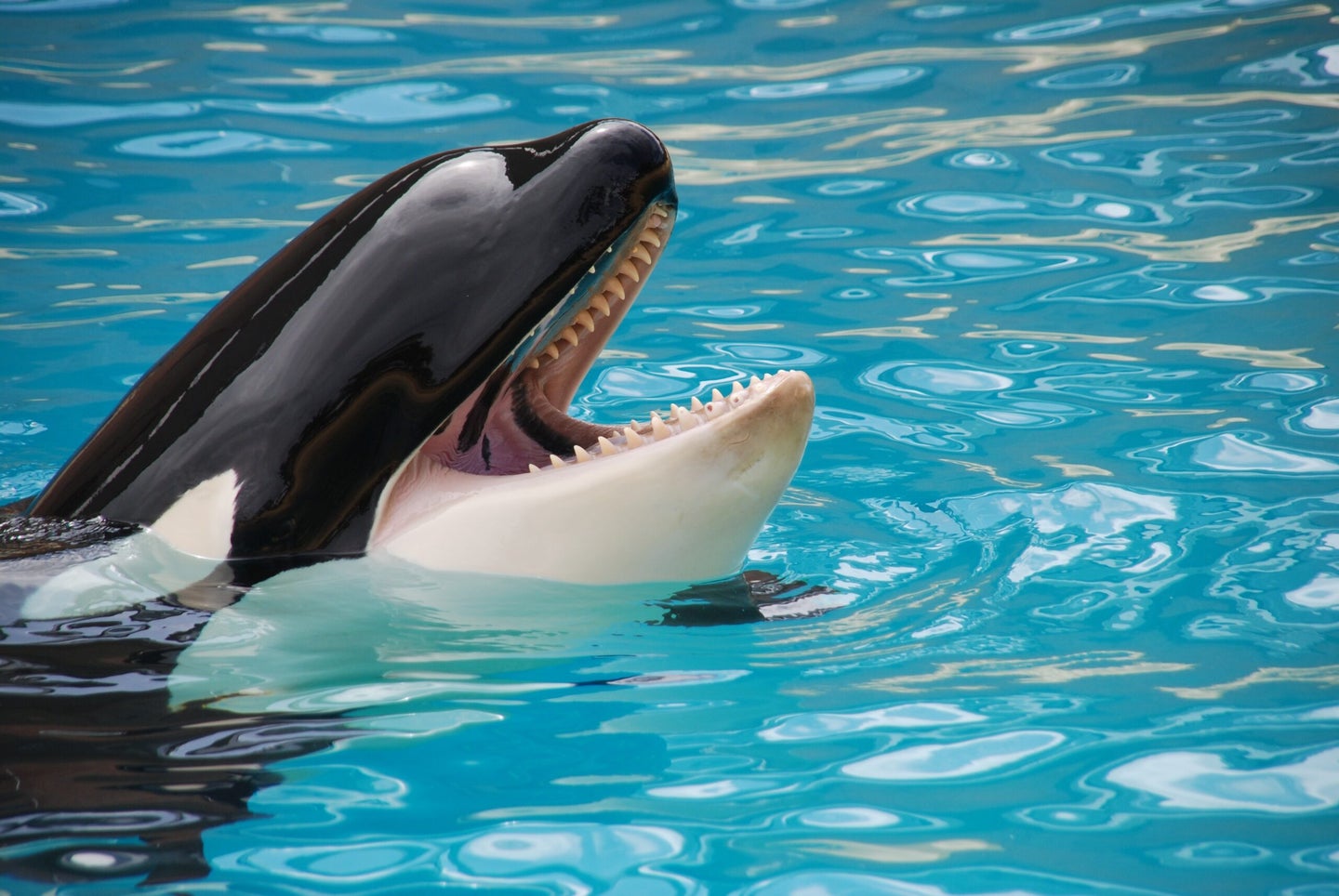 Wikie the killer whale shouldn’t know how to say “Amy.” English isn’t exactly her first language, and the “em” sound is challenging when you’re speaking through your nose and a pair of vibrating membranes. And yet, Wikie’s trainers taught her to say it.

This isn’t just hubris on the part of some chick named Amy, and it isn’t a stunt to wow audiences or lull unwitting journalists into covering a research paper. It’s part of a completely legitimate effort to decode whatever form of language cetaceans like Wikie might use.

The problem with understanding animal language and communication—and this will seem obvious in retrospect—is that we don’t know what’s going on in animal brains. A farmer can teach his border collie to understand and follow hundreds of commands, and it can appear as if the dog comprehends what “go find the blue toy” means. But we don’t know at what level the canine understands. We just know that the dog can ultimately respond by retrieving the right toy. Researchers think dogs comprehend bits of human language more complicated than single words, but we can’t actually know how a collie processes each of those sounds. We don’t even really know what it feels like to be inside a dog’s head.

It’s the same with orcas, dolphins, and African grey parrots, except those creatures seem to grasp even more language than dogs. What’s more, they mimic.

Most animals lack the physiological structures needed to make human sounds. We have vocal cords (and unusually good control over them) and most other animals don’t. Orcas and dolphins both whistle to communicate, so human speech is a stretch. But researchers who study animal communication need to push those boundaries to understand how other creatures learn and speak. Or, as dolphin expert Diana Reiss puts it, they’re important questions to ask “if you’re interested in not just what an animal does, but what it can do.”

If all Reiss ever did was observe dolphins in the wild, she would learn a lot about dolphin behavior. But she wouldn’t be able to ask more probing questions about how dolphins can learn, and what kind of associations they make with words and sounds. In the lab, she’s able to dig deeper.

The purpose of teaching an animal some English words isn’t to make it speak our language. It’s more about understanding how an animal learns when confronted with something totally unfamiliar. We already know that orcas can learn orca sounds by mimicking each other. Now we’re interested in figuring out how an orca might learn a more foreign sound—like the word “Amy”—and what it can do with that new information. Can it associate the sound with a person? Can it use the sound to request Amy herself? It’s only by pushing these boundaries that scientists can begin to understand the extent of a killer whale’s intellectual capabilities.

In the study on Wikie, which was published on Wednesday in Proceedings of the Royal Society B, the researchers were specifically telling the 14-year-old orca to copy sounds. Experts already knew killer whales could imitate noises, because that’s how they learn from each other. Now they needed to figure out whether orcas can extend that concept of “copying” to something unfamiliar—like a human voice. The answer was a resounding “YES.” Wikie learned new words almost immediately, especially when the sounds were easy to produce. She picked up several of them on the first try.

And Wikie’s not the only one. Other animals also mimic human speech.

Escaped parrots in Florida, for example, have taught wild birds how to say curse words picked up from their former human owners. Researchers studying a beluga whale kept hearing a person singing underwater, but it turned out to just be their cetacean subject, presumably repeating bits of songs it heard the humans singing. Another beluga learned how to say “get out of the water,” which caused great confusion when divers kept thinking their colleagues were telling them to surface.

A famous Boston harbor seal named Hoover started making sounds like a drunk guy yelling because hey, it’s Boston. This was back in the ‘80s, and it seems that men would get drunk, go down to the harbor, and yell at the seals. Hoover was like a baby repeating that curse word you didn’t mean to say in front of him—he was just copying you.

And plenty of other animals don’t just mimic human sounds, they have their own meaningful “words,” too. Vervet monkeys use specific calls to notify each other of leopards, snakes, or eagles, each of which prompts a different escape response. Ground squirrels have similar alarm signals, as do prairie dogs and meerkats.

Some birds do too, though that’s distinct from something like a mating song. Both convey meaning, but the mating song is probably attractive the way we might find a man’s voice or a women’s scent appealing. It’s an interpersonal communication. An alarm call is referential, meaning it refers to something in the external world and provides information about that thing. Mating calls just provide information about the singer.

These creatures all depend on communication to survive. Orcas and dolphins just take it one step further, and humans one step further than that. But it all often starts with basic imitation.

Human babies do it. You give them a truck, say the word “truck,” and eventually they’ll start repeating it back to you. Soon they’ll repeat it to themselves while playing, or say “truck” to request the toy. Dolphins do exactly the same thing. When Reiss gave dolphins a kind of keyboard with symbols for things like “ball” that played a particular whistle sound for each item, the animals didn’t even need training to use it. They started hitting keys, and when trainers tossed in a ball at the “ball” whistle, the dolphins realized they could make that sound themselves to request the toy. They even started repeating the whistle to themselves as they played with the object.

The keyboard, Reiss says, “acted as a Rosetta Stone.” It was a little window into how dolphins learn a new term for something, and how they can incorporate that knowledge into their lives. It taught the researchers what dolphins do if they’re given control and choices. That, in turn, informs us about their overall capacity for learning and understanding.

Eventually, humans learn to fit the word “ball” into a broader language construct. Balls become a category of item with a certain shape and purpose, not just one specific round thing, and we can combine that word with others to form sentences and ideas. We’re not sure whether any other animals really do this. But that’s not to say they don’t communicate—just that we can’t yet peer into their minds.

Reiss has a great example. The dolphins she studies make a particular noise that researchers call “the thunk,” and it’s always executed by parents in the context of disciplining their kids. Reiss says they can observe the behavioral effects—it gets the young dolphins to attend to whatever the adults are doing—but that doesn’t mean researchers understand what it really means to the animals. It serves the same purpose as a human dad sternly telling his kid to quit fooling around, but we don’t know that dolphin tykes and parents undergo the same thought process we do during such an interaction.

The same is true for basically any animal communication we observe. Animals clearly send messages to each other, but we can’t get inside their heads to figure out what those messages are and how they’re received. Humans are equipped with a particular set of tools that determine how we see our world. We have eyes that see a particular range of the electromagnetic spectrum, vocal cords that produce sound waves in a set range of pitches (and ears tuned to hear them), and brains that turn those inputs into words.

Dogs, orcas, and dolphins all rely on very different cues. Dolphins and orcas echolocate. Dogs operate on smells. They literally see the world differently than we do, and we can’t assume that their communication will look anything like ours. But by teaching them bits of our own language, we can close the gap in our understanding.

Eventually—hopefully—they’ll be able to teach us a few phrases of their own.