What singing rodents can teach us about human conversation. 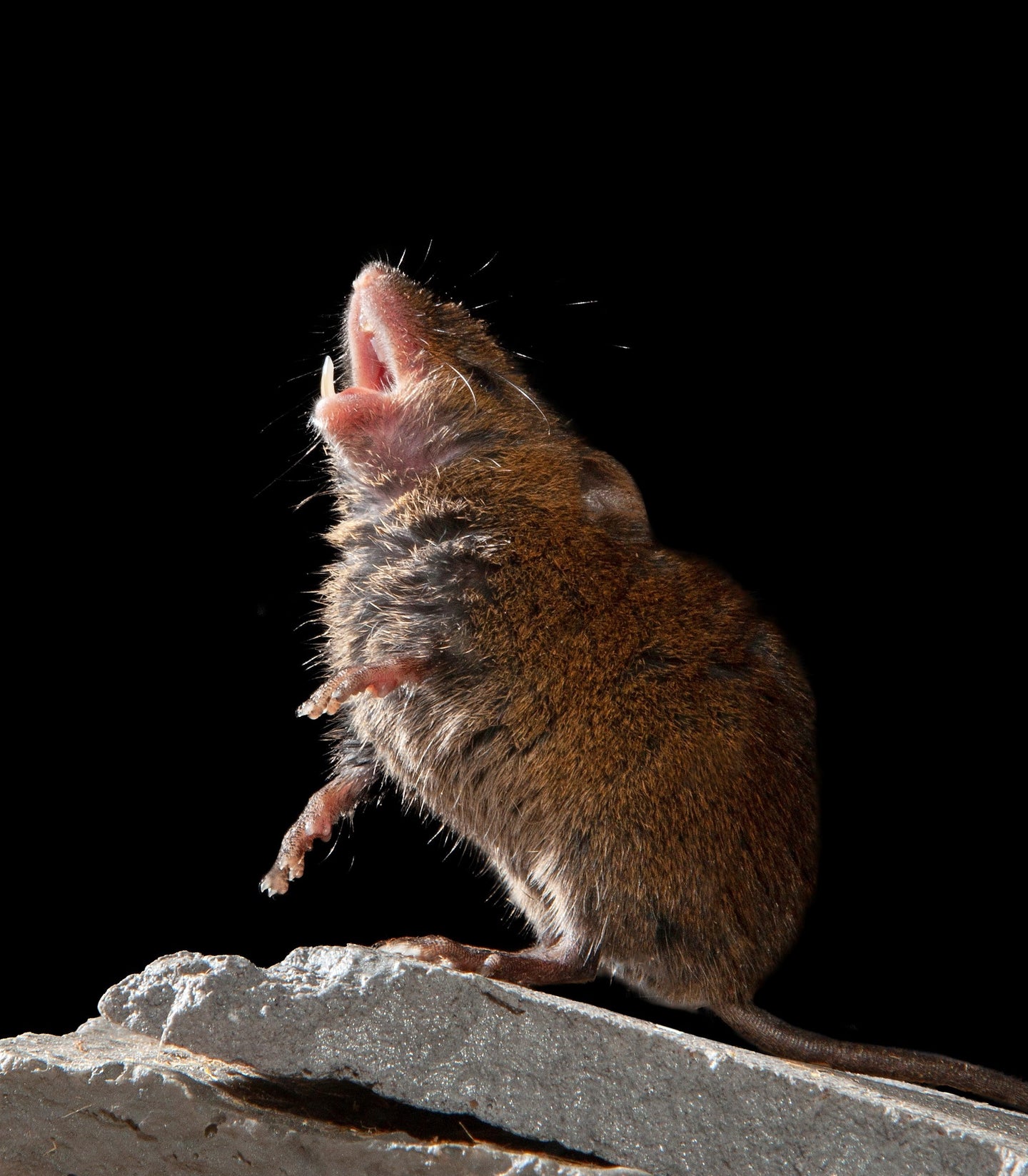 No one's ever gonna take me away from youuuuu! There's nothing that a 100 mice or more could ever doooo!. NYU School of Medicine
SHARE

The words “singing mice” might conjure up memories of Cinderelly’s—er, Cinderella’s pals and a squeaky yet exquisitely harmonized Christmas song sung by another trio of rodents.

Those musical mice might be fictional, but singing mice actually do exist—though their songs don’t sound anything like Gus Gus’ or Alvin’s. Some mice squeak out tunes to woo females, though they aren’t always audible to human ears. But Scotinomys teguina, more commonly known as Alston’s singing mouse, scurries through Central American cloud forests and breaks into audible song to communicate and find mates. And interestingly, male mice will often engage in fast-paced back-and-forth singing duels, the response speed of which has only been matched by two agitated, arguing Aaron Sorkin characters.

All joking aside, these tropical mice really are special. They communicate in song using nearly 100 audible notes and respond to one another almost instantaneously, not unlike the way humans respond to one another in conversation. It’s a feat that takes a lot of mega-quick coordination and communication between regions of the brain and many different muscles.

Other animals like bottlenose dolphins also have this conversational capacity, which biologists and neuroscientists call “vocal turn-taking.” Scientists haven’t been able to define which parts of these animals’ brains make them such excellent conversationalists, in part because it’s so difficult and complicated to study animals like dolphins in the lab. Alston’s singing mouse, however, is (excuse this pun) a perfect lab rat—it’s essentially the cousin of Mus musculus, the classic laboratory mouse.

“Humans are experts at quick conversations. The pauses between speakers in conversation is only about a fifth of a second,” says Michael Long, a neuroscientist at New York University. “We don’t really know how the brain can do this, and human brains are really complex, with nearly 100 billion nerve cells.” Mouse brains are much simpler, Long continues. And historically, research has shown that studying these simpler organisms is a great jumping off point for understanding our own brains. Upon realizing the potential of the tropical singing critters, Long and a team neuroscientists at the New York University School of Medicine brought in some in from Costa Rica and got to work.

“We were happy to find we could house the rodents in a lab right here in New York City,” says Long. “They’re wild animals, so they’ll get out of shape quickly, but with exercise equipment and enrichment objects, and terrariums and specific diets, they thrive. Happy as a clam.”

Using an arsenal of neuroscientific techniques and a handful of experiments, Long and his colleagues were able to uncover a section of the brain in singing mice that is responsible for their quick, turn-taking, musical conversation. The team is calling the region the orofacial motor cortex, or the OMC, as noted in their study published Thursday in Science.

Right off the bat, the researchers wanted to get a grip on the specifics of mouse-singing behavior. “We knew the mice would sing different songs alone versus singing socially, but we didn’t really understand the rules,” says Arkarup Banerjee, another NYU neuroscientist and study author. So for their first experiment, they housed two mice that didn’t know each other in a cage where they could hear but not see one another. By studying their musical conversations, Banerjee learned the rules: the mice are polite, and their songs are different when singing alone than with a partner. “They don’t overlap their songs, and to do that, they have to be very cognizant of when the other mouse is stopping or starting a song,” he says. When one mouse would stop, the other would reply within a split second—but unlike most humans, it would never interrupt.

The next task was to pinpoint potential brain regions responsible for the mice’s polite singing. Using surgically implanted wires and electrodes, the team was able to measure electrical signals from the brain that corresponded to the flexing of specific muscles in the animals’ jaws during song. They were essentially able to see which parts of the brain “lit up” with activity as the mice flexed certain muscles while singing. And which region lit up? The OMC, of course.

To get a better sense of precisely what this region is responsible for in mouse songs, the researchers fiddled with the animals’ OMCs using electrodes—they sped up and slowed down electrical currents in the region. When overstimulated, mice paused and sang wrong notes in conversation. But when experimenters “cooled” the OMC—which they did using a method developed by Long in prior human studies—the mice sang the correct notes, but much, much slower. Intrigued, the researchers then decided to temporarily knock out activity in the OMC altogether to fully decipher its function.

The researchers silenced the area by injecting a compound called mucosimol, known to deactivate certain brain functions, directly into the mice’s OMCs. As a control, some mice got an injection of saline solution instead. Then, the team played recordings of an Alston’s mouse song to prompt the drugged mice to respond. Long says they played the prompt song through the speaker to avoid complications if a singing mouse was feeling “shy” one day.

Critically, mice who got the placebo sang back as per usual. But mice with deactivated OMCs weren’t able to sing a reply. “The deactivated mice could still sing alone, but couldn’t engage in back-and-forth conversation,” Banerjee says. That indicated the OMC’s true function: it’s not responsible for the act of singing itself, but rather the quick, touch-and-go conversational ability. Long says the discovery is exciting, especially when considering the region might function similarly in human beings.

“One in 10 people suffer from communicative difficulty, whether that be from something like autism or traumatic effects from a stroke,” says Long, adding that he’s already started researching related conversational mechanisms in human brains. “With this first illustration of brain mechanisms that lead to vocal turn-taking in the mammalian brain, there’s a real chance for therapeutic interventions in the future.”