No one knows if lobsters feel pain, which makes boiling them alive rather complicated

Switzerland's new laws ask you to consider the lobster. 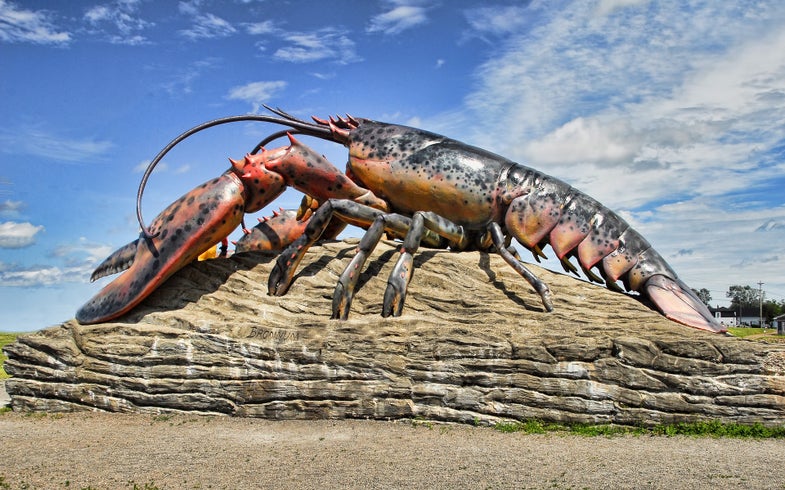 If you like eating lobster but have never cooked one yourself, here’s a brief word of advice: don’t.

Before you’ve plunged one into boiling water with your own two hands, it’s easy to imagine lobsters as big-clawed bugs who feel nothing as they’re cooked alive. And listen—it’s possible that’s true. Science hasn’t come down definitively on one side or the other. But once you’ve heard them banging on the inside of the pot trying to claw their way out, you won’t ever be able to not hear it as you eat a lobster.

Which is, oddly, not to say you shouldn’t eat them. This is not a campaign against the consumption of delicious, delicate crustacean meat. But since Switzerland recently abandoned their historic neutralism to take a stance on lobster morality, we figured we should take a look at just what the evidence says on whether our crustacean buds can feel pain or not.

Starting in March 2018, it will be considered an act of animal cruelty to boil a lobster alive in Switzerland. The Swiss will need to stun or kill animals before boiling them, and lobsters can’t be kept alive on ice. It’s actually not clear how the Swiss government thinks a lobster should be killed, but they’ve decided that enough research suggests they experience pain that we cannot boil them alive in good conscience.

The problem with pain is that it’s phenomenological, which is a fancy philosophical term for something made real just by the fact that someone experiences it. If you think that you’re in pain, then you are. No one else gets to tell you that you aren’t in pain, because they cannot possibly know whether you are or aren’t. If you feel it, you’re in it. Pain is not more or less real because other people or organisms might not feel pain in the same circumstances and can’t experience your pain for themselves.

This poses something of a quandary for scientists. They’re never going to be able to prove that lobsters feel pain because we can’t know what it’s like to be a lobster. Plenty of mammals and other vertebrates exhibit behavior similar enough to ours, and have nervous systems close enough to our own, that we can say pretty definitively that they feel pain. An injured dog whimpers, licks its wounds, and avoids the source of its injury. A fruit fly doesn’t do any of those things. It will try to avoid certain stimuli, like a sharp needle or intense heat, but it doesn’t tend to its wounds. It doesn’t give any sign—that we can recognize—that it’s suffering.

Unfortunately for lobster-lovers, crustaceans do exhibit some of those signs of feeling. Crabs that have their claws removed seem to nurse the amputated stump and get stressed when they have electrical shocks applied to them, and lobsters who get a mild acid (think lemon juice) painted onto their antennas will stroke them afterwards, as if soothing the injury. And we know that both will avoid hot water.

But we can’t go on behavioral evidence alone. Humans are wont to project their own emotions onto animals, especially if we feel bad for something we’ve done to them. Famously, one experiment on dogs found that the expression they made when they’ve done something wrong only seems like guilt because dog owners project how they’d feel in the same scenario. Dogs will make that face—even if they’ve done nothing wrong—to show subservience to their owner, who seems upset with them. What if we’re doing the same to lobsters?

After all, their brains aren’t much more complex than an insect’s. They only have a hundred thousand neurons, and no true centralized brain. They’ve got a set of ganglia (which is like a smaller, less organized brain made up of far fewer neurons) spread throughout their body. In terms of mental capacity, there’s a decent argument to be made that lobsters and crabs are just big bugs.

Flies, like crustaceans, will avoid unpleasant stimuli, but only because it’s an instinct for them. They move away from sharp objects the same way a caterpillar builds its chrysalis—even complex behaviors can have zero underlying thought.

Except, well, insects are clearly only avoiding things out of instinct. As one wasp expert told the Washington Post, a locust has plenty of survival reflexes, but even as a praying mantis is chowing down on its abdomen, a locust will eat if you feed it. It’s hard to fathom an animal that feels pain as we know it taking a dinner break in the middle of being eviscerated.

Some of a lobster’s reactions to hot water are similar reflexes. The tail flick, for example, is a reaction to any sudden stimulus, even though it seems like an attempt to escape. And some researchers think it’s possible that their desire to avoid high temperatures could just be a survival mechanism to make sure they’re living in cold enough water to thrive. But we also know that crustaceans are more complicated than locusts. They appear to tend their wounds, for one thing, and their lack of a centralized brain doesn’t preclude feeling pain. Octopuses (yes, that is the correct plural) have multiple small brains in their arms, but researchers now realize that they are quite intelligent, and can certainly feel pain and suffering.

In other words, it’s complicated. Sure, we can say that a lobster has neurons that can sense something hot or sharp, but that doesn’t mean it actually feels these stimuli. And similarly, we can’t say that just because it has a decentralized brain that it doesn’t have the capacity for pain. Unfortunately, we can’t very well ask a lobster how it’s feeling.

A crustacean’s lack of centralized brain may not keep it from feeling pain, but it does make it pretty much impossible to be sure you’re killing the animals painlessly. In more complicated creatures, like vertebrates, the most humane way to kill is to sever the spinal cord. It’s basically instant death. Sometimes people looking to ethically end an animal in a lab, like a rat or frog, will use pithing—brain matter itself has no pain receptors, so going straight for the brainstem with a sharp implement is (relatively) humane. But since lobsters have ganglia instead of a single brain, there’s no one spot you can target to sever their sense of feeling. Bashing them against a rock might provide an instantaneous death, but you’re bound to waste a lot of meat (which is just plain rude, and defeats the purpose of killing the crustacean in the first place).

So what’s an ethically-minded lobster-lover to do?

The answer seems to be: to chill. Not you—the lobster you’re hoping to eat. Putting cold-blooded animals like crustaceans (or insects) into a freezer or in icy water numbs them, and they don’t seem to have pain receptors that react to cold (they do live at the bottom of the ocean, after all). Of course, they’ll heat up as you put them in boiling water, but the transition seems to be fast enough that it shortens the time they flail about. Whether it actually changes what they feel is still uncertain, given how little we know about lobster pain in the first place. It may just help you feel better about it. But at least you’re giving your dinner a better chance at a gentle demise.

Of course, even if we knew for certain that lobsters felt pain, it’s not clear that we’d ban their consumption. We know that cows experience distress when we kill them—we even know they feel complex enough emotions to have bovine friends—but most Americans still eat beef. It’s possible that we’d all try to ignore their pain to save our own sensibilities. But given that most folks are much more likely to kill a lobster in their own kitchen than they are, say, a chicken, it’s an ethical question that may hit uncomfortably close to home.