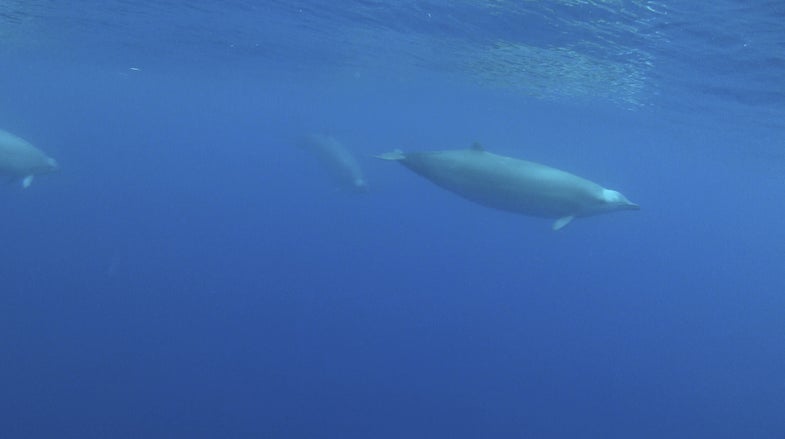 In July 1912, a whale showed up on the shores of Bird Island Shoal near North Carolina’s Shackleford Banks. It was, by all accounts, a very strange whale. Most obviously: it had a beak. It also had a thick core that tapered down, almost dolphin like, towards the tail.

A year later, in 1913, Frederick W. True, a curator at the United States National Museum (now the Smithsonian) tasked with surveying the animal’s remains would formally describe the species and give it his name. Over the intervening century, True’s beaked whale has remained something of an enigma, but a new study published today in the journal PeerJ casts some light on this cryptic animal.

It also includes the first-ever underwater video of the species, taken in the summer of 2016:

In an era when spacecrafts let us see Pluto’s ice mountains, it might seem strange that the first video of a living True’s beaked whale calf was filmed just last year. But within Cetaceans—a group that includes whales, dolphins, and porpoises—beaked whales remain one of the most mysterious.

“Maybe in the past decade and decade and half they’ve been developing newer techniques to study beaked whales,” says Dee Allen a Research Program Officer with Marine Mammal Commission, who was not involved in this study. “But they have detailed information on some of the dive patterns of only like a handful of the beaked whale species.”

The handful of beaked whales doesn’t include True’s beaked whale, which, until this study, was so mystifying scientists didn’t even really know about its coloration. True’s beaked whale quickly loses its white markings after death, so it’s hard to identify a living True’s beaked whale if you’ve only seen a dead one. Studies like this one are important because they give us information that can’t be gained just from studying a dead animal.

“The person who shot the video didn’t know which beaked whale that was, that’s how we were contacted,” says said Natacha Aguilar de Soto, lead author on the study. Aguilar de Soto splits her time between the University of St. Andrews, Scotland and the University of La Laguna, Tenerife. “They sent us the video and asked what this animal was. We’re talking about a group of four animals 10 meters [32 feet] from the boat and they couldn’t recognize it.”

So why do these animals remain such a mystery? The difficulty lies in the fact that beaked whales, which can reach the size of an elephant, spend only about eight percent of their time at the surface. The rest of their life is spent hunkering down in the deeper reaches of the ocean, around 3,000 feet below sea level.

“Many people that spend all of their life on the sea have never seen a beaked whale,” says Aguilar de Soto. This video was recorded by a company that had taken a group of teenagers out to sea to take water samples as part of an educational activity.

Data pulled from the video, along with info from previous sightings (like photos and genetic data from strandings) help create a broader profile of the animal—including what the calves look like and the way coloration can vary.

“There’s six species [of beaked whales] that occur in the north Atlantic,” says Allen. “This is one of the species that probably has the least known about it, and most of the information is from strandings.” In total there have been maybe 50 known strandings, or roughly one every two years, since the species was first described.

The most recent study collected data from sightings of True’s beaked whale made by scientists, whale watch companies and educational teams in the Azores and Canary Islands, to help build a comprehensive understanding of these animals in this region of the world. The data suggests that the region may be a “hot spot” for studying True’s beaked whales both because of the frequency of sightings and the geography of the region—which includes deep waters close to shore.

And if True’s beaked whale wasn’t already fascinating enough, it’s also worth mentioning that it’s the only only beaked whale with distribution in the northern hemisphere (including both sides of the North Atlantic) and in the Southern Hemisphere, where it goes from Brazil to South Africa to South Africa and Australia.

“And then there’s a gap in the middle,” says Aguilar de Soto. “It’s possible that really they are two species; we don’t know.”

And we won’t know unless we can find some way to study the animal more, though this study used gene analysis one some of the stranded specimens to tie True’s beaked whale to those found in the Northern Hemisphere—making it the southernmost occurrence of the species. They’re now trying to put together a new study to determine if it’s one species or two.

“The fact they were able to confirm with the genetics is important,” says Allen. “Beaked whales are so challenging to identify to the species level, because there’s so little known about so many of these species, and there’s a lot of similarities in the appearance of different species.” There’s also the fact that the way beaked whales look changes significantly as they age, and the females and the males don’t look alike.

“They are amazing creatures,” says Aguilar de Soto. “They are able to dive up to 3 kilometers [a bit more than 1.8 miles] in depth on a lung full of air. They are mammals like us. They breathe air, give birth to their calves under water, nurse them under water, and take care of those calves when they feed at depth. They are an incredibly example of the adaptation of marine mammals to live in deep waters, and we know so little about them.”