What are the smartest animals in the world, and how do we know?

There are many members of the animal kingdom that rival our own wits. 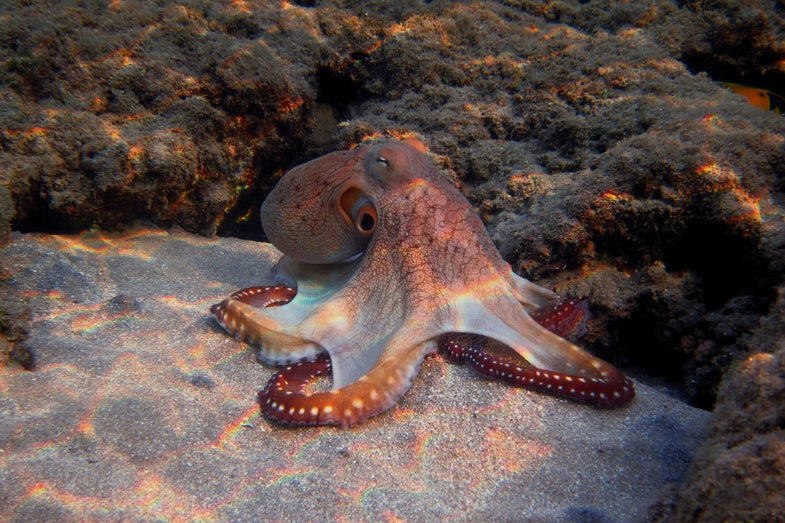 Octopus can find their human friends in a crowd. Deposit Photos
SHARE

No other member of the animal kingdom can ace an algebra test or write an A+ essay. But that doesn’t mean other species aren’t highly intelligent. Several members of the animal kingdom have impress cognitive chops and cerebral skills. What are the smartest animals in the world? Here are a few of the most intelligent animals that will might change your opinion of what being smart means.

Chimpanzees are our closest living relatives, so its no surprise they make the list for most intelligent animals. We share almost 99 percent of our DNA (the little bits of genetic code that make us who we are) with them. It turns out that they share some of our brain power as well. In a study published in 2007, researchers gave adult chimps, adolescent chimps, and college students the same cognitive test. The exam involved remembering where a list of numbers—from one to nine—were located on a touch screen monitor.

Chimps and humans alike saw the numbers in their locations for less than a second. Then they were asked to remember where those numbers had been and show the researchers. The adult primates and humans performed about the same. But the adolescent chimps left them both in the dust. They remembered each number’s location with far better accuracy. Researchers think that these youngsters were using a type of photographic memory, which allows an individual to recall images with extremely high accuracy even if they only glanced at them for a split second.

Scientists have thought for a long time that goats are far smarter than their unassuming demeanor leads many of us to believe. Finally, a group of researchers in Australia decided to put these barn animals to the test. To do so, they set up a contraption that held fruit at the end. To access the tasty treat, the goats had to use their teeth to drag a rope down, which activated a lever they had to lift up with their mouths. If they could figure all that out, the fruit was theirs.

Nine out of 12 goats mastered the task after around four tries. When the researchers had all the goats try again 10 months later, the majority still remembered how to work the system.

Smartest animals in the world: Elephants

Anyone who has interacted with an elephant knows these animals are very smart. But are they among the smartest animals in the world? Researchers have performed numerous studies on the subject. One found that elephants can understand the difference between languages and whether a man, woman, or child is speaking.

How do they know? In Africa, only certain tribes hunt down elephants. Scientists played recordings of a group that does hunt them down and one that doesn’t. When the elephants heard the recordings of the elephant-hunting group, they became fearful and moved away from where the sound was coming from. When they heard the language of the group that doesn’t hunt them down, they didn’t move or change their disposition. Then, researchers played recordings of the language that scared them, but included women, children, and men. The elephants only became fearful when the voice came from men—they do the hunting.

One way that scientists measure intelligence is something called the mirror-self recognition test. The idea behind this test is to determine whether an animal can recognize themselves in front of a mirror. To figure that out, scientists place a colored marking on the animal’s body. Then they place them in front of a mirror. Most often, if the animals recognize themselves, they will show signs of trying to remove the marking from their bodies, like scratching or rubbing it off.

Many animals don’t pass this test. When they see their reflection in the mirror they think it’s another animal of their kind, and either run away and try to fight or scare the stranger.

When researchers placed markings on dolphins, the aquatic critters investigated the smudges in their reflections. In other words, they knew the marking belonged to them, and not some other animal; they knew the dolphin in the mirror was them.

It’s hard to imagine that a crow could be as smart as you, or perhaps even smarter. But scientists have done a series of studies that prove that they might be just as good, or better, at solving problems. In one study, researchers gave crows and humans the same puzzle: A toy floats on top of water inside a tall glass, too narrow for a bird to get its beak down or for a small child to place their hands into. Children younger than eight years old are completely stumped, and generally can’t figure out a way to get the toy. But crows aren’t confused at all. They simply drop pebbles into the narrow glass. Eventually the stones displace enough water at the bottom of the glass that the toy rises to the top, and the birds can quickly snatch it.

Smartest animals in the world: Bees

Bees are known mostly for their sting. But they are also highly intelligent little creatures. Researchers taught bees to identify which of two horizontal lines was above the other. When they got the answer right, they received a sugar-syrup reward. The thing is, the researchers only taught them how to identify whether lines that were horizontal were above or below. So, when the researchers showed the buzzers vertical lines, the bees simply flew away. They knew there was no way to get that tasty treat!

Octopuses are in a league of their own. Most invertebrates don’t have the level of intelligence that scientists say these weirdly shaped sea creatures do. In one cool study, researchers tested whether the creatures would be able to distinguish between two different people. They had two individuals interact with an octopus, with one acting extremely friendly and another being cold and standoffish. After a short while, when the two people would enter their living area, the octopus would ignore the impersonal one in favor of the more friendly guest.