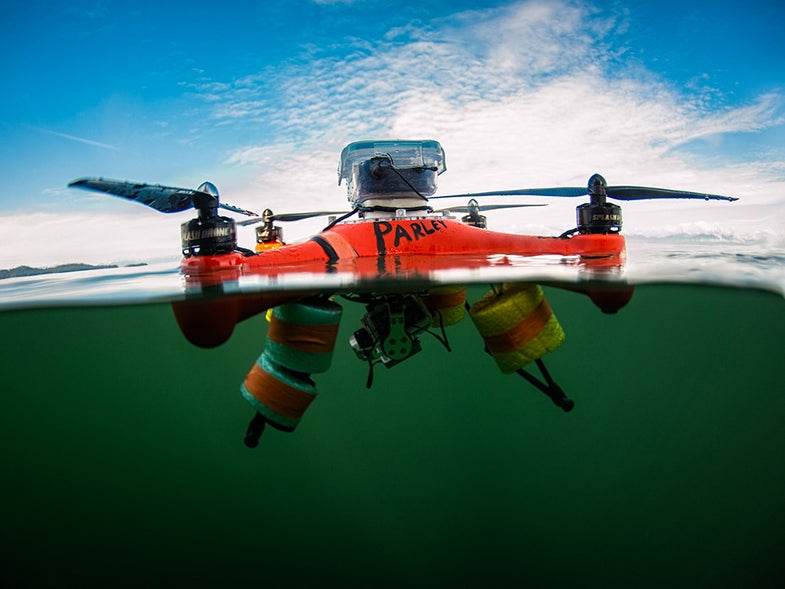 Ocean Alliance has other drones it plans to deploy to study whales and other marine life. Earbot, pictured above, can land and float on the water as it listens for and records whale calls. Christian Miller
SHARE

Iain Kerr was having a bad day. He and his research team had been cruising the Gulf of Mexico in a motorboat all morning chasing sperm whales, hoping to get a tissue sample to take back to their lab. But the behemoths were being frustratingly elusive. At one point, Kerr was balancing on the bow of the boat, poised to shoot a modified crossbow that’d pop out a pencil eraser-sized chunk of blubber from the whale’s side. But just as he got close enough to shoot, the whale dove—for the fifth time that day. Sperm whales dive for 45 minutes to an hour, so when they’re gone, they’re gone. After 9 hours on the boat, which costs around $2,000 a day to rent, and no data to show for it, Kerr worried he was piddling away funding and donor money. “It felt like I was standing in a cold shower ripping up one hundred dollar bills,” says Kerr, a biologist who runs the nonprofit research organization Ocean Alliance. That’s when two things hit him: a billowing mass of whale mucus, and an epiphany. “I was sitting there fuming, and this cloud of snot enveloped me,” Kerr says. The whale snot “was stinky and horrible”, he says, “but as a biologist, anything that’s stinky and horrible is probably productive. I wondered if we could collect and study snot.”

His stinky, horrible hunch was right. Whale snot, it turns out, is packed with DNA, viruses, hormones, and microbes—all incredibly useful things to a variety of scientists. With DNA, geneticists could tell if an animal is native to the area or just passing through, epidemiologists could track the spread of infectious diseases, and biologists could analyze hormones to see if an animal is stressed to the point of infertility.

The only hurdle was figuring out how to get a bucket full of whale snot. But Kerr had an idea: As a hobby, he builds and flies remote control aircraft. Could a similar technology scoop up whale boogies middair?

So goes the origin story of SnotBot: a hexacopter drone covered in petri dishes that collects snot for science. Over the next few years, Kerr’s group, Ocean Alliance developed the bot with help from students at Olin College of Engineering in Massachusetts, with the idea that it could make whale science easier for the researchers and less invasive for the whales.

Typically, marine biologists employ the same techniques that failed Kerr: A motorboat equipped with long sticks and modified crossbows to collect whale biopsies. But Kerr hopes these flying research robots will soon change that. They’re part of a larger trend going on in the field in which scientists are employing drones to capture data that previously proved difficult to gather.

Drones are clearly having their moment of fame. Farmers are using temperature-sensing drones to monitor crops. Meteorologists and climate scientists are sending drones to track storms and hurricanes, and fast-food chains are even experimenting with ones that deliver pizza. But the technology has also proved useful for studying elusive animals in remote locations, whether that’s orangutans in the trees of Indonesia or whales in the middle of the ocean.

And they might be doing more than accessing hard-to-reach places. “Tech like SnotBot are a catalyst for the democratization of science,” says Kerr. Renting research vessels for a remote location can cost nearly $20,000 for an entire trip. Drones can often eliminate the need for such a ship altogether. A complete SnotBot package, including cameras, runs about $4,500 — and can be used over and over.

Before the robot can take to the skies as a standard research tool, it needs to prove its worth. It’s still unclear whether whale mucus can provide consistent measurements of hormones and DNA that are needed to study the monstrous animal.

Whale blow is a diffuse matrix, and it’s heavily contaminated with seawater,” says Liz Burgess, a marine biologist at the New England Aquarium in Boston. That’s fine for simply detecting which molecules are present in a snot cloud, but consistently getting a precise concentration of a stress hormone? Forget it. “It’s definitely not that easy.”

Burgess studies whale blow too, but grabs it the old fashioned way: with a 30 foot pole. She says using drones and traditional methods together might eventually be an ideal situation.

Ocean Alliance is developing other drones besides SnotBot, like FLIRBot, which can detect infrared light. Researchers could measure whales’ body temperatures just by looking down their blowholes. They also have EarBot in the works; it lands on the water, powers off, and listens for whale calls.

There’s no doubt drones have a place in science. Even the federal government is getting in on the act. The National Oceanic and Atmospheric Administration (NOAA) collaborates with a drone project that passively listens for whales. The bot, called Saildrone, monitors several whale populations—including the North Pacific right whale, a species with only 30 living individuals left.

“It’s really important to monitor these animals in any way we can,” says Jessica Crance, a biologist at NOAA’s Alaska Fisheries Science Center and lead acoustics researcher for Saildrone. Passive acoustics, Crance says, seems to be the best way to do that.

Saildrone is 23 feet long and 15 feet high. It’s been deployed in the Atlantic Ocean, the Gulf of Mexico, and in the Bering Sea where North Pacific right whales live. The drone is motorless and relies on a combination of battery and solar power to turn its sails and navigate. Researchers simply input coordinates and the drone will get there.

These bots are especially helpful for species like the North Pacific right whale, which are hard to spot because they seldom come to the surface. Saildrones can silently sit on the waves, listen for the whales to start talking, and then track them. And because they can stay at sea for many months, Crance hopes to use them to plot migration routes. That could be crucial data for species conservation; if researchers find that a swath of waters in the whales’ migration route has been uncharacteristically warm, for example, or has less food available, they might be able to pinpoint why so much of the population has died off.

But this project, too, still has hurdles to clear. Researchers are still working on making the sound recordings clear enough to identify distinct species vocalizing beneath the waves.

“The dream would be to have these recordings be clean enough to monitor for any species in the Bering Sea,” Crance says. “If we get there, we could use this as a real-time tool—if we heard a right whale vocalizing, we could alert and divert any vessels nearby.” She adds that the tech is being used to study other animals besides whales, too, like fur seals and various fish species; using multiple Saildrones and technology akin to sonar, researchers can triangulate the positions of these animals as they migrate and shift habitats.

Drone tech isn’t always a magic wand for making research affordable and easy, however. Megan Ferguson, a marine ecologist for NOAA, looked into using ScanEagle, an aircraft-like drone that’s been used by the military, as a replacement for manned aircraft to count whale populations from the skies. Her 2015 study found that the two methods estimated the same number of whales, but using ScanEagle required far more labor and resources.

“It took an analyst seven hours to analyze one hour of flight from ScanEagle,” says Ferguson. “It’s a huge investment in time and labor.”

But that could change with the help of artificial intelligence. Ferguson says machine learning could eventually teach drones to look for whales all by themselves instead of relying on a human analyst to scrutinize all of the collected data.

Kerr agrees. “It’s actually quite difficult to fly the drone and be at the right place behind the blowhole when it blows. And, forgive my modesty, I’m not a bad pilot,” he says. But with machine learning, a drone can learn how to stay in position in windy conditions and adapt to whale behavior—essentially fly itself.

So will drones—artificially intelligent ones or not—ever be able to replace the human hand out at sea?

“There are aspects where a drone could be useful. They obtain photos easily and they don’t interrupt whale behavior,” Crance says. “But it’s important to remember there are things where you just need a human on a vessel,” like those tissue biopsies collected via crossbow.

Still, drones seem poised to make whale science much less invasive, and show scientists whales in a new light. “Having looked down at whales with drones after 30 years of studying them, and seeing behavior and activity that you could only imagine from the boat,” Kerr says. “I can’t go back to studying whales without a drone. I just can’t do it.”