Now we know what an angry, hungry bat sounds like 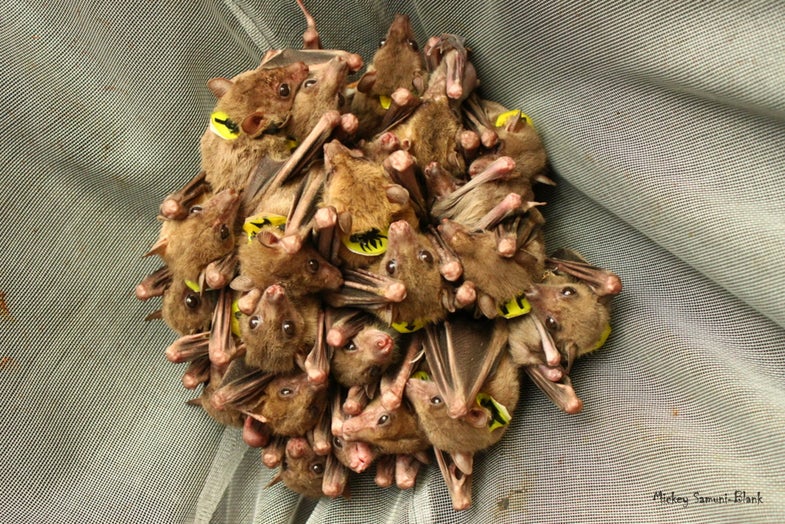 Jostling for food and living space can make for some tense interactions with your roommates. But just imagine thousands—or millions—of individuals spending decades sharing the same dark room. They’d need constant communication to keep the peace.

That seems to be the case even for Egyptian fruit bats, which live in large colonies and are generally social creatures. Walking into a typical roost can be a noisy experience, but are the bats just making random noises or are they actually talking to each other?

In a study published in Scientific Reports on Thursday, researchers suggest that the noisy bat calls actually do contain a lot of information, including who’s ‘speaking’ and whether the bats in a particular interaction are fighting about food, a mate, or something completely different.

“The vocalizations we looked at in this study were all categorized in the past as agonistic calls, that is, aggressive vocalizations emitted during fighting. We now show that there is information in this chaos. We demonstrate that a third individual listening to a fight between two bats can tell who is shouting, what is the context of shouting (e.g., fighting over food or over position or over mating) and even to some extent who is being shouted at. We now know that the cacophony that we hear when entering a bat cave is far from just noise,” Yossi Yovel, the lead author of the study, told Popular Science in an e-mail.

By recording a group of 22 bats for 3 months straight, Yovel and colleagues were able to figure out which bats were involved in any conversation and what they were squabbling about. But that doesn’t mean that the researchers have identified a bat language, or even the bats’ individual call signs. What they did manage to do is recognize individual bat voices.

“It is similar to humans individual voice. It is not that bats state their name, but that when you examine their voice, you can recognize who is shouting (calling),” Yovel says. “In fact, in the study, we used algorithms that are typically used for human speech recognition to recognize the individual bats.”

They could also figure out specific noises that related to food, mates, or a need for some space. But this isn’t the start of some kind of inter-species communication. (Go home Arrival, you’re drunk.)

“We do not find a ‘word’ that mean ‘hello’ or ‘move’ or ‘eat’ in bat communication,” Yovel says. “You could imagine this as something like this: when a bat shouts at another bat for taking its food, the vocalizations will always be higher in pitch than when they are fighting over a position in the cave.”

The next step will be to figure out how bats know to make those noises. Are they born with this manner of “speaking” or do they learn it over time? Yovel and his colleagues are also looking into vocalizations made outside of the confines of the roost. To gather that data, they are attaching tiny microphones to bats in the field, which is adorable. Maybe someday soon we’ll have an even more detailed answer to that age old question: ‘what does the bat say?’