Koko, the beloved gorilla who communicated through sign-language, dies at age 46

Remembering, as Koko once put it, a 'fine-gorilla-person.' 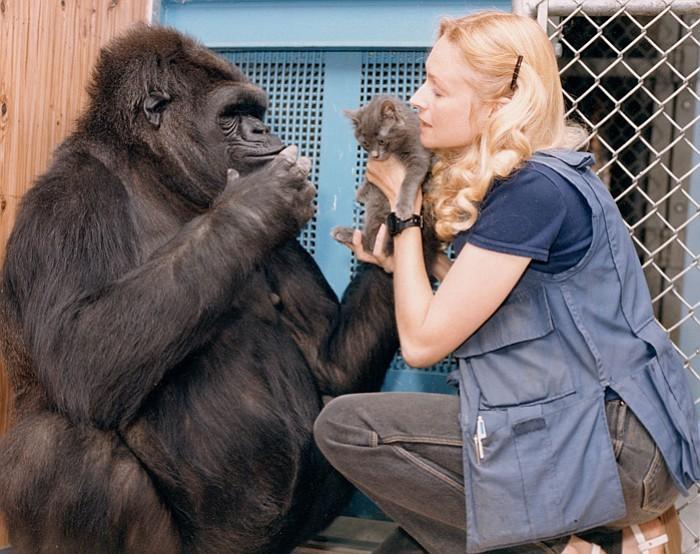 Koko, the gorilla famous for her ability to communicate using American Sign Language, died in her sleep Tuesday morning at age 46. Her passing leaves the world to mourn the loss of a most beloved primate, who gave humans an unprecedented window into the thoughts of another species.

That Koko was incredible is indisputable. She clearly thought so, too—“queen” was one of the first signs she used to describe herself. And she got publicity that royalty would envy. Koko graced the cover of National Geographic twice; one cover captured a tender moment between Koko and her pet kitten “All Ball” (Koko was fond of rhymes), the other, Koko snapped herself using a camera in the mirror.

Koko made a remarkable contribution to our understanding of primate cognition and the species’ capacity for communication. She could execute more than 1,000 signs (and some new ones, like barrette, she supposedly concocted herself), and respond to 2,000 words of spoken English.

But critics questioned if Koko actually understood the words she was signing, arguing she could just be mimicking her handlers. When comedian Robin Williams—who Koko met in 2001—died, The Gorilla Foundation stated Koko appeared “somber” when she was given the bad news. Was Koko actually sad, or were her caregivers interpreting her behavior to seem that way? Could she even remember Williams?

Whether she remembered him or not, the pair did share some laughs (and a tickle fight). She also rocked out with Flea, the bassist from the Red Hot Chili Peppers—although Koko preferred an instrument she could play herself, like the recorder. William Shatner’s visit with Koko was so profound he couldn’t help detailing it in his autobiography.

Koko, a western lowland gorilla—the most widespread species of gorilla in Africa—was born at the San Francisco Zoo on the Fourth of July in 1971. Her birth name was Hanabi-ko, which translates to “fireworks child” in Japanese, but the nickname Koko quickly caught on. Frances “Penny” Patterson, a budding animal psychologist, started teaching Koko sign language at age 1 as part of Patterson’s studies on the linguistics of lowland gorillas.

In 1976, Patterson raised thousands of dollars to adopt Koko and establish The Gorilla Foundation in Redwood City, CA. Koko and Patterson would spend the next 42 years together, and what was dubbed “Project Koko” became the longest research study on apes and language in history.

“Koko touched the lives of millions as an ambassador for all gorillas and an icon for interspecies communication and empathy. She was beloved and will be deeply missed,” The Gorilla Foundation noted in a statement this week.

It wasn’t just Koko’s language skills that made her special. The 280-pound gorilla had a soft spot for cats. Researchers said her favorite picture books were The Three Little Kittens and Puss ‘n’ Boots. One year, she was given a kitten stuffed animal. Apparently, she was not impressed.

“She was terribly upset,” Ron Cohn, a biologist with the foundation, told the LA Times in a 1985 interview. Koko ignored the toy, and signed “sad” to reinforce her displeasure. But much to the gorilla’s delight, on her next birthday she was allowed to pick out a pet kitten from an abandoned litter. One particular mewing fluff-ball caught her eye. Koko was smitten.

The gorilla cared for the kitten as if it were her own baby, nursing it, cuddling it, and eventually naming it All Ball. Koko also used the kitten as a scapegoat when she was being bad; one time, Koko ripped a steel sink from a wall, pointed at All Ball, and signed “cat did it.”

The famous picture of baby All Ball in Koko’s arms captured hearts across the world, but then quickly broke them. Shortly after, the cat was tragically struck by a car and killed. In a PBS documentary, Patterson asks Koko, “What happened to Ball?” A dejected Koko signed the words: cat, cry, have-sorry, Koko-love.

Unlike the unfortunate All Ball, Koko lived an exceptionally long life—the average lifespan of a wild gorilla is between 35 and 40 years, with some gorillas in captivity living longer than 50 years . When Koko wasn’t practicing sign language, she was busy playing or munching on apples, nuts and corn-on-the-cob. She also loved celebrations (unsurprisingly, her birthday was her favorite), and fashioned a yellow piece of fabric into a skirt for Easter one year.

But Koko also had a serious side. Her favorite movie apparently was Tea With Mussolini, a sad story about an orphaned boy growing up in pre-World War II Italy, starring Cher and Judi Dench. When Jurassic Park came out in 1993, Patterson said in an interview with the Atlantic that Koko became frightened of her toy dinosaurs; caregivers caught Koko trying to push the plastic toys away from her with a tool.

Patterson, now 71, and Koko were often referred to as a cross-species family. The pair spent a lifetime learning from each other, growing up and growing old together. Patterson reported that they even discussed death one time. “Where do animals go when they die?” Patterson asked. Koko signed back, “a comfortable hole,” and then gave Patterson a kiss goodbye.

The Gorilla Foundation says Koko’s memory will be honored by continuing work on wildlife conservation in Africa, The Maui Great Ape Sanctuary, and a sign language app. You can pass on your remembrances of Koko to kokolove@koko.org.

Koko once called herself a “fine-gorilla-person.” We couldn’t have said it any better.

Scroll down for some of Koko’s finest moments caught on camera.