Insects are disappearing from science textbooks—and that should bug you

They make up the biggest bunch of the animal kingdom by far. 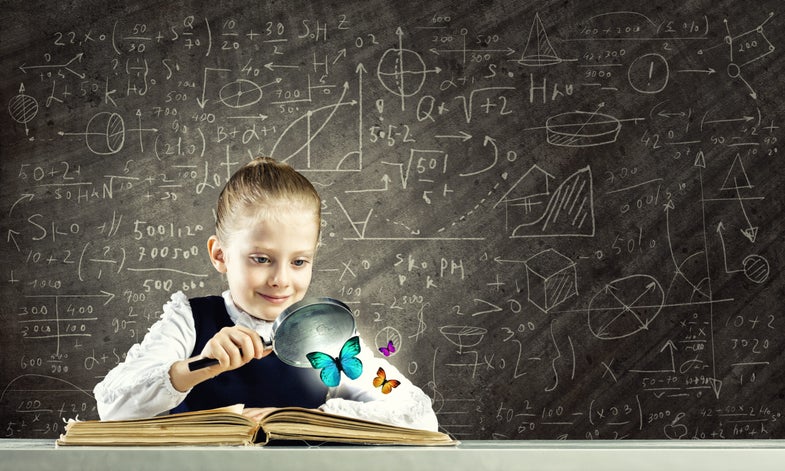 Earth is creeping and crawling with bugs—up to 30 million species and 10 quintillion individual insects. Bugs outnumber all other species in the animal kingdom by orders of magnitude. So it would make sense that they have a starring role in science textbooks, teaching students essential lessons about biological processes and biodiversity.

Except they don’t. A new study published in the journal American Entomologist has some sobering news about insects and intro-to-bio books: They simply aren’t represented. Despite the critical role the critters play in everything from the food chain to disease, they’re overshadowed by vertebrates, taking up less than 0.6 percent of introductory biology texts. And despite the sheer number of insects and their impact on Earth and its inhabitants, mentions of insects in introductory biology textbooks have dwindled over the last 100 years.

Kiran Gangwani and Jennifer Landin, researchers at North Carolina State University, studied 88 introductory biology textbooks published between 1907 and 2016, then looked for mentions of insects in the books’ sections on biodiversity. If there wasn’t a biodiversity section in the book, they looked for mentions of the word “insect” in passages that discussed life cycle or diversity.

Visual depictions of insects declined, too: 1950, the textbooks studied averaged nearly 19 illustrations of insects, but that fell to fewer than 5.5 after 1970. And some insects get much more face time than others. Butterflies, flies, bees, and ants star most often in today’s textbooks, and grasshoppers—whose anatomy is often used to model how insects’ bodies are organized—appeared a large number of textbooks over the century.

Given the huge number of insects, what did bugs do to get left in the dust? According to co-author Jennifer Landin, an associate professor in North Carolina State University’s department of biological sciences, an increased focus on genetics and cell biology is to blame. “Something had to get cut,” she says. It makes sense: As technology improves, biologists have made astonishing strides in understanding what happens in the cellular realm. As a result, all animals have suffered.

“There’s no question that natural history has been gradually seeping out of biology textbooks for a long time,” says Jennie Duscheck, author of Asking About Life, an introductory biology textbook.

Gwen Pearson, education outreach coordinator for the Purdue department of entomology, chalks the decline of natural history in education up to a simple lack of nature in modern life. “Children and college-age kids are afraid of being outside, she says. “They’re afraid of nature because it’s very foreign to them. I mean, inside is where the power outlets are.”

Because people don’t get as much exposure to the outside world as children, says Pearson, they’re not as curious about the natural world. “It’s really hard to help people who grow up in such a controlled environment connect to the immensity and complexity of the exterior world that is run by billions of tiny, tiny animals,” she says. “It’s not the planet of the apes—it’s the planet of the arthropods.”

Humans have always lived on the benevolence of the tiny creatures: After all, insects pollinate food and break down the world’s waste. They can also pass along deadly diseases. But that relationship felt much stronger in a past before pesticides, antibiotics, and air conditioners. When studying older textbooks, Landin was struck by the personal insect-to-human relationships they described. In the past, people collected bugs and connected with them regularly. “That personal relationship declined,” she says.

That decline can be traced in the language of introductory biology textbooks themselves. Gangwani and Landin found that texts published before 1960 contained nearly nine times as many emotionally charged descriptions of insects than those that came after. In the past, insects were praised with words like “industrious” and “friend,” and excoriated with words like “tormentor” and “nuisance.” In the days when scientists were just beginning to understand insect-driven epidemics, says Landin, humans and bugs were portrayed as locked in an unending war. But over the years, as insect-borne diseases became less mysterious and more easily cured, the emotionally charged language died out.

Ironically, insects are dying out, too. In Puerto Rico, for example, their numbers dropped 60 percent between 1976 and 2013, leading to catastrophic consequences for the island’s food chain. The timing of the study is intriguing to Misha Leong, an entomologist at the California Academy of Sciences. “Insects are disappearing from textbooks, but they’re disappearing in real-life systems as well,” she says. If insect numbers continue to decline, she says, that could be reflected in textbooks for years to come.

Of course, bug experts have skin in the textbook game. But for Landin, who is not an entomologist, it’s just as important to ensure that creepy, crawly creatures get their due in intro-to-biology books. “You can learn all sorts of interesting things about the world by looking through [an insect’s] compound lens,” she says.