Chimps can gesticulate with the best of them

But they don't point in quite the same way we do. 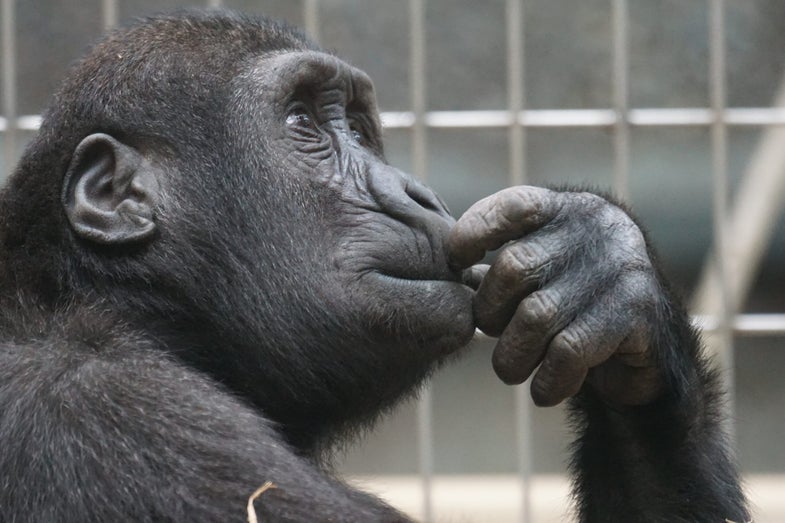 Pointing seems pretty basic. You’ve probably been doing it since you were a baby. But not every animal is as gesturally gifted as you.

Just look at cats: you can point at a bird all you want, but the cat’s not going to look if it hasn’t already noticed its potential prey. And that’s not just because felines are ornery creatures that want to prove they’re too good for us. It’s because gestures like pointing are actually quite sophisticated and abstract. We’re one of only a few species that can encode meaning in gestures.

Go ahead and guess which other animals do it. If your first guess was “other great apes,” give yourself a gold star. If your second guess was “ravens,” go ahead and take a platinum star. So far, those are pretty much the only two groups that can use gestures to communicate ideas. Apes in captivity point quite a bit, though it’s less common in wild apes, and a new study in the journal Biology Letters shows that chimpanzees don’t just point at things—they can encode distance, too.

That doesn’t sound impressive, I know. You know that when someone extends their finger farther, that means the object they’re referencing is a greater distance away. If that’s too abstract to put into words, try it right now. Point to something a few feet away from you. Now point at something far enough away that it’s almost out of sight. You probably reached farther the second time, because we can pack two levels of information into that gesture: the idea that we want someone to direct their attention toward something, and whether the object we’re referencing is especially near or far.

This study is the first to show that chimps are capable of including that distance component in their gestures—but they don’t necessarily do it the same way we do. Humans reach farther out to indicate distance; apes reach higher. When the chimp study subjects tried to communicate with a human partner about food that was placed far away, they held their hands up higher off the ground. Food that was close by was metaphorically lower. They also seemed to hold their mouths open wider to indicate distance, but that association wasn’t quite statistically significant.

The fact that the chimps didn’t do all this gesticulating while alone in the room is key. A hand motion made in isolation generally isn’t meant to communicate anything—there’s no one to communicate with. If chimps only gesture in the presence of a human, that indicates the movement is deliberately communicative.

And they may have learned it from us.

Wild apes don’t seem to point the way captive apes do, possibly because the latter have learned the trick under human influence. Dogs and dolphins have done something similar, though they don’t tell us anything with gestures. When you point at a ball or a deer, dogs understand that you’re trying to direct their attention to something—and will look. Dolphins do the same thing. Admittedly, these animals don’t have very convenient appendages with which to point. But scientists haven’t noted any communicative nose flicks, either.

Chimps living in the wild may not point, but they do have some gestures. They use itching to indicate to one another where they should scratch or groom. Again, that might sound really basic. But think about how impressed you’d be if your dog used its paw to show you exactly where it wanted to be scratched. You’d be blown away, because most animals just don’t do that. Chimps do.

Humans take the whole thing to the next level. We don’t just encode distance in a gesture, we can also encode time. For most people who speak languages that are read from left to right, “tomorrow” is located to the right. Folks who read from right to left or top to bottom also see the next day as sitting in whatever direction a sentence generally terminates. And intriguingly, the few remaining cultures without any writing system at all don’t tend to have a specific direction associated with the days to come.

We’re almost all united by our sense of where the broader future is. When gesturing towards it, most people see the future as stretching out in front of them. But the Aymara people of the Andes think that it’s behind you, because it’s still hidden—whereas the past is easy to see, and therefore right in front of you.

There’s still obviously a lot to learn about chimp gestures. Do they use distance encoding in the wild, too? Can they learn to encode other ideas? And when will they learn to give someone the bird? Only time—and more research—can tell.