Its adorable fossil is teaching scientists a lot about bird evolution. 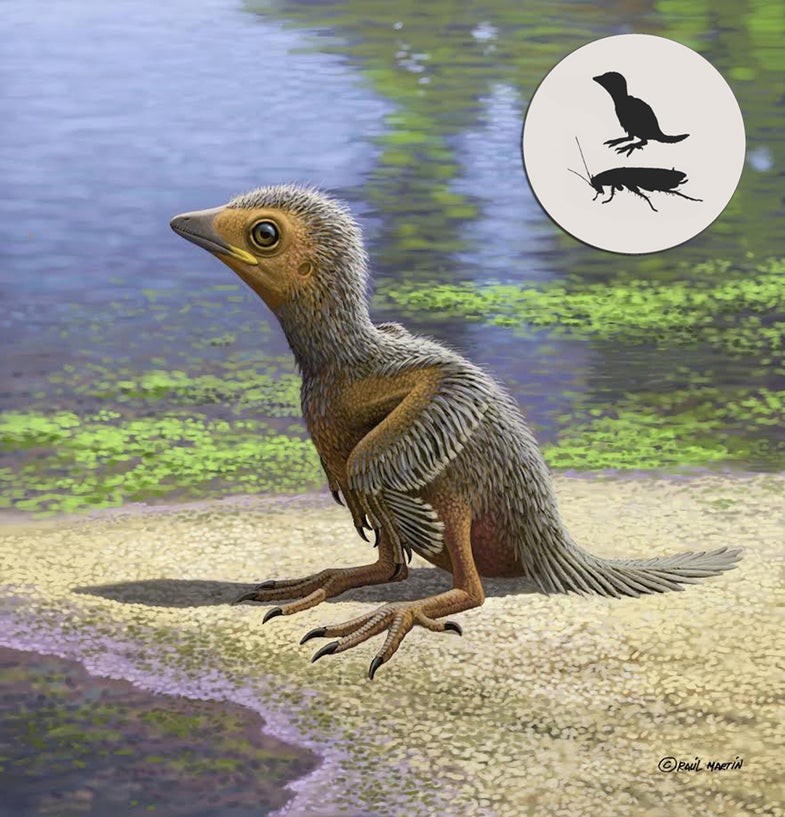 How much can scientists learn from one itty bitty baby bird? Well, if the bird in question is around 127 million years old, and you’ve got yourself a synchrotron—a particle accelerator used to take incredibly detailed X-rays—you can learn quite a lot.

In a study published recently in Nature Communications, researchers led by Fabien Knoll from ARAID-Dinopolis and the University of Manchester describe an ancient, unlucky little hatchling from the group enantiornithes, a lineage of ancient birds with no living descendants. The specimen would have stood no higher than a human pinky finger, and weighed just .3 ounces. It may not even have had feathers when it died. But by studying its bones, scientists say, they can add to our understanding of a crucial point in bird evolution.

“Birds are beloved organisms with a very rich evolutionary history,” says Luis Chiappe, director of the Dinosaur Institute at the Natural History Museum of LA County and co-author of the study. “They are the living descendants of the dinosaurs, animals that expanded the imagination of many people. And this specimen comes from a critical time in their evolution.”

Scientists have identified a 150 million-year-old genus called Archaeopteryx as the link between dinosaurs and the birds we know and love today. “But then we have a significant gap in the fossil record,” Chiappe explains. “We only start getting records of early birds in China and elsewhere around 20 million years later.”

Chiappe and his colleagues know that bird ancestors and relatives must have been busy during the interim; when they show up again in the fossil record around 130 million years ago, they’re a diverse bunch of animals, radiating out into all sorts of different species.

“You see this diversity of flight styles, of ecologies,” Chiappe says. So researchers are always looking for more information on how those differences developed. “It would be wonderful to have all their fossils, to have everything from that gap,” he says. “But we haven’t found that yet.”

The next best thing, he says, are specimens like the one described in the new study—little baby hatchlings. Based on how quickly their bones seem to have been developing to give them the power of flight, for example, scientists can infer how dependent they were on their parents.

“They’re very important, because they tell us a lot about how these early birds grew and developed, the kinds of strategies they had for survival,” he says. “On the modern spectrum, you get these little chicks that are active the minute they hatch, chickens and ducks, for example.” In biology, those sorts of species are known as precocial. Humans, of course, are the opposite of that—we come out all fragile and floppy and in need of attention, which makes us altricial. There are artricial species in the bird world, too. “Songbirds and parrots are essentially completely dependent,” Chiappe says. “They hatch naked—meaning they have no feathers—their eyes are shut, they’re essentially completely hopeless.”

But those revealing young specimens are also quite rare. Not only are they fragile—we’re talking about ancient bird bones a few centimeters long, after all—but they’re also not in a location that lends itself to the fossilization of infants. This particular hatchling was found in the Las Hoyas site in Spain, where it was preserved at the bottom of a lake.

“The majority we’re finding of about this age are from lake deposits, corpses that somehow found their way to the bottom of a lake where there was very little oxygen or scavengers, so they’re preserved very well. Some even have feathers,” Chiappe says (this little one didn’t, but it’s not clear whether it was born bald or its plumage simply didn’t survive). “But that’s not where they lived. These are primarily forest birds. And as a hatchling, even if you’re relatively precocial, your range of movement is going to be more limited than an adult.”

In other words, baby bird bodies had to beat the odds to find their way to a watery grave. And without that protection from animals and the elements, they wouldn’t leave much behind.

However this little bird made it to a lake, it almost certainly didn’t fly there: synchrotron analysis reveals that the cartilage in its sternum had yet to fuse into bone, which birds need to support them in flight.

With just that information, it’s hard to say exactly how altricial or precocial this particular species was. But the hatchling does help prove that the enantiornithes group had already developed a diverse range of parenting strategies.

“When we compare this to other specimens, we’re seeing an asynchronous pattern of bone formation,” Chiappe says. “Different species in the same group are forming bones at different times.” And that likely means that different members of the group were taking on unique ways of surviving, which would have helped them to radiate into increasingly diverse species.

“Certainly the developmental behavior of hatchlings 25 years ago is not going to solve any of the big problems of today’s society,” Chiappe says. “But it’s all about learning more about the evolutionary history of these animals. The next thing we need to do is find more hatchlings, just to gain a better understanding of how they developed. It’s the process of building an edifice out of building blocks, and this is a nice little block to add.”

Correction: A previous version of this article mistakenly listed the bird’s weight as three ounces. We regret the error.