These freaky baboon shrieks could push back the evolution of speech

These silly sounds are vowels, and that's a big deal 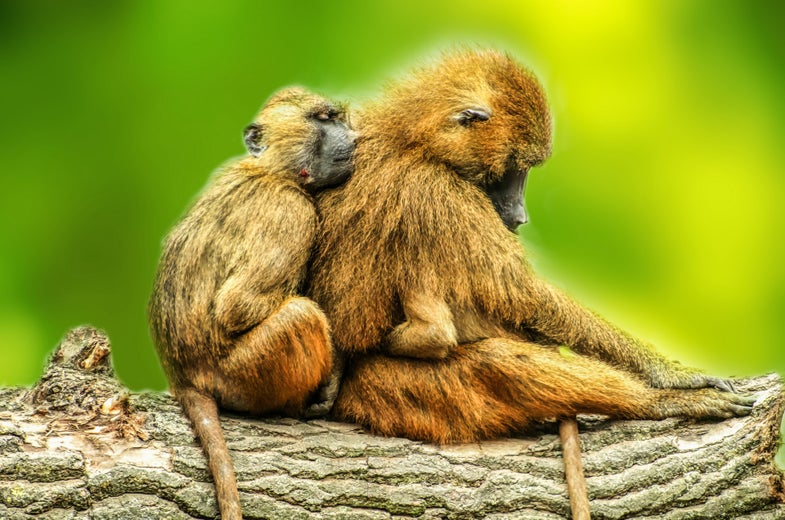 We like to think that human speech is special. It defines our species and separates us from those animals that we’d rather think of as inferior. The trouble is that it’s difficult to know when and how human speech arose because “language expressed via speech leaves no fossils behind.”

That’s how the authors themselves put it when they published a paper this Wednesday in the journal PLOS One that shows human speech capabilities aren’t quite as unique as we thought. Because they can’t study fossilized vocal anatomy, they studied a modern primate instead. Similarities in anatomy between humans and nonhuman primates today generally point to parts of the body that evolved in our common ancestor.

These researchers turned to one type of monkey in particular: baboons. And it turns out that baboons can make human-style vowel sounds—five of them. Scientists have long held up the theory that language arose 70-100,000 years ago by arguing that nonhuman primate anatomy prevented apes from making vowel-like sounds. Nonhuman primates like baboons have high larynxes, while the ability to produce vowel sounds is associated with low larynx position.

You can listen to the sounds for yourself. The authors uploaded compilations of each type of sound to their open-access article (six in total because the “wahoo” sound is divided up into the “wa” and “hoo” portions):

But it looks like the larynx doesn’t have much to do with it. Some animals with low larynxes don’t make vowel-like sounds. And human infants have high larynxes, yet can make all the vowel sounds that adults can. The ability to produce vowel-style sounds might have more to do with the muscle anatomy that controls the tongue and lips.

By dissecting baboons (don’t worry—they died of natural causes), this group of researchers found that baboon vocal anatomy is pretty similar to humans’. Their vocal cords are about the same size as an adult human’s, and their vocal tracts are the same length as a child’s. Baboon tongues also have the same muscles as a human tongue, they’re just longer—and they even move them along the same vertical and horizontal axes as we do.

If modern baboons can make vowel-style sounds, that suggests that the anatomical ability to speak evolved in our common ancestor with not just apes, but monkeys, which pushes the timeline back to about 25 million years ago. And that flies in the face of the dominant view of speech evolution.

One of the major differences between human and baboon vowel-like sounds was how similar the different baboon vowel sounds were. The frequencies of each sound in baboons’ vowel-like sounds cluster together, making them hard to separate from each other, which suggests that early human language may have had the same issue. Increasing separation between vowel sounds may have been a later development. Modern humans are capable of making very distinct vowel noises. Ancient humans may not have been.

So even though the human phonetic alphabet is far more complex than baboons’, we at least share some characteristics. We’re both omnivores, we live in groups, we communicate vocally, and males tend to be larger than the females. I’m just glad we don’t still share the whole sexual swelling thing…