These beautiful, terrifying maps show how hot we’ll get in 2090

It’s easy to be apathetic about rising global temperatures, but difficult when you imagine your own future backyard. 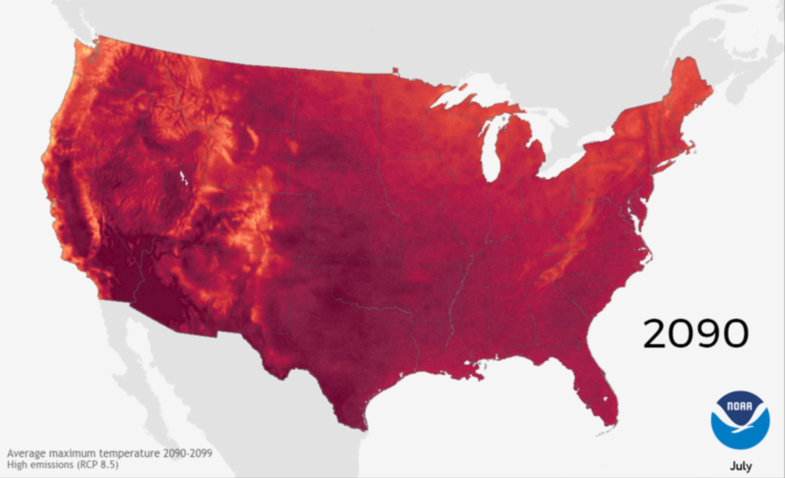 There are lots of terrible things about climate change. Birds will go extinct. Bits of Florida will be swallowed up by the sea. Coffee will taste worse. But let’s be honest: we are a self-centric species. When it comes down to it, the reason people have trouble caring about climate change is that it doesn’t feel like it will matter to us.

I don’t live in Florida, I probably won’t notice which birds don’t exist anymore, and I think diner coffee is just fine. Maybe you’re a coffee connoisseur in the Florida Keys, but for most people living in the United States, it’s hard to get too worked up over climate change—even if we know, intellectually, that it’s a huge problem. But there is one thing we all love to complain about: how freakin’ hot it is in the summer.

Heat and humans just don’t mix. We can layer up to deal with the cold, but our sweaty bodies can only cool us so fast when the sun is beating down. And despite the cold snap that hit much of the Northeast and northern Midwest in January, we’re increasingly headed for warmer winters. And hotter summers.

The good folks at the National Oceanic and Atmospheric Administration went ahead and made some maps to show us just how hot we’ll get.

That’s assuming we pursue fairly ambitious reductions in emissions and begin reforestation efforts. If we continue to pollute at our current rate and make no policy changes, July 2090 will actually look more like this:

The deep red covering most of the U.S. represents average daily highs of 100 degrees Fahrenheit or higher, reaching up tp 110°F. Right now, those kind of temperatures are reserved for Death Valley and southern Arizona. An average of 658 people a year already die from extreme heat, especially in states like Arizona and Texas—what happens when the whole country is that hot?

We can also look at how balmy winter could get. Even if we cut emissions, the average highs come alarmingly close to the 50’s in the mid-Atlantic, and even into the 60’s in Virginia.

Climate change is impacting winter first in a lot of the country (especially the farther north you go) because the snowpack shrinks, allowing darker surfaces beneath to absorb more heat. That may be great for construction crews working outside, but it’s bad news for farmers who rely on a solid frost to put their plants into hibernation. And it’s devastating for the North and South Poles, where animals are dying as their icy home melts away.

It’s hard to imagine the future when we read abstract stats like the infamous “2°C” number. It is, admittedly, a semi-arbitrary benchmark chosen for the sake of having a collective target: that we should aim not to exceed 2 degrees Celsius of warming on average across the planet. It’s the benchmark that climate scientists and newspapers use as a reference point for just how screwed we are. Discussing in terms of a global average is useful when you need to talk about, well, the globe, but it’s just not useful when a single person wants to know how climate change will impact them. It’s hard to imagine what three-ish more degrees Fahrenheit feels like averaged across an entire planet and 365 days.

But it’s easier to imagine stepping outside your house into a 105°F day. Or maybe it isn’t, because you’ve never lived in a place where it gets that warm. That’s kind of the point: it’s a drastic change for most people in the U.S. As soon as 2050, we’ll already have scorching heat across most of the country that will damage our economy and literally keep us up at night (heat makes it harder to sleep).

Let’s try to avoid that future. You can be an active participant in the fight against climate change. You can also campaign your legislators to push for policies that will prevent our globe from warming at such an alarming rate. And the next time you catch yourself feeling apathetic about climate change, picture a summer when it’s too hot to sit outside. Picture 100°F and humid. Then try not caring.