These ultra-efficient systems could massively reduce our emissions from heating and cooling buildings. 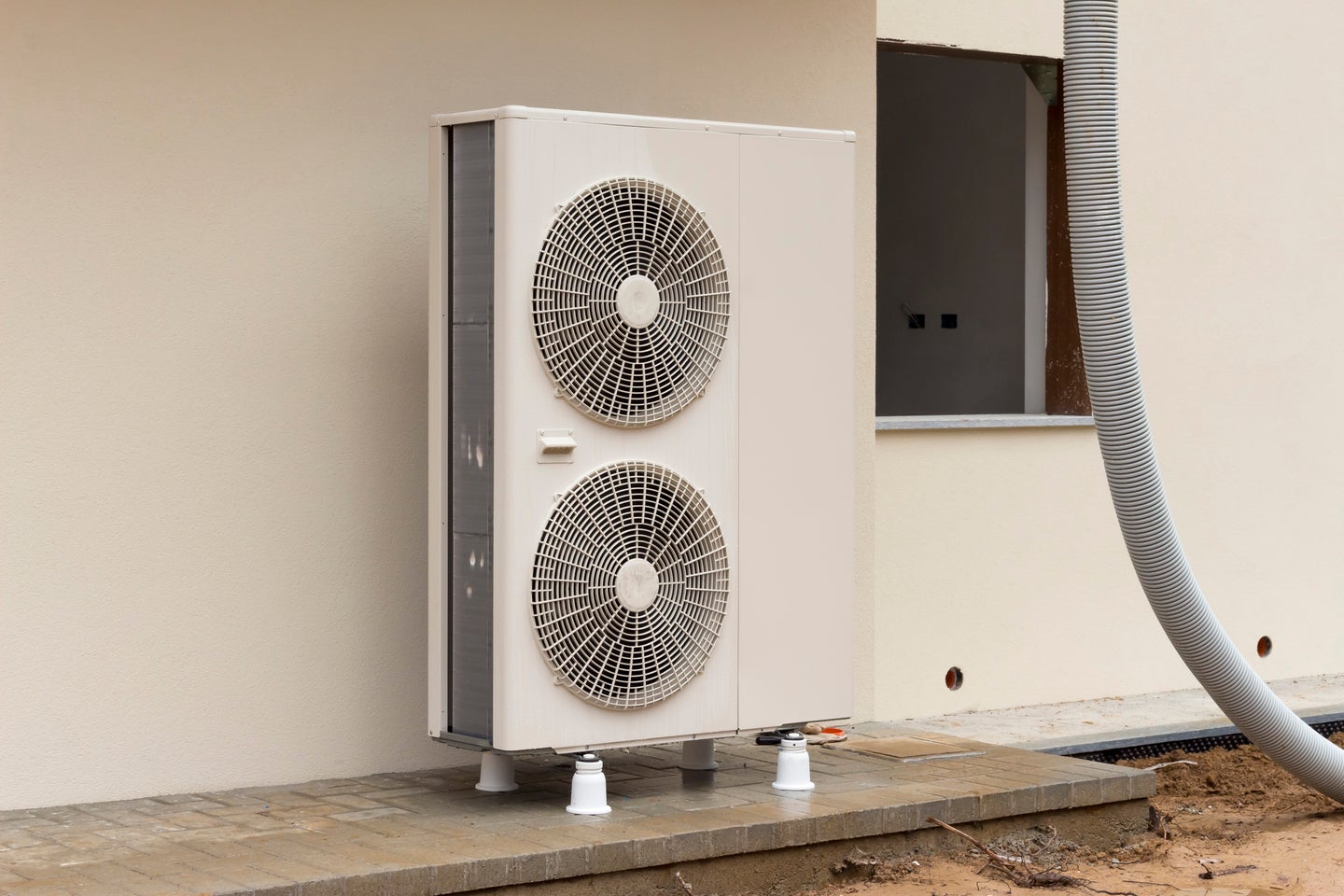 Many states have made ambitious goals to cut their greenhouse gas emissions in an attempt to meet the targets established by the Paris Climate Agreement. California wants to be carbon neutral by 2045, New York is aiming for a 100 percent cut from 1990 emissions by 2050, and Florida has committed to an 80 percent reduction over the same time frame.

But if we’re going to have any shot at meeting these goals and averting some of the worst consequences of climate change, we need look within—within our buildings, that is. Buildings are the source of 40 percent of U.S. greenhouse gas emissions, and more than a third of those emissions comes from heating, cooling and ventilation. Heating our indoor spaces is responsible for a tenth of annual emissions. Most structures today use natural gas, oil, or propane to stay warm, creating millions of small sources of carbon pollution with a big cumulative punch.

Luckily, there’s another option already available: heat pumps. Some suck heat from the air, others from the ground, and they’re all more efficient and less polluting than your clunky gas furnace.

There’s nothing new about the fundamental technology of heat pumps. Your fridge is a heat pump. It sucks out heat from inside and pushes it out—that’s why the compressor at the back of it feels hot. Even at cold temperatures, there is heat in the air, and the vapor compression cycle that fridges and air conditioners use essentially concentrates that heat and moves it away. It warms up one space to cool another.

Heat pumps are basically a reversible air conditioner. When it’s cold indoors, they can suck heat from an outside source—the air or the ground, in the case of geothermal units—and use it to warm up air or water for hot water pumps inside. When it’s too hot inside, they can move that heat outside.

Air source heat pumps concentrate heat from outdoor air and use it to heat indoor spaces, and function similar to an air conditioner when it’s hot inside. Geothermal, or ground-source, heat pumps also have thermodynamics on their side for heating and cooling. From 30 to a couple hundred feet below the surface, the Earth maintains a fairly constant temperature year round. In the U.S., that temperature is between 45 and 75ºF depending on where you are, with many states falling right in the middle of that range. These temperatures are close to those comfortable for humans, and the heat pump can take advantage of this for energy-efficient heating and cooling.

Geothermal pumps use a loop of pipes filled with fluid—mostly water with some added antifreeze—to tap into the deep ground’s ideal temperatures. In cold months, the ground is warm relative to the surface, so the pipes move heat into a building, where the heat pump appliance—the unit indoors that blows out air—can use it to warm air or water. In the summer, when the ground is cool relative to the air above, heat is pumped away from a building and into the ground.

Heat transfer is inherently more energy efficient than generating heat, which is why heat pumps use much less energy than a conventional furnace. In fact, all heat pumps are technically over 100 percent efficient, meaning that it produces more energy as heat than it consumes for electricity. Meanwhile, even an especially efficient gas heater might only reach 90 percent. For that reason, according to the U.S. Department of Energy, heat pumps can cut energy bills by 65 percent compared to traditional HVAC systems.

In an experiment, Jeff Spitler, a mechanical engineering professor at Oklahoma State University studying building energy use, found that a geothermal system was over 60 percent more efficient in heating and cooling a commercial building than an air source heat pump. He adds that there needs to be more research into the efficiency of different heat pumps systems.

Scaling up heat pumps holds a lot of promise for curbing climate-warming emissions. In a 2018 study prepared for the Natural Resources Defense Council, researchers estimated that switching to heat pumps for space and water heating could cut emissions from California households by about half. With the massive amount of energy used across the country to heat and cool homes, a nationwide shift would also foster large cuts to greenhouse gases. The United States Mid-century Strategy for Deep Decarbonization, an official document from 2016 laying out how the country would meet the Paris Agreement (before the Trump Administration withdrew the U.S. from the agreement), specifically mentions heat pumps as part of strategies for reducing emissions from buildings. “Geothermal heat pumps use electricity to provide heating, cooling, and water heating to buildings at higher energy efficiency than conventional heating and cooling air conditioning systems,” says Xiaobing Liu, a geothermal heat pump researcher at Oak Ridge National Laboratory. “Even though we still use electricity generated at power plants, geothermal heat pumps can still reduce the emissions related to electricity because of their efficiency.”

Heat pumps may also resolve a critical problem with wind- and solar-based utility systems: the variability of the energy supply caused by fluctuating winds and sunlight. Liu explains that geothermal heat pumps systems can be designed to store extra energy as heat underground, saving it for when the windmills and panels aren’t keeping up with energy demand. “The system will not only heat and cool, it can connect with the grid,” he says. “So the grid will not have that surge [from variable energy production].”

Firing up the market

Right now, 10 percent of U.S. households use heat pumps, most of which are air-source. Geothermal heat pumps specifically make up a measly one percent of the HVAC market.

In a 2017 study, Liu and colleagues identified the main barriers to increasing that market share. The most signficant is high costs. In a commercial space, a geothermal system can cost $20.75 per square foot of building space, and Liu estimates the cost for a three-bedroom house is between $9,000 and $15,000. That’s because drilling holes in the ground for the piping is expensive, as is the piping system itself. “It could be double the cost of a conventional system,” says Liu. “That is the biggest barrier.”

Additionally, Liu explains there’s a chicken and egg problem due to the small market for ground-source pumps. Because there’s little investment, there’s little research being done on how to improve and scale up the technology. And because the market is small, people aren’t investing in its development. “All new technologies always have high costs,” he says, adding that while geothermal heat pumps aren’t new, there’s been very little development on the technology in recent years. “But they become cheaper through improvement.” And there’s the “soft costs” of educating consumers and training contractors about heat pumps.

While the movement is still small, a few companies have started to address these issues. Hannun at Dandelion Energy says they’re able to lower the initial costs by essentially combining what were once separate trades—drilling and plumbing—into one. Without a company like Dandelion, a homeowner would have to work with several contractors to do an installation. It’s similar to how solar became cheaper after becoming its own distinct trade, combining roofing and electrician skills to create unified companies that could provide the whole service. Dandelion also offers financing, and Hannun says a typical homeowner in New York pays $135 to $140 a month over 20 years for a geothermal installation, a system that lasts 25 years. In the Northeast, that’s often less than homeowners pay for their heating fuel, so their monthly heating cost lowers after the installation, after which they’re only paying for a small amount of electricity to run the heat pump.

Private utilities companies, which already run underground systems for natural gas, may also have a role to play in the transition to electric heating and cooling. In Massachusetts, radio station WBUR recently reported that a climate change nonprofit, Home Energy Efficiency Team, worked with a local utility to consider replacing aging natural gas lines with geothermal piping. Now, the utility company has proposed three pilot projects to test a “networked system,” in which they manage the pipes underground while homeowners and businesses own their own heat pump in buildings. Such a system could lower costs for property owners and make it easy for them to connect to geothermal heating and cooling.

In most places right now, though, it’s still cheap and easy to tap into natural gas for heating. For example, in New York, utilities are required to connect homes within 100 feet of natural gas lines at no cost to the homeowner. “If you’re a new technology it’s hard to compete with free,” says Hannun. “We have to examine the policies that are in place today and ensure we’re incentivizing what we want.”

With government incentives and policies, and more investment and workforce training, heat pumps have the potential to help us meet our emissions goals. Hannun, for her part, thinks we’re seeing the beginning of a revolution. “I co founded Dandelion three years ago and even in the time it’s existed we’ve seen a tremendous shift,” she says. “So I feel like the movement is gaining momentum.”