How to build a house that stays cool without AC

A guide to help your house face the heat. 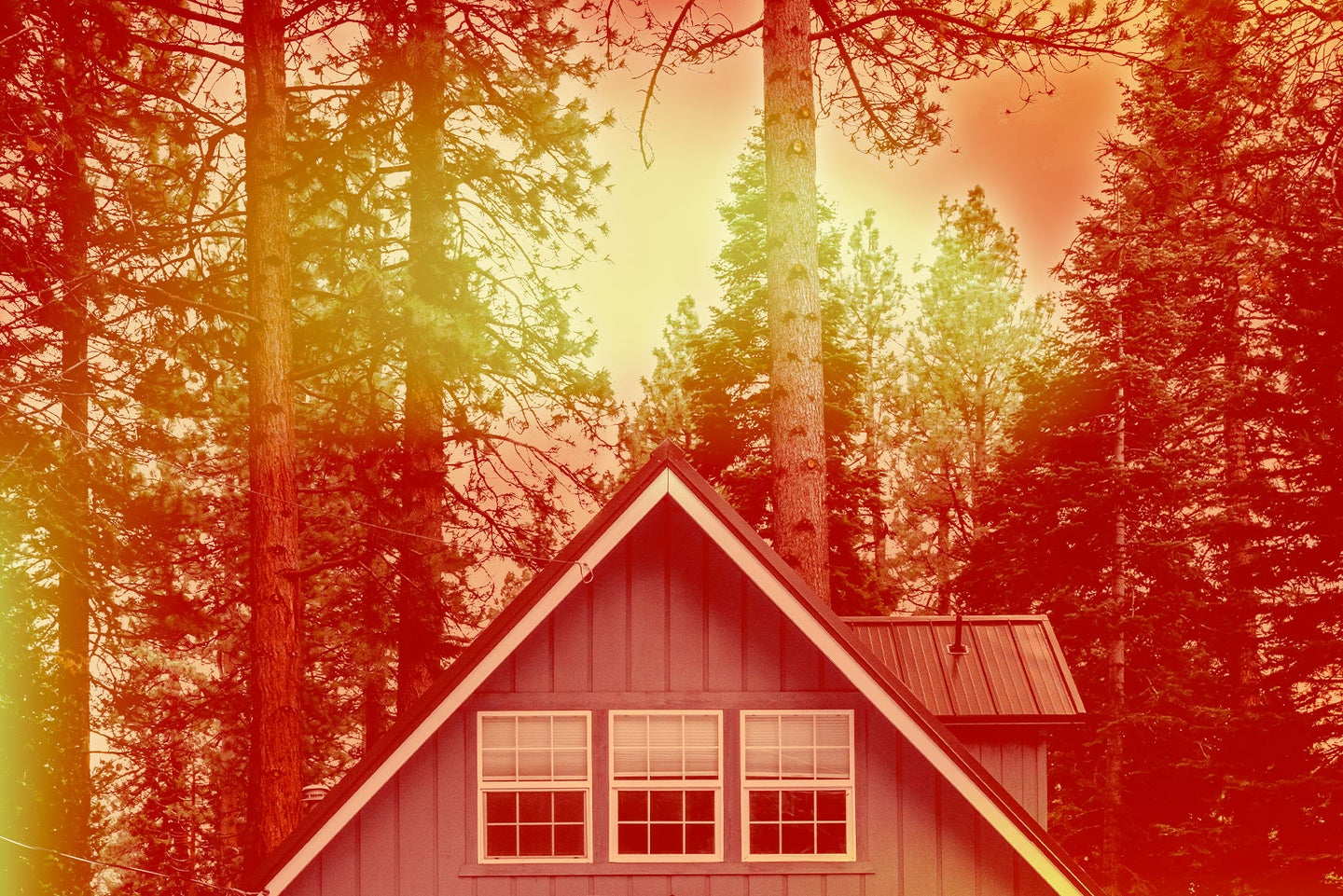 For more than a thousand years, windcatchers have existed in and around the Persian Gulf. These architectural towers are perfect examples of natural ventilation and passive cooling—ideas that have become increasingly relevant in sustainable design. As architects and environmentalists alike seek to move away from conventional energy-intensive heating, ventilation, and air conditioning systems, windcatchers are a prime example of the marriage between architectural design and the environment as a solution to our new climate realities.

If recent memories of sweltering summers aren’t enough motivation, data from the Environmental Protection Agency has shown that most states in the contiguous US can only expect the digits to climb on their thermostats. Eight of the top 10 warmest years on record in the US have occured since 1998, with 2012 and 2015 taking the spots for first and second. And there are ways to combat the problem that don’t involve cranking the A/C.

Keeping cool over the summer is all about controlling how all the elements in the house interact with solar energy.

“Passive solar design… is all the things that you can do when you’re designing a building to basically naturally condition it and make it a better place to live,” says David Wright, an architect who has been in the sustainable design movement for nearly five decades. The principles of passive solar design are core to building houses that can both keep us comfy and prevent power bills from skyrocketing.

Not all climates are created equal. Building in Boston versus in Austin will have its own unique set of restraints and challenges. As we face environmental threats of all kinds from wildfires in the west to hurricanes in the east, our homes must be built with the impending climate crisis in mind.

In an ideal scenario, your home will be oriented in such a way that it can conveniently take advantage of the naturally occurring wind patterns. By figuring out which way the summer breeze blows, you can better plan where entrances and windows will be placed to naturally cool your house.

Before we even get inside the house, it’s beneficial to try and protect the exterior from direct sunlight. If you live in a place surrounded by trees, they provide excellent natural coverage. Deciduous trees in particular, trees that shed their leaves seasonally, are effective at blocking the sun out during those ice-cream-and-lemonade months, then letting in the winter sun when you want those warming rays.

If the topography allows it, you can even build your house so that, in the most tender of terms, it is earth-sheltered. These homes can either be entirely underground or have structures like walls or roofs built against soil. This is a particularly energy and cost-effective (at least in the long term) way of combating extreme climates. In the absence of a convenient hillside, you can install protective coverings like canvas, awnings or overhangs to prevent the sun from hitting the roof and walls of your house directly. Getting the depth of the overhang is crucial: Too deep and you lose your winter sun, too shallow and you’ve got too much summer heat. The proper measurements will depend on your location. You can hazard those calculations yourself using many available tools and guides online or skip the searching and ask an architect for the specifics of your house.

Windows are perhaps your most important tool when it comes to ventilating and cooling your home. Specifically, cross-ventilation relies on the concept that by creating windows of similar sizes opposite each other: air is sucked into the house, cools your body by helping the heat  evaporate off it, and then exits through the opposite windows. This creates a nice natural breeze. The key to creating good cross-ventilation is figuring out where the wind is coming from.

“You want to make sure you open windows on the west and the south where you can pick up those winds and then you need to get the wind back out,” says Vivan Loftness, a professor of architecture and former head of the school of architecture at Carnegie Mellon. “The more windows you can open, the more flow you’re going to get through the house. But if you want to speed up the wind, there’s a general rule of thumb that says you should have fewer open on the windward side and more open on the leeward side.”

[Related: Five ways to stay cool without blasting the AC]

Loftness is referring to the Venturi effect, a principle used in fluid dynamics which means that the speed of wind will increase if it is squeezed through a narrow opening, like wind tunnels in between skyscrapers. As the wind is drawn into the house through a smaller opening, it speeds up inside of the house, making the breeze feel stronger.

The location of the windows are also very important. Providing shade for windows that are south and north facing is much easier than those that are eastward or westward. That’s because as the sun sets across our skies from east to west, it shines through windows at much lower angles during the afternoons.

“Unless you have the most spectacular view, it’s inexcusable to put people into a condition where they’re getting huge amounts of solar heat late in the afternoon when it’s extremely hot already,” says Loftness.

By using some fundamental principles of chemistry and physics, you can also help redirect the airflow in your house. Using what designers call the stack effect, you can draw hot air towards the top of your house and move it away from pooling nearer the ground where people live, eat and sleep.. Hot air rises because it is less dense than cooler air and so, creating a ventilation tower through high ceilings and a narrower opening, funnels the hot air into the tower. This motion pulls cooler air into the lower living spaces since it is more dense and will remain closer to the ground. You can create this tower by either placing windows higher up, like clerestory windows (positioned near the ceiling) or skylights, or simply by creating spaces like atriums that have higher ceilings than the rest of the room. The greater the height difference between the peak height and the ground, the greater the effect. If you already have an attic, you can also create an attic hatch. In order to make sure that you’re not just recycling stale air, crack open a window to introduce some fresh air. (Don’t forget window screens for those pesky bugs.)

Insulate your roof. And while you’re at it, paint it too. Insulating your roof and the attic prevents all the heat that builds up as sunlight hits the roof from entering your house. It is an added layer of protection against the summer sun. Building your roof out of reflective materials is another way of making sure that less heat is absorbed through the roof. Like white linen on the beach, this has historically meant using materials that are lighter in color. But white roofs are not necessarily first on the list of most homeowners’ aesthetic desires.

There’s a reason images of Mediterranean villas and Arabian desert abodes flood our minds when we think of hot sweltering summers. Those houses have traditionally always been built to withstand high degrees of warming. You’ll also notice a significant lack of wooden structures and attics. That’s because heavy, thick materials like concrete have a lot more thermal mass, which allows them to store excess heat during the day, which is then removed later at night by cool air. Through this process, materials like concrete, stone and brick are better at passively cooling homes because they essentially have a lot more capacity to store the heat that would otherwise get transferred to the air inside the house.

Design for the future

We’re not just designing for a few unusually hot summers—the climate change thermometer is only ticking upwards. The houses we build now will need to withstand a lot more heat in the decades to come. Designing them to stay cooler in extreme temperatures is just one of the steps we can take to alleviate our demands on polluting energy systems. As our designs become more clever and environmentally conscious, we can rely on artificial cooling and federal energy systems less and less.

As Loftness explains, when we begin to design sustainability, we begin to design resilient homes. Resiliency is going to become increasingly important as storms and fires threaten how reliable our power is going to be. We might find ourselves in situations without air conditioning soon enough, and rather than going cold turkey then, we could design houses that don’t rely on artificial cooling now.

“Imagine the power goes down in your house for a week and your home has been designed with a central air conditioning system and it hasn’t doesn’t have very good shading, if any,” she explains. “In many cases, many of the windows don’t even open. You can open the front door and maybe there’s a window or two that has been sealed shut for the last 10 years. You would be very hard pressed to stay in that home in the afternoon, or even at all. And so, resiliency is an important word for us to understand because the power is going to go out on us for lots of reasons.”