Mosquitoes that carry dengue might not survive rising temperatures

Infected bugs can’t take the heat, and this may limit the spread of dengue fever. 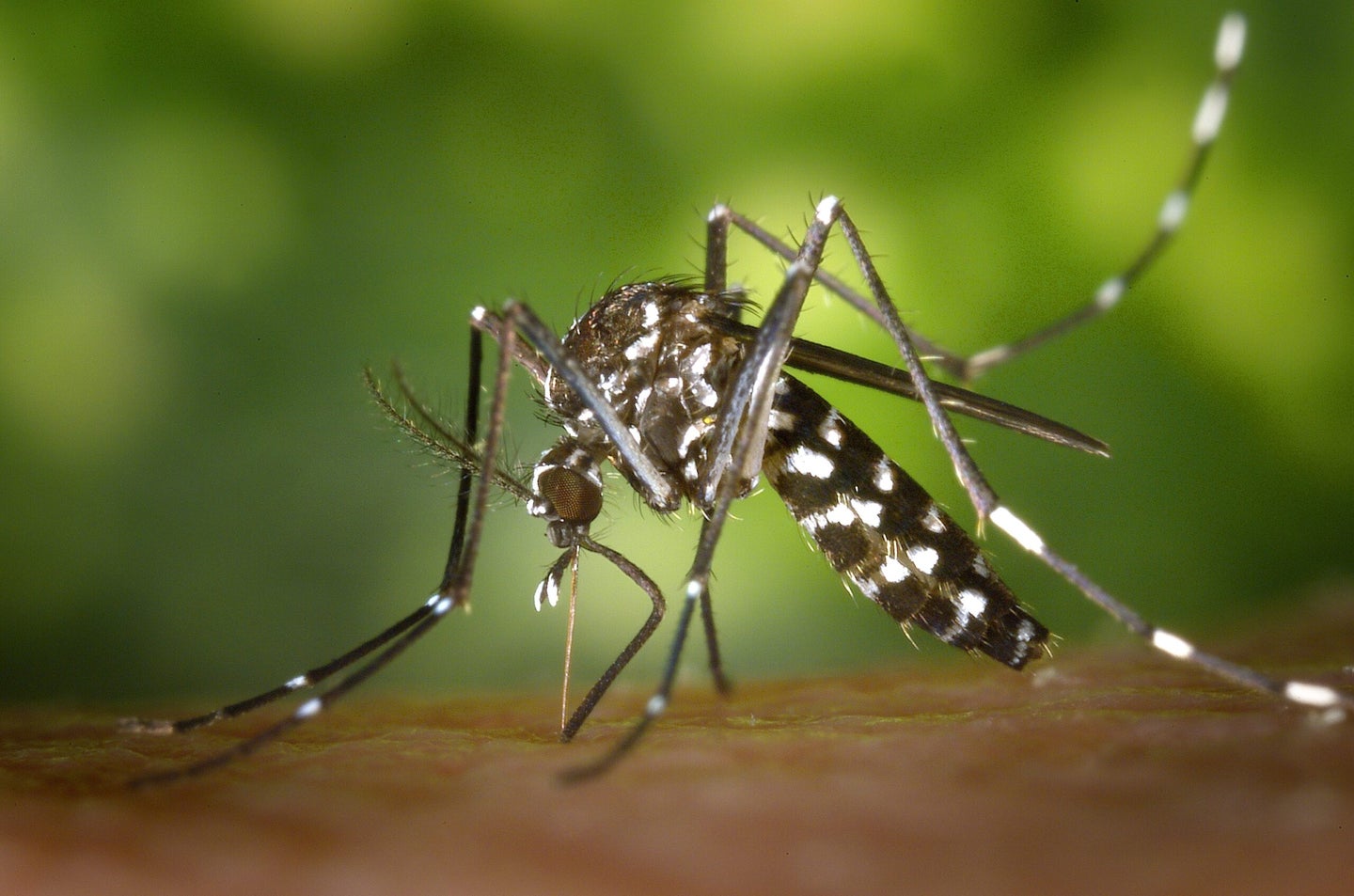 Mosquitoes carry many diseases, and climate change could expose many more people to infection. Pixabay
SHARE

Disease-carrying mosquitoes are expected to venture into new territory due to climate change and urbanization, but new research suggests that higher temperatures may curb the spread of at least one infection: dengue fever.

A study published July 22 in PLOS Neglected Tropical Diseases shows that mosquitoes carrying the dengue virus were more sensitive to extreme heat than their uninfected peers.

“It might mean that any mosquito carrying dengue in an extra-hot area, or an area experiencing these sorts of heat spikes, might die,” says Elizabeth McGraw, head of the biology department at Penn State and a coauthor of the findings. “And that’s actually a good thing, because it might reduce the amount of dengue in mosquito populations at the extreme edges of the mosquito’s distribution.”

The effects of global warming, including higher average temperatures and more frequent heatwaves, will cause “dramatic shifts” in the ranges of infectious diseases, she and her colleagues noted in the study. The geographic range of the Aedes aegypti mosquito, which transmits the viruses responsible for dengue, Zika, chikungunya, and yellow fever, is currently expanding. A. aegypti thrives in warm and urban environments, breeding inside and near human dwellings. By 2050, it’s predicted that half the world’s population will live alongside the insects.

The A. aegypti mosquito survives best in temperatures between 15 and 35 degrees Celsius (59 and 95 degrees Fahrenheit). This means that, while the bugs are likely to invade many historically temperate regions, other areas may become too hot for them to handle.

“Clearly in some areas mosquito distributions will contract, and in other areas they will expand,” McGraw says. “What our study is looking at is really an extra piece of the puzzle, which is how one particular virus…might also impact the mosquito’s ability to respond to temperature change.”

Every year, the virus in question causes an estimated 390 million cases of dengue fever and 22,000 deaths. One strategy that scientists are investigating to control dengue and other damaging viruses is to infect their mosquito hosts with the bacterium Wolbachia pipientis.

[Related: How to keep mosquitoes away]

It’s not entirely clear how Wolbachia impairs viral replication inside the mosquitoes, McGraw says. It’s possible that the two microbes interact directly, or that Wolbachia prompts an immune response or somehow alters the mosquito’s physiology such that its cells become hospitable to the virus.

There’s evidence that releasing infected mosquitoes, then allowing the bacteria to spread into the wild mosquito population, can quash disease transmission. Last month, scientists reported that the incidence of confirmed dengue cases was 77 percent lower in zones where Wolbachia-carrying mosquitoes had been released in Yogyakarta, Indonesia.

But there’s a catch: McGraw and her team found that mosquitoes infected with the Wolbachia bacterium also seem more susceptible to the heat. “It might mean that we have to be careful about deploying Wolbachia in the hotter areas, that it might struggle with efficacy if having Wolbachia there actually leads to greater death of the mosquitoes during heat stress.”

To find out how toasty conditions would affect mosquitoes with and without their microbial passengers, McGraw and her team placed the insects in glass vials and submerged them in water heated to 42 degrees Celsius (107.6 degrees Fahrenheit). This ordeal was intended to reflect an unusually hot day that mosquitoes might face in the wild.

The researchers found that mosquitoes infected with Wolbachia or dengue virus passed out and fell to the bottom of the vial up to 2.5 times or five times faster, respectively, than uninfected insects. Intriguingly, the time it took for a mosquito to go belly-up wasn’t dictated by the amount of bacteria or virus it was carrying. What’s more, mosquitoes carrying both infections didn’t succumb more quickly than ones with a single infection.

“There’s some threshold going on here where you just need some amount of either of these microbial agents and it changes the mosquito’s physiology or ability to cope with heat stress,” McGraw says.

This effect may limit the geographic range of the dengue virus, she and her team concluded. However, McGraw says, it’s not clear yet which areas will face increased or lessened risk, and therefore where deploying Wolbachia will be most effective. More experiments are also needed to examine mosquitoes in different parts of the world and in more realistic environments, where mosquitoes could take measures to keep from overheating.

McGraw and her colleagues next plan to investigate how microbial infections lessen the mosquitoes’ ability to cope with heat, and whether the findings can be applied to other types of dengue virus, Wolbachia strains, or mosquito populations.

“​​The global landscape of infectious disease is likely to change over the next few decades, in part due to climate and in part due to human-associated activities…so I think it’s really important to get a handle on all these interacting organisms,” McGraw says. “Trying to understand how all of those pieces of the puzzle come together…will give us a more accurate picture of what infectious disease is likely to look like in the future.”