30 percent of the energy sent to Earth bounces back into outer space. Climate change could upend that. 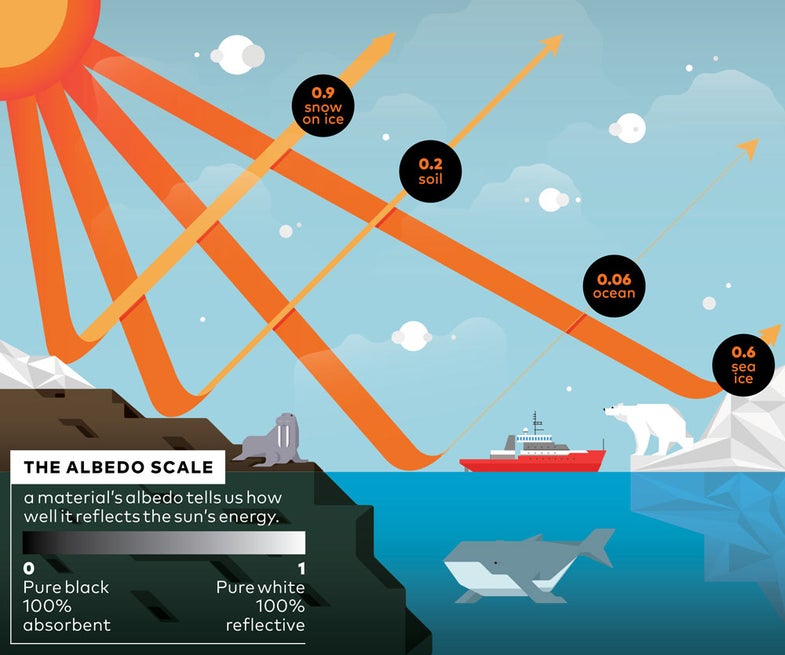 If you’ve ever made the mistake of wearing a black shirt on a sweltering day, you know that dark colors absorb the sun’s heat, while light colors reflect it. Our planet works the same way. White surfaces, like the snow on the world’s glaciers, reflect the sun’s rays back toward space. Darker ones, like forests and oceans, absorb more heat. Overall, about 30 percent of the energy sent to Earth bounces back into outer space, stabilizing the global thermostat. But climate change could upend that balance.

Scientists developed a ratio, called albedo, to describe just how much solar energy any given surface reflects. Albedo can range from zero to one: zero is a perfect absorber, an impossibly dark substance that takes in 100 percent of the sun’s energies, while one is a perfect reflector, an incredibly bright material bouncing all that energy back. For example, a shirt with an albedo of 0.1 is 10 percent reflective and 90 percent absorbent.

Now climate scientists are looking into how Earth’s albedo fluctuates over time. They’re also investigating whether it will decline as our climate changes. If our albedo takes a nosedive, the same principle that currently helps keep everything in balance could make the world heat up even quicker in the future.

A warming planet causes glaciers to shrink and sea ice to melt, revealing darker and more heat-absorbent surfaces that reduce Earth’s albedo. At the same time, pollution—in the form of black and gray soot—lands on ice sheets and makes them darker. This allows ice to absorb more of the sun’s heat, melting it more quickly.

Driven by this cycle, the planet could take in too much energy from the sun and not cast enough back. As global warming continues, it might be even harder for Earth to keep its cool.