It may be time to start simply moving out of the way. 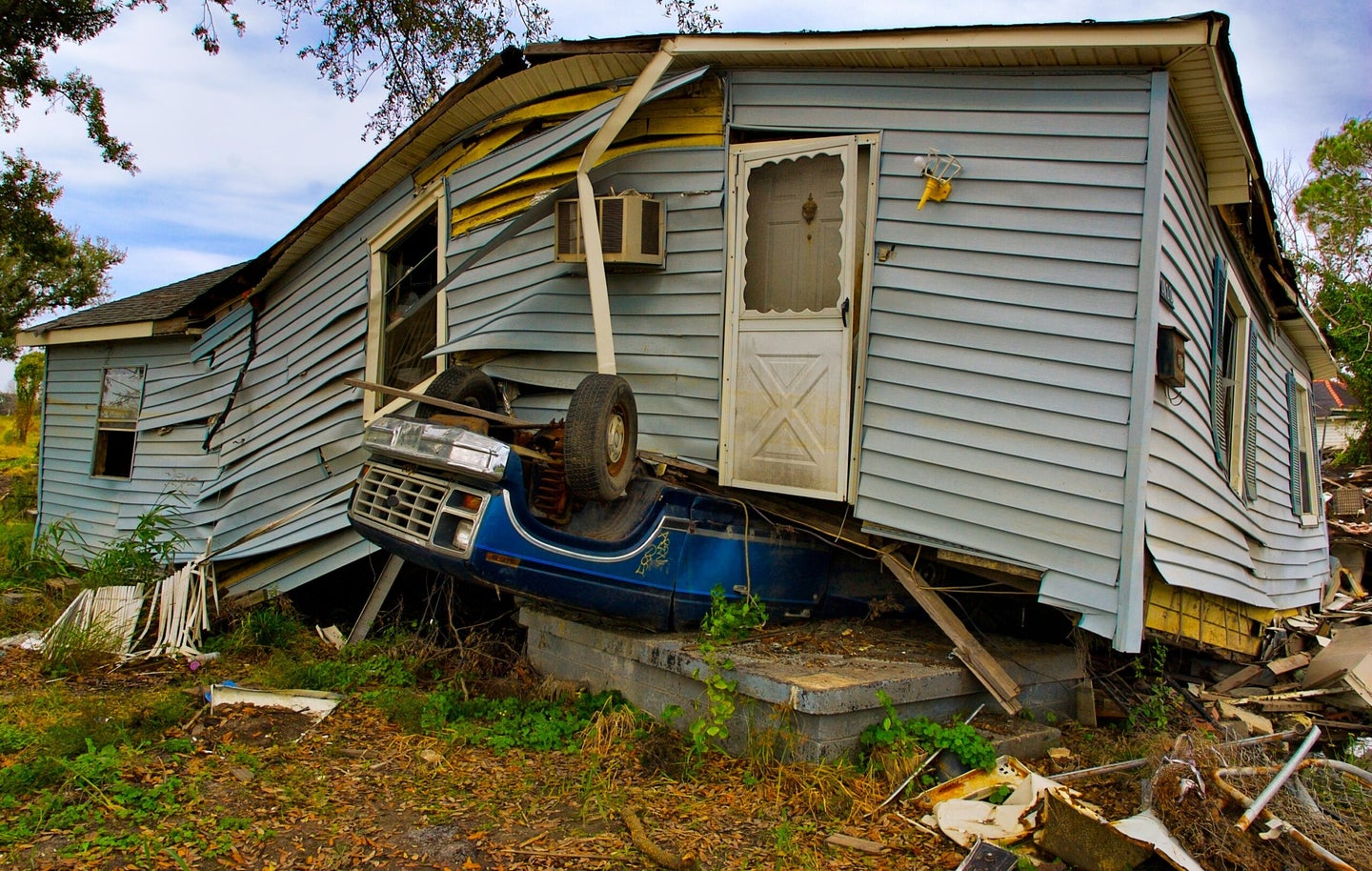 We may have to start getting out of the way of Mother Nature. John Middelkoop/Unsplash
SHARE

Heat waves that buckle streets. Flash floods that wipe out entire towns. Wildfires that create their own weather. Even for the most plugged-in scientists, this summer’s climate disasters have come as a shock. Experts who study the climate have been ringing the alarm bells for years about the relationship between global warming and extreme weather, but each new catastrophe still seems to catch us off guard. Our homes, streets, and power grids aren’t prepared.

Why are we so unprepared for these disasters, and what can we do to protect ourselves from them in the future? The answer lies as much in the built environment as in the atmosphere. The cityscapes and towns we live in were designed for an era of weaker and more predictable weather, and now, as warming ratchets up Mother Nature’s intensity, the artificial infrastructure around us is falling apart at the seams.

The solution to this infrastructure catastrophe, meanwhile, is far from simple: in some cases, we may be able to retrofit our cities for an era of climate chaos, but in other places the only option will be to retreat to safer ground.

That’s because the key thing about natural disasters is that there is no such thing. What we call a “disaster” occurs when a natural force collides with a man-made environment, but there is nothing disastrous about environmental forces as such. We view phenomena like rain and fire as harmful because we’ve built houses and streets that are vulnerable to their impacts, but they were around long before we were.

As construction technology took massive leaps over the course of the nineteenth and twentieth centuries, developed countries like the United States tended to forget that crucial fact. We adopted an attitude of dominance over nature, reframing the ecosystem as something that could be tamed and bent to our will—“Pridefully, man acclaims his conquest of nature,” boasted former Interior secretary Harold Ikces at the 1935 dedication of the Hoover Dam.

We can see the marks of this prideful conquest all over the United States, from California to Florida. In the West, for instance, the federal government pursued a policy of total fire suppression for decades, but didn’t realize that stamping out small blazes would cause ample flammable material to pile up on forest floors. Millions of people moved to the desert and tapped the serpentine Colorado River for their drinking water, but no one considered what would happen if a drought caused that river to run dry. Real estate developers erected large condo buildings on the sinking barrier island of Miami Beach, but didn’t think through how those buildings would stand up to decades of rain and salty air.

It’s not as though the people who designed this infrastructure were unaware that weather existed, of course.

“If you talk to any civil engineer, you’ll understand that climate is directly brought in, during any infrastructure design,” says Vivek Shandas, a professor who studies climate change and urban planning at Portland State University in Oregon. “We design things for a specific amount of water to move [through them], or for a threshold of maximum temperatures.”

[Related: What extreme heat means for the future of the Summer Olympics]

The problem, says Shandas, is that now the numbers are changing—cities are seeing more intense rain events than they once did, and heat waves are breaking climate models. The calculations that engineers used when they designed our infrastructure no longer apply to the post-climate era.

This gap between expectations and reality was all too visible in New York City last month, when the remnants of Tropical Storm Elsa dumped three inches of rain on the city and flooded the subway system. The underground stations were designed to pump out invasive water twenty-four hours a day, but the drainage system can only handle so much water at one time. The pop of precipitation overwhelmed the vents and caused murky water to back up on the platforms.

The same thing happened in suburban Detroit last month when a seven-inch storm submerged an Interstate highway that ran through the city. The highway had been built below street grade to spare surrounding neighborhoods from noise impacts, which meant the low-down streetscape relied on a series of pumps to keep water out. The freak rain event more than overwhelmed those pumps’ capacity, turning the freeway into a sluggish brown river.

Richard Norton, a professor at the University of Michigan who has studied climate change impacts in the Great Lakes, says he was “not surprised at all” by the flooding.

“We have an aging infrastructure that’s breaking down right at the end of its lifecycle,” he says, “and it’s just not geared to handle the amount of inflow that we’re going to start experiencing more. It’s not unlikely that that will happen again.”

Solving the problem of climate change, then, will require not only a transition away from fossil fuels but an enormous transformation of how and where we live.

The urgent need for this transformation was on display for Shandas just last month, when he and his family rode out the unprecedented Pacific Northwest “heat dome.” Shandas watched in horror as tram cables melted and streets buckled under the sun; like thousands of other people in Portland, he scrambled to find an air conditioner before temperatures reached their peak.

“I hope this is a wake up call—we know this is here,” says Shandas. The heat wave should be a warning to cities like Portland that they need to adapt their physical and human infrastructure to climate change, and sooner rather than later.

He says that the easiest place to start is with education and awareness, something that is often lacking when it comes to heat waves in non-tropical areas; early-warning systems will help prevent desperate last-minute runs on air conditioning units.

In the long term, Shandas says, heat-vulnerable cities should invest in local cooling centers that can give residents a reprieve. The local government should also work to ensure that every neighborhood has adequate shade and green space, which is often lacking in low-income communities—Shandas and his fellow researchers took temperature measurements during the heat-wave and found that poorer neighborhoods in Portland were more than ten degrees hotter than wealthier ones. Farther down the road, he says, the city also needs to upgrade its power grid to ensure that high demand during heat events doesn’t short-circuit local wires.

When it comes to disaster events like the heat dome, such changes could literally save lives—there were an estimated 100 deaths in Oregon during the sweltering week, most among elderly residents who didn’t have air conditioning.

“Instead of battling Mother Nature and losing inevitably, which is what will happen, it is time to move back.”

Zoom out to the entire country, though, and these upgrades become very expensive. If you leave the house and take a five-minute trip to the grocery store, you’ll pass countless different kinds of infrastructure, all of which are vulnerable to extreme weather. There’s your house itself, the power lines that give you electricity, the water lines that keep you hydrated, and the wastewater systems that whisk away your poop, not to mention the street you drive on or the subway you ride to work.

The question for climate experts is whether it’s worthwhile to invest in such fixes everywhere. It might be feasible to adapt a temperate city like Portland for the era of climate change, but other areas of the country face far greater risk. Think of coastal cities like Miami, where the sea level is rising by a few millimeters a year, or mountain cities like Paradise, California, which will face perennial fire risk.

Climate experts have come to believe that in communities like these, the best solution might just be to move people out of the way.

“We’re hitting barriers where it just probably doesn’t make sense to try and keep rebuilding and bending nature to our will,” says Norton. “It’s building in the [fire-prone] wildland-urban interface, it’s building in places where you have to go to groundwater to water crops, it’s building in floodplains. Instead of battling Mother Nature and losing inevitably, which is what will happen, it is time to move back.”

Scientists have a term for the coordinated withdrawal from risky areas—it’s called “managed retreat,” and it’s gaining more and more traction among policy experts. Retreat looks different depending on what kind of disaster you’re trying to escape. In fire-prone California, for instance, the state has required homeowners to clear flammable vegetation and leave kindling-free “defensible space” between their homes and the forest. In flooded cities like Houston, the county government has bought out flood-prone houses and given the owners money to move to higher ground. Meanwhile, in the parched state of Utah, at least one town has prohibited new development that would strain the town’s water supply.

At least for now, though, there aren’t many large-scale examples of this policy in the real world, and the federal government has yet to throw its weight behind the idea.

[Related: These Staten Islanders lost their neighborhood to Sandy. Here’s why they’re not taking it back.]

“There is no federal climate adaptation strategy or program,” says Susanne Moser, a consultant who has been studying climate adaptation for more than two decades. “There’s no overall guidance. It is up to the localities where the impacts are being felt,” she says, “and they are several orders of magnitude short of the cash to actually implement some of the things they want to do.”

Managed retreat is also controversial among private homeowners who want to protect their property from what they see as government intrusion. In North Carolina, for instance, a beach town had to sue to remove one last resident from an eroding beach; in one wealthy California town, meanwhile, local officials dropped a managed retreat plan after backlash from beachside residents. Francis Suarez, the mayor of Miami, has assured residents that he wants to ensure that “​​we never ever have to retreat.”

There’s a reason that conversations about managed retreat are so difficult, says Moser, and it’s that they cut against the optimism that’s at the heart of scientific innovation. We just don’t want to believe that there’s something stronger than us out there.

Nevertheless, she says, it’s far past time to start thinking about changing our behavior in addition to our physical infrastructure. We need scientists and engineers to help solve the climate crisis, but we can’t build our way out of that crisis—at least, not everywhere.

“Cooling centers, insulation of houses, those are all forms of adaptation technology,” she says, “and those are well and good, but what are the attitudes? Is it, ‘I can live on the coast, no matter what, and everybody is supposed to cater to me and pay for that?’ Or is it that we may be asked to be a little bit more humble about our place on the planet?”

Correction July 23, 2021: The 100-person death toll mentioned in this story occurred in Oregon, not Portland, as previously written.