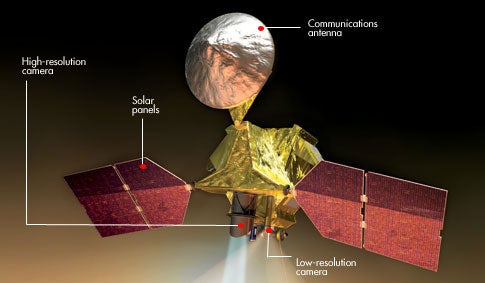 The search for water on Mars will intensify next month
when the Mars Reconnaissance Orbiter, the largest, most powerful spacecraft ever sent to the planet, launches from Cape Canaveral. This marks the first mission to Mars since the twin rovers Spirit and Opportunity beamed home hard evidence of once-flowing water. The MRO will orbit the planet 12 times a day, investigating whether signs of water are more widespread than just the approximately two square kilometers examined by the rovers. “If I investigated Los Angeles and Yellowstone, would I be able to understand what the entire planet is like here on Earth?” asks James Graf, the MRO’s project manager at the Jet Propulsion Laboratory in Pasadena, California.

After its arrival in 2006, the orbiter will spend two years scrutinizing Mars with six scientific instruments, including the most powerful camera ever launched to another planet, a radar system designed to image ice buried underground, and a weather camera to analyze the atmosphere. The craft’s high-resolution camera will also run recon, tracking prime landing spots for next-generation rovers and possibly turning up clues to the mysterious disappearance of Britain’s Mars lander Beagle 2. With any luck, the MRO will also confirm new evidence indicating that NASA´s Mars Polar Lander, missing since 1999, crashed to the ground after its thrusters malfunctioned.

Search for Lost Spacecraft
Britain´s Beagle 2 lander went silent shortly after entering Mars’s atmo-sphere in late 2003. A yearlong independent investigation couldn´t uncover a clear cause of the failure. Scientists plan to search for the remains of Beagle 2 as well as NASA´s failed Mars Polar Lander using the MRO´s Hi-RISE camera. They hope images of the craft will reveal what doomed the spacecraft. Yet any search would steal time from science operations. “We can detect [Beagle 2] if we know where to look,” says Alfred McEwen, director of the Planetary Image Research Laboratory at the University of Arizona and the principal investigator on the Hi-RISE camera. “But this could be a good way to burn a lot of data on a wild goose chase, so I´m a little bit leery of this whole business.”

Digital Pipeline to Earth
The instruments on the MRO will send back about 6,500 CDs´ worth of data-more than three times the amount returned by the combined missions of Mars Global Surveyor, Mars Odyssey, Magellan, Deep Space 1 and Cassini. The MRO will also serve as an orbiting relay station, beaming to Earth data from the Phoenix lander, scheduled to arrive in 2008, and the Mars Science Laboratory in 2009.

The Clearest Eyes
Orbiting 255 to 320 kilometers above Mars’s surface, three cameras will work together to image the planet’s terrain. In addition to the weather camera, the Context camera will image 30-kilometer-wide swaths of the surface at low resolution, targeting the most intriguing spots for further study. The Hi-RISE camera, on the other hand, will snap images detailed enough to spot a pizza box. Although it will be able to cover only one tenth of 1 percent of the surface in its highest-resolution mode, its 1.5-meter telescopic lens will give the MRO more than five times the resolution of its predecessors.

Underground Investigations
The Mars Odyssey spacecraft found ice just a few inches underground. Roger Phillips, the team co-leader of the SHARAD radar experiment on the MRO, wonders if that ice is literally the tip of a great iceberg. The SHARAD radar beam will penetrate up to one kilometer beneath the surface. As it passes through, any change in the ground composition-say, a boundary between rock and ice-will reflect part of the beam back to the spacecraft. A map of these reflections will reveal not just where the top of the ice layer is, but the bottom as well, allowing researchers to calculate the total volume of water now trapped inside Mars.