Watch the Planets Line Up With Crescent Moon in Rare Conjunction

Look toward the west tonight and you’ll see Jupiter and Venus together, lining up with the crescent moon in a... 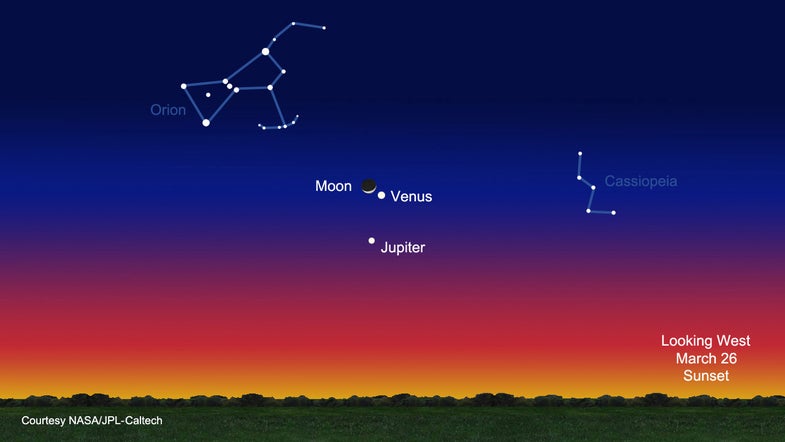 Look toward the west tonight and you’ll see Jupiter and Venus together, lining up with the crescent moon in a rare and beautiful conjunction. Venus is so bright you can see it during the day today, a few degrees above the sun, just like Abraham Lincoln famously did during his second inauguration. Cloudy skies? No problem — check here for a live feed of this event.

On March 4, 1865, crowds attending Lincoln’s inauguration noticed a bright star in the daytime sky, and even Lincoln himself pointed to it, according to an account posted at Space.com. Lincoln bodyguard Sergeant Smith Stimmellater described it thusly:

“It was a little after midday at the time I saw it, possibly near one o’clock; the sun seemed to be a little west of the median, the star a little east. It was a strange sight. I never saw a star at that time in the day before or since. The superstitious had had many strange notions about it, but of course it was simply owing to the peculiarly clear condition of the atmosphere and the favorable position of the planet at that time. The President and those who were with him in the carriage noticed the star at the same time.”

Good for Stimmellater for pointing out the physics and ignoring the superstitious. For hundreds of years, this alignment would have sparked talk of bad omens, but today it just looks lovely. It will be the best Venus-Jupiter conjunction for years to come, so enjoy the view.