Okay, who left their glasses on Mars? 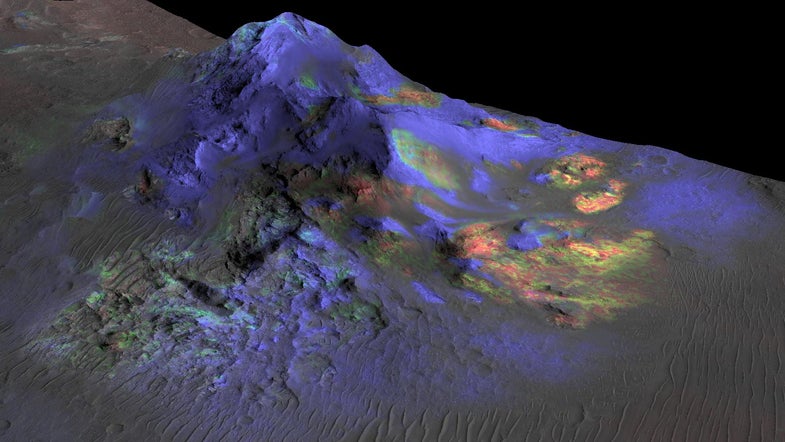 Glass (in green) found in the Alga crater on Mars. NASA/JPL-Caltech/JHUAPL/Univ. of Arizona
SHARE

It seems like Mars has just about everything: auroras, water, and now… glass?

In a paper published recently in Geology researchers announced that NASA’s Mars Reconnaissance Orbiter (MRO) found deposits of glass in craters on the Martian surface. These are the first deposits ever found on Mars, and they could help us figure out if there was ever life on the red planet.

On Mars, the glass was created when meteorites slammed into the Martian surface with enough force to melt some of the rocks, which then cooled quickly enough in the atmosphere, turning them into a type of glass known as impact glass. On Earth, scientists have shown that some impact glass contains tiny amounts of organic material from the time when a giant meteorite struck our planet millions of years ago.

Researchers hope that if life ever did exist on Mars, there might be some trace of it preserved in the glass deposits from when meteorites once hit. It’s a long shot, but there’s a very real possibility that NASA will at least be able to test the theory. One of the possible locations for the next Mars rover (launching in 2020) contains glass deposits.

Glass is formed in nature when melted rock solidifies so fast that the atoms moving around in the molten material don’t have time to line up in nice orderly formations—the way they would if they were able to cool down slowly. Instead, the atoms freeze where they are, creating the hard, shiny, brittle glass surface that we all know and love.

One type of natural glass you might have heard of is obsidian, a glass that is formed by volcanic eruptions when lava cools in just the right way. Yes, obsidian is the inspiration for the Dragon Glass in Game of Thrones. We have yet to know if the Martian glass can kill White Walkers, however.