We knew temperatures at the Martian surface were volatile, but it turns out the barometric pressure regularly fluctuates as if a hurricane were passing over. 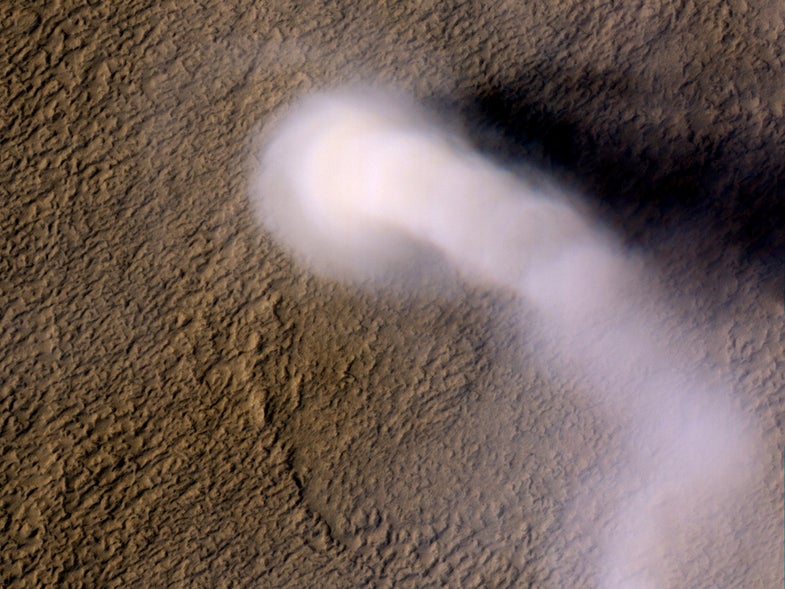 Mars Rover Curiosity is above all a robot geologist, but that’s not stopping it from tracking weather on the Red Planet as well. And what strange weather it is. The latest exciting result from Curiosity: atmospheric pressures at some places on Mars swing wildly throughout the day.

We’ve long known that temperatures on Mars can vary widely over the course of a single Martian day, as its thin atmosphere and lack of stabilizing oceans make it particularly sensitive to the coming and going of the suns rays. But what we didn’t know (though we previously have theorized) is that barometric pressures change radically throughout the day as well, at least in certain places.

During a Martian day, the pressure can deviate from the daily average by as much as 10 percent. Comparatively, Earth’s pressure on a normal day might swing one-tenth of 1 percent above or below the average pressure. The kinds of pressure swings recorded regularly on Mars are akin to those that only occur on Earth when an extremely strong hurricane rolls through a region.

Researchers have theorized that at certain points on Mars–at two “action centers” along the equator on opposite sides of the planet–pressures would fluctuate like this. Curiosity happened to land right in the middle of one of these zones, apparently confirming this theory. These pressure swings could provide an explanation for some of the other strange Mars weather we have observed, like massive dust storms that envelope large parts of the planet from time to time or even Mars’ periodic dust devils like the one seen above.