Now entering its ninth year of operation on Mars, NASA’s Opportunity rover is proving that there’s not much it can’t... 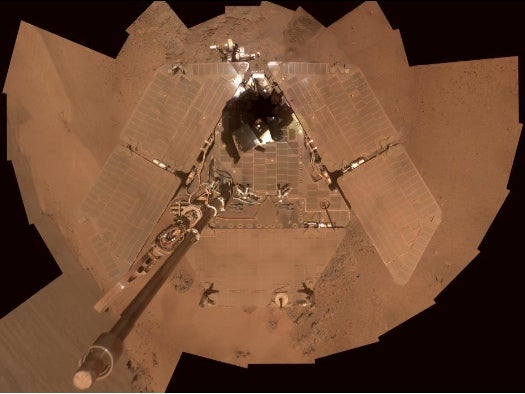 Now entering its ninth year of operation on Mars, NASA’s Opportunity rover is proving that there’s not much it can’t do. It’s even getting into self-portraiture to pass the time. The image above was stitched together from pictures snapped by Opportunity’s panoramic camera (or Pancam) back in December, showing the accumulation of dust on the rover’s solar panels as it prepares for its fifth Martian winter.

The self-portrait is presented in what’s know as approximate true color, or the imagery team’s best guess at what the environment would actually look like if a person were standing there seeing it through human eyes. “There” is a place known as Greeley Haven, where Opportunity is spending the winter on a sun-facing slope to keep its solar panels in an optimal position during several months of shortened daylight.

Oh, and just to clarify, the mast upon which the Pancam sits has been omitted from the image. So while it may appear that some other party snapped the image, we assure you Opportunity is all alone up there. At least, that’s what NASA wants you to think.