This is definitely not TSA compliant. 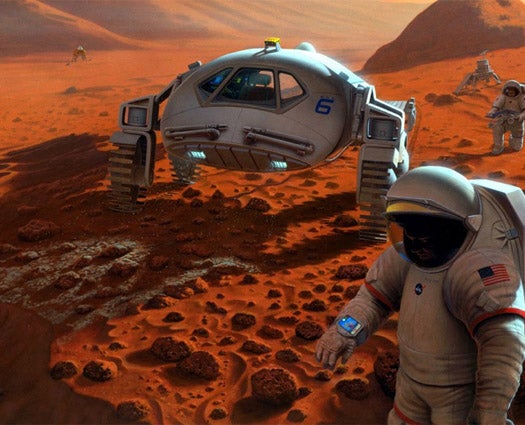 The term “suitcase nuke” hasn’t enjoyed a particularly popular connotation in recent years, but researchers convening at the 242nd National Meeting and Exposition of the American Chemical Society this week think such a concept is the future of interplanetary space travel. Scientists supporting a joint NASA/DOE project to develop future power plants for space colonists envision the first such power supplies being suitcase-sized fission reactors that future space explorers could deploy quickly and reliably in the harsh environs of another planet like Mars.

These mini-reactors would have no cooling towers or billowing steam clouds emanating from them. Rather, they would stand about two feet tall and maybe a foot wide, with a compact uranium fission chamber and power plant tucked inside. Unlike the solar panel systems often deployed aboard interplanetary missions–like the Spirit and Opportunity rovers currently on Mars–a small fission system could supply the kind of constant, steady power necessary for human survival on another planet.

That will be key for establishing a beachhead on another planet, as everything from life support systems (oxygen supplies and carbon dioxide scrubbing, for instance) to water treatment to keeping the lights and heat/cooling on will rely on around-the-clock energy. Any lapse in power, and the humans relying on those systems would quickly find themselves in a bad way.

Plus, such suitcase nukes would fit neatly in any future space vehicle’s overhead bins, defraying the cost of checking. The joint NASA/DOE initiative hopes to produce a working demo unit next year.