If there is complex life on another planet like Mars, it may look less like the big-eyed bipeds of sci-fi... 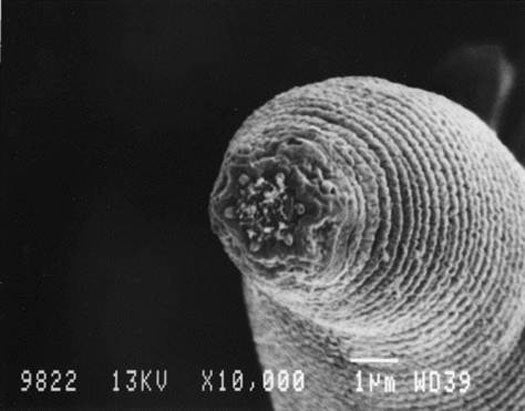 If there is complex life on another planet like Mars, it may look less like the big-eyed bipeds of sci-fi lore and more like a tiny, 500-micrometer long nematoda worm. A Princeton University team has discovered a new species of worm, termed Halicephalobus mephisto (after Faust’s demon Mephistopheles), at depths so deep that it was thought multicellular life couldn’t survive there.

H. mephisto was found thriving in three different gold mines in South Africa, where they’ve apparently been living in water and feeding off bacteria for thousands of years (carbon dating shows that they’ve been living at this depth for between 3000 and 12,000 years). Just how deep are they dwelling? H. mephisto was found as far down as 2.2 miles down, impressive considering that almost all multicellular life is found either on the surface or in the first 30 feet of the crust.

That’s because the conditions down there aren’t ideal for larger, complex organisms. It’s hot (H. mephisto can survive in temperatures up to 109 degrees), there’s no sunlight, little oxygen, and no food. Life down there is tough enough for single-celled organisms. Introduce the more complex energy needs of multicellular creatures to those environs, and very quickly the math doesn’t add up.

But the finding of these multicellular, complex life forms at such depths has major implications for life in the universe. It proves that multi-celled organisms can subsist completely isolated form other complex ecosystems, existing on the energy scavenged from single-celled, microbial communities. That means that any planet where surface life spawned at some point in history could still harbor complex life deep beneath the surface, even if surface life there had been extinguished.