Deep In The Earth’s Core, Clues About Its Mysterious Birth

To deduce how and when the Earth was formed, we need to know exactly what it's made of. 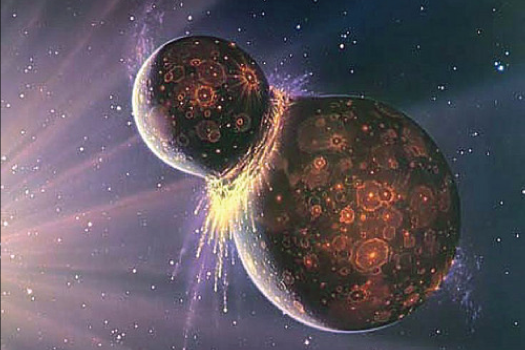 We’ve known for over half a century that the Earth is 4.5 billion years old, but for people like University of California, Davis geologist Qing-zhu Yin, that number just isn’t good enough–they need to determine what digit comes after the ‘5’. Yin has spent the last fifteen years trying to figure out exactly how our solar system formed–how, over a span of some tens of millions of years, a large chaotic disc of dust and gas turned itself into eight planets in orderly orbit around a central star.

Scientists have come up with a couple versions of the story: in one version, Earth emerged from an era of meteoric collisions so intense that the entire planet was, at first, a spherical sea of magma. In another version, the process was more drawn out–Earth was a rocky mini-planet where, every ten million years or so, something the size of Mars slammed into it and stuck, until finally all the Mars-size objects had either collided or–in the case of Mars itself–settled into an orbit of its own. But in order to figure out which version of the story is right, they need to know how long the era of ultra-violent planetary collisions lasted, down to a precision of tens of millions of years; in other words, they need to resolve the history of Earth to one more decimal point.

The secret to Earth’s exact age lies in the planet’s oldest rocks. Scientists can calculate an approximate age of those rocks by measuring the amount of two isotopes, uranium-238 and lead-206 the rocks contain. Because uranium-238 decays into lead-206 at a predictable rate, the ratio between the two isotopes tells scientists about how long the rocks have been around. But there’s a catch: in order to figure out what the relative proportion really tells us, scientists have to know exactly how much of each there was to start with. And in order to figure that out, they have to know how much uranium-238 and lead-206 there is, not just in the rocks at Earth’s surface, but also in the underlying mantle and–here’s the tricky part–in the totally unreachable, irreproducible core.

If that conclusion had held, researchers would be able to infer the amount of lead and uranium in the core based on the properties of iron and nickel. But in the 1950s, measurements of the core’s gravity revealed that Earth’s center wasn’t dense enough to be made of iron and nickel alone.

“We knew we needed some lighter elements to account for the density deficit,” says Yin. It didn’t take scientists long to come up with a list of possible suspects, since the elements had to be relatively abundant in the solar system. “So that rules out things like lithium, beryllium, and boron,” says Yin, “and leaves oxygen, silicon, magnesium, sulfur, carbon, phosphorus, nitrogen.”

But narrowing things down past that short list wasn’t so easy: the inner core’s remote setting and extreme temperatures and pressures made it virtually impossible to conduct useful observations or experiments to figure out which elements would have stayed in, and which would be squeezed into the mantle.

“So that makes computer simulations handy,” says Yin. Until recently, computers simply didn’t have enough power to run the kind of complex calculations necessary to simulate the inner core on an atomic level. But now, “computing power is at a state where we can do something reasonable.”

Yin and his colleague at the Chinese Academy of Sciences ran an experiment on a 500-core supercomputer for three months to determine which elements are in the inner core, and in what amount. They were particularly interested in measuring carbon, an element whose presence in the core is associated with a lower proportion of lead. The more carbon Yin found, the less lead there probably is in the core, and the less lead there is, the older the Earth.

The team’s results so far suggest that carbon holds only a tiny proportion of the core–something less than 1 percent by weight. Relative to the rest of Earth, that’s still a lot of carbon–it’s more than in the whole rest of the planet combined–but it’s a small fraction of the lighter elements in the core.

So far, the results support the short version of Earth’s creation story–the idea that a solid Earth formed as early as 30 million years after the birth of the solar system, and that the Earth grew in fits and starts, one major impact at a time, over the next hundred million years.

By using ever more powerful supercomputers, Yin, his colleagues, and other geologists are getting a handle on how to fill in the blank to the right of that 5.